Long Live the Queen: Aretha Franklin on Fashion and Her Future

Aretha Franklin, Queen of Soul, reminisces about the Obama inauguration and fashion choices. 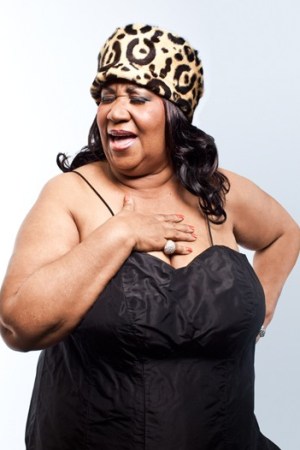 It’s three days before Aretha Franklin makes a pair of rare appearances at Radio City Music Hall (Sept. 17 and 18), but the Queen of Soul is still reminiscing about President Obama’s inauguration. “It was a magnificent moment,” says Franklin, dressed in animal print jersey, Chanel mules and plenty of diamonds while lounging over tea sandwiches in her hotel suite overlooking Central Park. “It just comes along once in a lifetime. [It was that] kind of moment.”

Although Franklin was not pleased with her own shining moment at the ceremony: a spirited rendition of “My Country ’Tis of Thee.” Perhaps her own worst critic, she blames the icy January air and an excited, sleepless night as the reasons behind her unsatisfactory performance. “I should have done what some of the other artists did, and that was to pre-record,” she says. (She went on to release a spectacular studio cut, “Aretha Franklin’s Preferred Version of My Country ’Tis of Thee,” on iTunes in February.)

However, Franklin has no regrets when it comes to her gray wool coat from Tom and Linda Platt — a favorite design duo, whose taffeta gown she chose to wear for this shoot — and that now-famous bow-bedecked hat by Detroit-based milliner Luke Song. As happy as she was with the chapeau, which has become a national artifact, she never expected it to receive such attention. “It just took on a life all its own,” she says with a pause. “Well, I do have good taste, I do have good taste.”

As do most New Yorkers, something Franklin knows quite well. “They’re so sophisticated. They’ve seen the best of everything, so you’ve got to really have it together when you come to New York,” she says, adding that when it comes to her set list, “people want to hear the hits and so I give them what they want.” Indeed, her Thursday- and Friday-night shows here are likely to include such lasting hits as “Respect,” “(You Make Me Feel Like) A Natural Woman,” and “Chain of Fools.”

Regarding her fashion sense, Franklin thinks it “has and it hasn’t evolved” throughout her half-century-long career. For one thing, she has always delighted in fine, often surprising details and sumptuous fabrics. One of her first stage outfits, she recalls, was a black silk velvet gown with a brocade underskirt that she would reveal via a subtle flip toward the audience as the young performer took her seat at the piano. “Oh, it was fabulous,” Franklin remembers. “That kind of set the pace for my taste in fashion.”

In the Sixties, Franklin favored designs by Ceil Chapman (a Marilyn Monroe favorite) before moving on to Chanel, Bill Blass and Valentino. Her fashion mantra? “Never anything too fitted or too tight,” she says. “Not good for the diaphragm and singing and expanding — and I have a short waist, so I always favored the Empire look.”

Nowadays, most of what the artist wears (be it to shows, private engagements, the odd inauguration) is custom made, a result, she admits, of her weight gain and, seemingly, her desire to have things just so — a standard not limited to fashion. For this interview and shoot, she made several specific requests: Everything had to take place below the fifth floor (she has a fear of heights and flying), no air-conditioning and only four other people in the room at one time.

Yet her next big project will take her face-to-face with at least 20 people, aspiring singers, to be exact. Starting in November, Franklin, who says she is “semiretiring,” will lead twice-weekly vocal classes at the Westin Hotel in Southfield, Mich.; a New York master class may follow. “It’s a natural progression,” she says. “I want to see what singers are coming along and who they are going to be, in my opinion.” She doesn’t have any students just yet, but is “going to put out the call and do the auditions and we’ll go from there.”

And, though she is quick to decry the lack of “the legends” on the radio — “there’s a huge, huge audience out there for the Robertas, the Dionnes, the Streisands” — she says she enjoys listening to contemporary artists, including R&B singers Maxwell and Keyshia Cole, both of whom she covers in concert, as well as Diddy, Fantasia and Jennifer Hudson. And yes, she witnessed Kanye West’s pro-Beyoncé Knowles outburst during Taylor Swift’s MTV Video Music Awards acceptance speech. “I saw it. I was watching. That’s my industry,” she says. “I think that Beyoncé [letting Swift finish her speech] was very classy and very appropriate.”

Franklin is also working on an album that she plans to sell via QVC and possibly distribute through Wal-Mart. It’s called “Aretha: A Woman Falling Out of Love.” (“With an emphasis on ‘out,’” she says, avoiding details.)

Still, perhaps the musical project most important to her is also the smallest: her granddaughter, Victory. “She is going to be a singer,” Franklin proclaims, nodding her head for emphasis. “Victory will have the victory.” The 10-year-old performed for the first time last summer during one of Franklin’s shows at the Borgata in Atlantic City. “I asked her, ‘Victory, what are you going to sing?’ She said, ‘Grandma, I wanna sing Alicia Keys.’ And I said, ‘Did you say, ‘Aretha, please’? You got to learn Grandma’s songs!” Franklin says in mock annoyance. In the end, though, Victory defeated Grandma this time around, belting out “No One” by Keys.