NEW YORK — After more than 40 years in the fashion business, Lonsdale London is crossing the pond.

The British sportswear company, which gained commercial success in the early Sixties, will finally be available in the States beginning in... 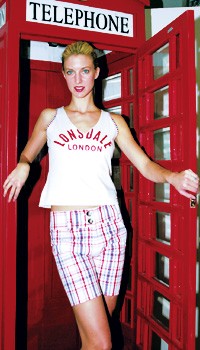 NEW YORK — After more than 40 years in the fashion business, Lonsdale London is crossing the pond.

The British sportswear company, which gained commercial success in the early Sixties, will finally be available in the States beginning in early summer.

“This women’s collection holds on to the classic British image, but we mixed it with a bit of the American contemporary style,” said Elva Shkrelli, head women’s designer, in the Lonsdale London showroom here this week.

In the Sixties, Lonsdale London gained recognition in the boxing world because English championship boxers were always awarded a traditional Lonsdale belt. Soon, the name was attached to athletic gear and equipment, and boxers from Muhammad Ali to Lennox Lewis became fans. Since then, the company has evolved to include an expansive men’s collection, but the women’s line was traditionally limited to Ts and sweatshirts. In recent years, the company expanded its business to Japan and Italy, but the U.S. women’s collection, the most recent development, will be the most expansive to date.

“We want to be a leader,” said Gary Furey, vice president of sales and marketing for Lonsdale London. “The other markets are still more logo-driven,” he said, referring to Japan and Italy. “We can’t run away from the heritage, and we don’t want to. We just can’t emulate that here because the product is at a different price point. Plus, we’re adding more feminine touches. We want this collection to be more fashion-forward.”

The apparel company, Check Group LLC, holds the license for Lonsdale London’s North American distribution. The company also has deals with brands such as NBA by UNK, Apple Bottoms by Nelly, Phat Farm, VOKAL by Nelly and Krome, the luxury sportswear brand. The licensing deal with Lonsdale London was signed last spring.

Shkrelli was aware of the company’s past and wanted to incorporate the tradition into each of her youthful pieces. She also looked at vintage English matchbooks for inspiration. The collection, as a result, is fun and girlish but detail-oriented. Each piece undoubtedly pays homage to the company’s British roots: Rivets are engraved with the British flag; red, white and blue color combinations are seen throughout, and, of course, the Lonsdale London lion logo is emblazoned on each item. Wholesale prices range between $50 and $350.

While the men’s collection is “Geek Chic,” said Furey, the women’s collection is more “Street Chic.” Shkrelli said key pieces include long plaid shorts, three-quarter length shirts and flared cotton skirts. “I think these girls are more into the lifestyle than the activewear,” she said, defining her consumer.

Lonsdale London has plans to target specialty boutiques and is expecting to be on shelves by May, although no accounts have been secured yet. Currently, there are no plans for a freestanding store. The company predicts its wholesale volume for the women’s and men’s collections for the first year will reach approximately $10 million to $15 million, with the women’s volume accounting for 60 percent of the entire volume.

Furey believes Lonsdale London will succeed in the U.S. as long as it pays attention to tradition while keeping a sharp eye on the trends of today. “The whole market is going in a more feminine direction,” he said. “Really, it’s about achieving a lifestyle.”