Sportswear and dress vendors are finding plenty of cause for optimism in 2005. Most makers are planning on double-digit gains for the year ahead, thanks to an economy that remains tenacious in its bid for a sustained rebound. 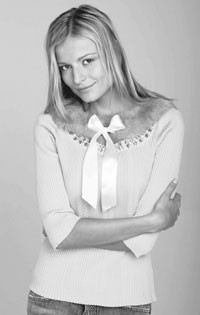 Sportswear and dress vendors are finding plenty of cause for optimism in 2005. Most makers are planning on double-digit gains for the year ahead, thanks to an economy that remains tenacious in its bid for a sustained rebound.

Vendors are revved up with larger orders from specialty store accounts that are determined to beat mass giants by offering destination styles and more private label.

The new glamour quotient that’s leading fashion consumers to dress up instead of down is also a positive for the business as firms are diversifying their assortments with trendier but wearable styles.

Creativity is taking on other forms, as well, as vendors are looking toward growth by launching new lines, reaching out to customers with highly focused campaigns and expanding into untapped wholesale territories, among other tactics.

And, thanks to the end of the global quota system, many companies will enjoy fewer production restrictions.

Competition from big-box retailers coupled with a change in customer demands for unique looks have inspired sportswear and dress vendors to update their lines for a more fashion-forward approach.

“We’re really diversifying our fashion offerings and making it look much more contemporary with a touch of European trends that we see on the runways, such as a new knit sweater line and lots of beautiful and more forward colors,” said Ravi Kukreja, owner of Toofan Inc., in North Bergen, N.J. “It’s about offering unique items that specialty stores can use as a tool to beat mass and fast-fashion discounters.”

Wholesale volume at Toofan is planned to be up 20 percent in 2005, and the company now has at least 300 retail accounts.

national sales manager. “We’re very product-driven and the most important thing that we’re doing now is staying on the front edge with fabrics such as embellished silk charmeuse, updated silhouettes that now are a bit looser and major trends such as jackets, camisoles and lots of pants in a wide range of styles. To build volume, the most important thing to have is the right product.”

Tribal Sportswear does business with some 2,000 specialty stores across the U.S. and Canada. Sales numbers for 2005 are expected to be very healthy, according to Brown.

“The styling continues to cater to a young misses’ customer who expects fashion and newness in bodies that are understandable,” said Taub Kahn. “Both Oleg Cassini Sport and Oleg Cassini Weekend continue to offer fresh color combinations and innovative palettes.”

Robust business has led many vendors to look toward growth, with each applying different strategies.

Joseph Ribkoff, in Montreal, is concentrating on adding in-store departments at many of its specialty store accounts, said Amy Belluck, sales manager.

“The in-store departments have proven so beneficial to our volume, so we’re continuing to roll them out across the U.S. in select accounts,” she explained. “We already have them all over Europe. It has improved the business and increased multiple sales.”

She said the company is expecting a 20 percent sales increase in 2005.

“Women in the U.S. are getting bigger, especially in the waist, and many retailers continue to expand their plus-size departments to accommodate these shoppers. So we’re offering more plus-size styles from 1X to 5X and concentrating on making the looks more fashionable,” said Hodges. “These women follow fashion and refuse to look dowdy or matronly.”

Hodges said Soho’s plus-size business is about 30 percent of its total volume, and he expects that to rise at least 10 to 15 percent in 2005.

“So we’re going to offer a full day dress collection for fall selling,” he said. “Many of our stores are asking for day dresses with subtle touches of glamour such as luxe fabrics and embellishment that is quietly elegant.”

Kasher said La Femme has at least 1,000 retail accounts and is expecting triple-digit volume increases for 2005.

A WORLD OF DIFFERENCE

The end of the quota system in China will pose challenges to many fashion manufacturers. However, in this category, most vendors have foreseen those challenges and prepared for them.

Victor Rousso, president of Rousso Apparel Group, said the end of the quotas this year as well as the uncertainty of safeguard quotas being imposed on apparel and textiles in the future have changed sourcing forever.

“Every major retailer and manufacturer has moved a large amount of production to China, creating a massive demand on the country’s production capacity,” he explained.

He said the company is immune, however, due to a 20-year-plus relationship with its manufacturing partners. Rousso Apparel also has maintained many of its offshore production facilities to help stabilize sourcing and avoid the risks of overcapacity in China.

Honolulu-based Tori Richard also has a longtime relationship with its offshore manufacturers.

“As a company that has been firmly entrenched in offshore production for 40 years, we do not feel a change with quota expiration,” explained Josh Feldman, president.

Feldman added, however, that changes in the quota system will help them to provide the best quality at competitive prices.

Tribal Sportswear’s Brown said she also is looking forward to the change in the quota system.

“The end of the quota system helps a company to source and price to their best advantage,” she explained. “We produce in Bulgaria, China and Canada and take a global outlook when it comes to sourcing. When deciding where to produce a garment, we factor in the specific product, style, fabric and trend, and search for the best factories to do the best job at the best prices.”