Looks for Beyond the Mall

NEW YORK — Buyers striving to put together assortments that are anything but mall-ish should find some good fishing at the Designers & Agents trade show, set for Sept. 27-29 at the Starrett-Lehigh Building in Manhattan. 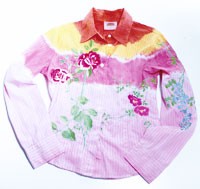 NEW YORK — Buyers striving to put together assortments that are anything but mall-ish should find some good fishing at the Designers & Agents trade show, set for Sept. 27-29 at the Starrett-Lehigh Building in Manhattan.

Smaller stores said they use trade shows such as D&A to set themselves apart from nearby national retailers, since they lack the economies of scale to compete on price. Besides, many women who shop in such stores are looking for fashions that aren’t widely distributed.

“Our customer who shops at D&A — they’re boutiques — are pretty sophisticated, sometimes ahead of the trends,” said Rory Moore, showroom director at Nyali, which specializes in accessories. “They’re looking for quality versus quantity. They’re very distinguished. They’re really trying to establish themselves outside of the mall and bring something new to the community.”

D&A has “edgier collections” for stores looking to stand out, said Susanne Rehnstrom, manager of Bond 07 Showroom, which will have nine lines at the show, each with its own look.

For one, Bond 07 will have the causal line Fancy Pony Land, which is handcrafted and inspired by nature, with animal and floral motif appliqués. Bond 07 has been actively promoting its designers for the show, reaching out to new and familiar stores in the U.S. and abroad with mailings that feature a designer’s name on one side and the showroom’s on the other.

Bond 07 also has a New York store, where business has been improving.

Becky Rosenberg, owner of the Butik showroom, which mostly carries accessories but has some apparel, said business continues to strengthen.

One of her hot lines is Allison Burns handbags, manufactured in Los Angeles. The contemporary line of leather bags wholesales for $45 to $275. Allison Burns features a vivid color palette, soft leather and utilitarian accents such as key hooks and cell phone pockets.

Viveka Willner, national sales director for Alvin Valley, said the Alvin Valley As Is line, which will be shown at D&A, benefits from buzz generated at the designer’s runway show.

“Alvin’s been around for three-and-a-half years now and his name is being recognized,” said Willner. “He’s out there. They’re buying [the line] as a collection now. We used to just be a pants resource.”

Alisa Greenspan, owner of the Capital A showroom, is looking for big things from Yim, a vintage-inspired collection in its third season that has expanded from jackets to include dresses, skirts and camisole tops. The collection makes use of vintage buttons, pins, linings and fabrics from the Fifties.

For spring, camisoles come in solid and printed versions with lace and are made to coordinate with the tailored jackets. Yim wholesales for $42 to $250.

Capital A is prospering, with its higher-end retailers ordering more contemporary looks and selling them well.

“Our stores have been quite strong,” Greenspan said. “We’ve been adding some deliveries to some of the collections,” she said, pointing to Yim and Shopaholic, which have added holiday and resort to their four other seasonal shipments.

Melinda Rogers, public relations and marketing manager at Fashioncamp, a New York showroom for Scandinavian designers, will be at D&A with a few lines, including Designers Remix Collection. The contemporary line comes out six times a year and includes flirty skirts and tops with a Western theme.

Rogers said the U.S. market for Scandinavian fashion is wide open, which gives the showroom’s offerings a flair of their own.

“The Scandinavians are very detail-oriented,” she said, pointing to pieces with scalloped edges.

Business can be expected to go both ways geographically at D&A, with domestic buyers snatching up international lines and foreign buyers picking up local looks.

Stephanie Larrowe, owner of the And Cake collection, which consists mostly of shirts with details such as hand-dyeing and embroidery, said she has picked up a lot of accounts at the shows.

“We are doing a lot more business overseas — a lot of Japanese accounts, a lot of accounts from Denmark and Paris,” she said.

One upside is that the foreign stores tend to place larger orders, perhaps because it would take longer for them to receive reorders. Larrowe said her average order from abroad weighs in at between $5,000 and $10,000, while domestic accounts average between $2,000 and $5,000.

New to D&A will be Ana Lerario, who has brought a designer background, having worked for Marc Jacobs and Tse, to her new job as proprietor of the Fifty Two Showroom. Lerario opened her showroom just a few weeks ago. Her philosophy is: “I want to keep each designer’s sensibility true to what they are.”

For spring, she said, “there’s a very sophisticated side to all of the clothes. It’s much more cleaned up, it’s not so gimmicky anymore.”

Giuliana Civello, vice president of ICOT Showroom, will have several lines at the show, including 120% Lino, a linen collection new to D&A. The contemporary-leaning 120% Lino has lots of novelty pieces, some interwoven with gold treads, as well as some embroidery. Wholesale prices range from $50 to $180.

ICOT has started doing p.r. for its lines, trying to get more exposure from magazines and working on some advertising. Civello also said business has picked up with accounts buying deeper into lines and walking away with larger quantities.