"Let me just do my thing, and then we can start taking pictures," a very focused Jennifer Lopez directed. 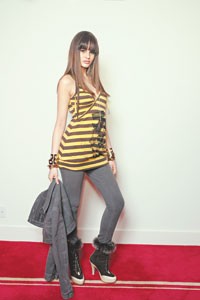 NEW YORK — “Let me just do my thing, and then we can start taking pictures,” a very focused Jennifer Lopez directed as she fussed over models’ looks, flattening hair, adjusting earrings, tucking leggings into boots.

The megastar (with husband Marc Anthony in tow) was at the Gramercy Park Hotel on Wednesday to show off her latest venture, a junior clothing line she’s calling simply “justsweet.”

“Let me just tell you, I am aware that it is supposed to be two words,” she quipped. “But I like the sound of it as one word. It just flows.”

Lopez clearly has an eye for what looks best, down to the last detail of a particular look.

“Walk a little like this,” the singer-actress said, doing a twirl (leaving a hint of the Glow by JLO scent she was wearing) to show a model how to pose for the shoot. “For lack of a better phrase, we are bringing the sexy back with this new line.”

Since Lopez launched her clothing collection JLO by Jennifer Lopez in 2001, the industry has questioned her involvement in the brand and even challenged whether she actually wore the clothes herself. But today, Lopez, dressed in a black Sweetface dress, is totally involved as she makes the finishing touches.

“Five years ago, I had a lot to learn about this business,” she admitted. “And as I learned, I became more involved in the day-to-day. Now I am in the office all the time, and I have been since we did the fashion show [in February 2005]. I was there every single day, going over every tiny detail. As I got through the learning curve, I became more involved and will continue to be.”

Lopez continues to have a lot on her plate. Although she hasn’t had an album released in a while and her last big film, “Monster-in-Law,” was released in 2005, she hasn’t been slacking off. She just finished her first Spanish-language album, which will be released soon; she has been in the studio recording an English-language album, which she hopes will be ready for a holiday release, and she is working on various film projects, two of which she is producing and starring in, “El Cantante” and “Bordertown.”

The justsweet brand enters the industry at a time when other celebrity brands are suffering at retail. JLO by Jennifer Lopez has been experiencing slow sales in the U.S., and other brands like Jessica Simpson and House of Deréon by Beyoncé Knowles are also driving down a bumpy road. Lopez admitted her brand has struggled, but said it was all part of the learning process.

“I have a great team in place, and personally, I have learned a lot. I’ve learned to say no to some things so that I am freed up to do the things that I love to do,” she said. “Everyone has to learn and to grow, and I really believe that we are getting better while we are doing it.”

The justsweet collection is a diffusion line to her higher-end contemporary brand, Sweetface, she said. Made for department stores and launching for back-to-school, the brand will replace JLO by Jennifer Lopez, which has been suffering at retail in the U.S.

“I’m different than I was when we first launched,” Lopez said. “The JLO line is more casual and street, and it was who I was. Now this is me. I’m more ladylike, and so is this line. The clothes are better quality and much more fashionable for the department store.”

JLO by Jennifer Lopez is being pulled from department and specialty stores in the U.S. Internationally, Andrea Scoli, president of Sweetface Fashions Inc., said the brand is growing quickly, with 17 freestanding stores in operation and 20 more openings planned for 2007.

“I put my heart into everything I do, with music, with acting and with fashion, which is really my passion,” Lopez said. “I’m not sure why one thing works here and not there. I don’t know why one song is popular here but not in London. All I know is that I put everything I have into everything I do.”

Scoli interrupted, “It’s her celebrity status. Internationally, that means everything, so the brand does very well.”

The justsweet brand will include everything from sportswear and dresses to a series of fragrances, which are being formulated by Coty; footwear (licensed to Titan Industries); eyewear (the Safilo Group), outerwear (Herman Kay); watches (E. Gluck), and, of course, jewelry (Haskell Jewels).

“I am such a jewelry fan, and I have a husband who just loves to buy me jewelry,” she said, showing off some major bling: a 14.5-carat rare blue diamond ring, given to her for their first wedding anniversary last year. The ring certainly tops the famous Harry Winston 6-carat pink diamond engagement ring from ex Ben Affleck. “When Marc gave it to me, he said, ‘We made it a year!’ It was a real celebration, let me tell you,” she said with so much excitement she could hardly stay seated.

There won’t be any 14.5-carat items in the justsweet line, but Lopez said, “[The jewelry] will be beautiful and will go very nicely with the clothes.”

The apparel will sit at the higher end of the junior sportswear spectrum, wholesaling between $11 and $89. The collection is focused around denim jeans, which Lopez said were a must.

“We really worked hard to get the fit right,” she said, pointing out the stitching detail on a pair of skinny-leg jeans. “I know I drove the girls crazy, but everything had to fit perfectly. I think we were successful. These are jeans that you would pay a lot of money for from another company — these are $59 retail.”

In addition, there’s an array of sexy tops, dresses, leather jackets, wool coats, hoodies with graphic treatments and cropped knit sweater cardigans with dramatic button details. Scoli said she expects to bring in upward of $10 million in wholesale volume for the brand’s first year at retail. The company says it generates $250 million in retail volume with JLO by Jennifer Lopez worldwide, the three fragrances by Coty and the Sweetface brand, which sells at high-end specialty stores.

The company is putting marketing muscle behind the new brand, with plans in the works for print ads in magazines like Glamour and Vogue, as well as an outdoor campaign. Also on the agenda is a larger-than-life fashion show during September’s New York Fashion Week, similar to the spectacle Lopez put on two years ago. Scoli said the fashion show will be so large, it will not be held at the tents at Bryant Park.

“Oh, it will be big,” Scoli stressed. “And if we have a different venue, we can really make the impact that we are looking to make.”