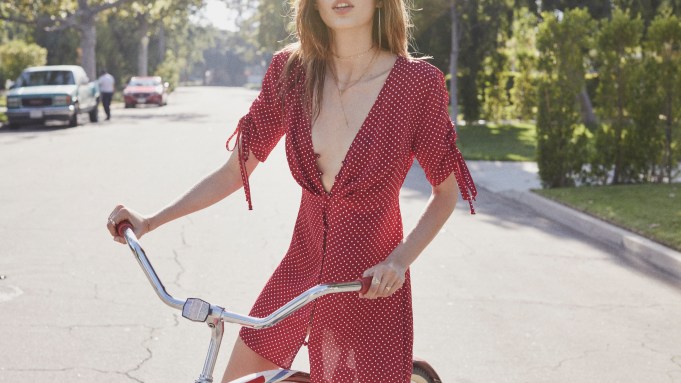 There’s an air of calm in For Love & Lemons’ downtown Los Angeles headquarters.

The inside very closely mirrors the same delicate, ethereal dresses — where necklines are the focal points, signed off with signature ruffles, flutter sleeves and lace — the brand has come to be known among a bevy of influencers who follow the brand, Rihanna included.

Soon enough, those operations will move as the company relocates and expands headquarters to Silver Lake, following a yearlong search to find just the right space.

“We have a very specific taste, so it was finding something that met all of our needs and it just felt right,” said cofounder Laura Hall.

She started the company with Gillian Rose Kern. The two, friends from Jackson, Wyo., have a partnership that goes back as far as a childhood lemonade stand (hence the company’s name). For Love & Lemons doesn’t disclose financial information, but Hall said the business is profitable. E-commerce accounts for about half of overall revenue. Last year it was about 30 percent, with wholesale making up the remainder, according to Hall.

For Love & Lemons can be found at retailers such as Revolve, Asos, Yoox, Nordstrom, Planet Blue and American Rag Cie.

The two are strategic in their longer-term goals for the brand, thoughtful in their push to build out a line that provides customers with the whole For Love & Lemons look.

They’ve taken steps to make good on that. In February, the company entered the baby and toddler space with the launch of Lil’ Lemons. The line with vintage-looking prints was designed in-house with the pieces made in Los Angeles. It was also a robust push into the market with bloomers, blouses, onesies, sun hats, dresses, legging, T-shirts and rompers. In May, the company rolled out bridal, a natural step, that adds to the existing ready-to-wear, lingerie and swim offerings. The collection, which includes dresses and lingerie, totaled about a dozen stockkeeping units with the highest-priced item a tulle gown adorned with 3-D embroidered daisies.

The company’s foray into footwear is a chic collaboration that’s out now with Los Angeles shoe brand Marais, featuring suede slides and strappy-heeled shoes with a knot detail. The shoes range from $295 to $330.

For Love & Lemons-branded footwear is expected to be around $250, with a collection likely due for spring and sold at least initially through the company’s online shop.

The company also just launched costume jewelry, the most expensive piece being a statement necklace at $125 that is available at wholesalers.

While the company has dabbled with one-day pop-ups and thrown popular sample sales locally that have generated long lines, a permanent door is something regularly considered, but not necessarily close to fruition.

“It’s really hard with how everyone wants everything so quick and they just want to shop on their phone. That’s kind of how our company grew is we were an Instagram-based company where people saw our images and then they went on our web site and bought stuff,” Kern said. “So for us, having a retail store is kind of moving away from that, but we’re not opposed to it.”

“A big challenge we’re facing at the moment is retail. Our retail outlets are having a tough time out there,” Hall said, adding to why the two exercise restraint when it comes to the business.

And unlike some of their peers in the marketplace, Hall and Kern remain sole owners of their company.

“We’re adamant about keeping it ourselves for as long as we can handle everything,” Kern said. “We like to have the control and we’re really specific about our image, so we don’t want somebody else coming in and trying to change it and manage it. So [outside investment] might happen in the future, but it will probably be a way’s out.”