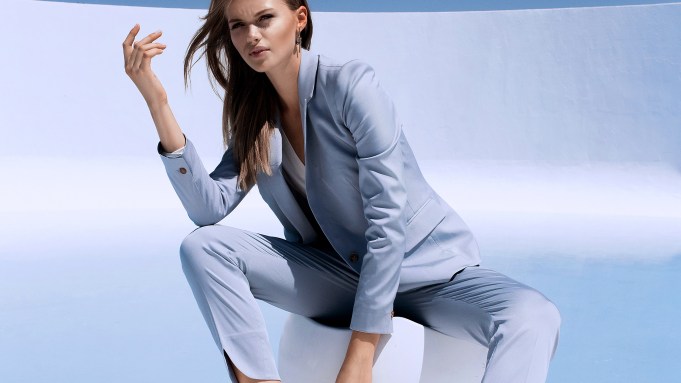 A downtown Los Angeles-based apparel firm thinks it has the right formula to succeed in the customization and made-to-order space, promising all the quality of an atelier backed by proprietary 3-D software.

Frilly, which launched in 2014, and has been refining its business model and building its technology, recently emerged out of beta with an online store offering customizable product to shoppers.

The opening price is about $60 and goes up to around $2,000 to be able to take the company’s stock of chic separates and tailor the necklines, sleeves, fabric and on down to the hardware used in the garment.

The company was founded by chief executive officer Shangwei Ding and chief marketing officer Jeni Ni and is entirely self-funded. It counts 24 employees in Los Angeles with a factory in China of about 80 and a software team of another 80. Tailors in China produce each garment, which goes through three rounds of quality control before being shipped to consumers within two to three weeks from the order date.

“We really want to bring the control back to the customer,” Ni said. “The age of personalization is upon us and we are bringing it to the customer in a way that hasn’t been done before.”

Orders are currently done on a desktop site. However, the company has plans to develop an app within the next year.

“Nowadays, the customers they’re very picky and…they want everything to hit a certain standard,” Ding said. “Other companies, the prices are too expensive or they couldn’t provide interesting options [the consumers] like. We can and then the quality is very, very important too because we believe that  [for] a new concept coming out, the quality has to be excellent.”

The company is currently a multibrand portfolio of three women’s lines: Herron, One Fifty Third and Saltt. Four, a minimalist line, is slated for launch in September. The idea behind multiple brands, said creative director Mansoor Amjed, is to cast a wide net in the market and appeal to a broad set of tastes, ranging from the customer who may gravitate to One Fifty Third’s sportier takes with cropped shells and jumpsuits to Herron’s more grown-up boho-chic looks or Saltt’s cutouts and other edgier detailing.

It’s also to hit the ground running and show the market what the brands’ parent is capable of doing so that there is potential in the future to produce lines for other companies, pointed out Ding.

The company does not currently have plans for permanent retail, but with the launch is now considering pop-up spaces as part of a marketing play to raise awareness among consumers. It would be a place where they would hope to be able to show customers how the customization works and also get across the quality level they’re promising, Ni said.

“It goes back to antimass production and really tying it back to quality,” she added.