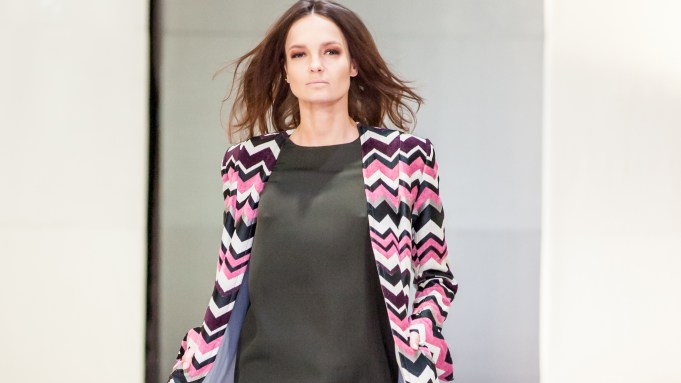 For her fall collection, Uruguayan designer Mena Lombard meandered through the middle decades of the 20th century, specifically the Sixties and Seventies.

The Sixties portion stuck mostly with a black and white palette, though it also offered some color-blocked sleeveless minidresses. The Seventies section piled warm tones — pinks, burgundies and creams — into chevron and circle prints. For one exit, Lombard mixed the best of both eras, pairing a chevron-patterned turtleneck with a pleated miniskirt.

Also on offer: dressy cigarette pants, wide-leg jumpsuits, capelet jackets and silk blouses. The designer also displayed fur in a number of forms, from muffs to vests to coats; the latter looked a bit ragged, like a dog that had just come in from the rain.

But at its best, the collection combined long, lean lines with feminine flair.