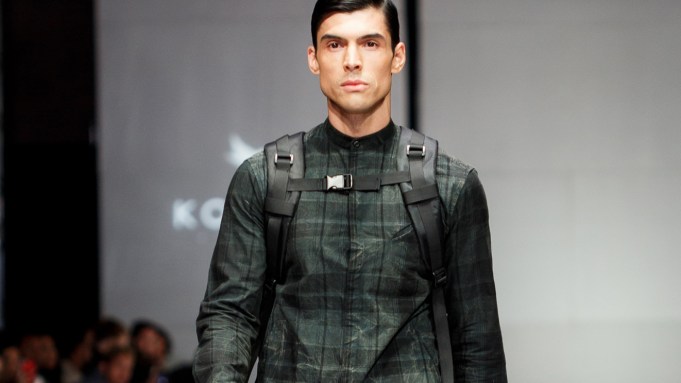 For his unisex streetwear line, Dax Hall stocked plenty of the usual bomber jackets, moto-style jeans and jogger pants. Upholding the common silhouette — long, rectangular top over skinny legs — he opted for a palette of muddy, faded or neutral hues, punctuated by a dash of plaid and camo.

But he also deviated from the norm with a few subtle twists. He spliced a black pullover hoodie with a big zipper above the stomach, shortened the sleeves of a light gray quilted jacket and raised the V-neck on a gray sweatshirt so high it resembled a mock turtleneck. He was also partial to dropping the crotch on several pants. For the more female-friendly designs, he cut out diagonal swaths on the side of black leggings and artfully unraveled the hem of a cable-knit fisherman’s sweater.

The total effect was edgy, but wearable, providing just the right amount of street cred.