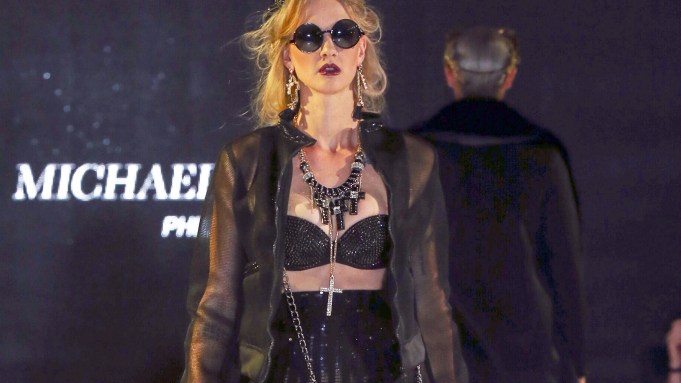 Los Angeles Fashion Week is increasingly becoming a stage for designers from other countries to build awareness Stateside, with its lower barriers of entry on a smaller fashion show calendar and, in the case of many designers from Asia, a more direct and organic leap to maintain and attract a trans-Pacific client base.

One such designer is Manila-based Michael Sta. Maria, a former nursing instructor whose second career has seen him recently representing the Philippines at Mercedes-Benz Stylo Asia Fashion Week in Kuala Lumpur, Malaysia, and in the U.K’s Scotland Fashion Showcase in November 2015. Filipino culture celebrates pageants and beauty queens — the current Miss Universe, Pia Wurtzbach, hails from the Southeast Asian archipelago — and Michael Sta. Maria caters to them with embellished eveningwear and bridal, debutante and red carpet gowns. In fact, he has made dresses for the 2014 Miss World Philippines, Valerie Weigmann.

Goth as well as galas inspired the fall 2016 collection, as evidenced by the mostly black palette, long sleeves and high necklines of some gowns, and the sheer mesh and netting with floral appliqués on others. The clothes appeared to be well-made and fitted, though Sta. Maria will likely hone his techniques with more experience. His finale look, a pale gold princess ballgown — in case anyone missed the point, many models walked down the runway wearing gold crowns — would be right at home in any of the glittering Asian capitals as well as Los Angeles, where black-tie private parties and weddings take place as often as movie premieres and awards shows.