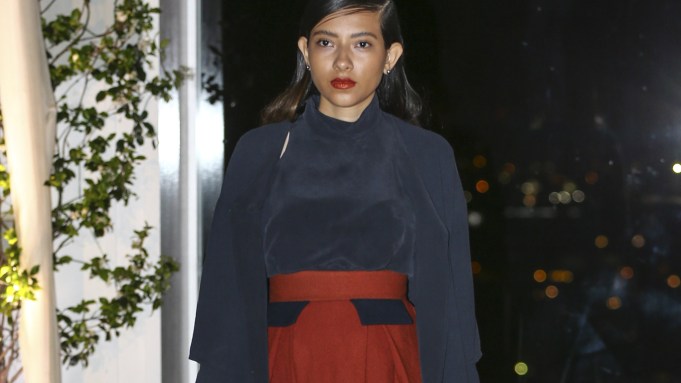 After sitting out the Los Angeles fashion week last season, designer Brad Parnell returned to show his seventh collection, a stark departure from the more embellished, romantic clothes he sent down the runway a year ago. “We decided to pare it down, and wipe the slate clean,” said Parnell, referring the approach that his husband and business partner Rodney Jones took to the design board and to their lives. After the hustle and bustle of their marriage last September, he wanted to create a safe, insular world, which also translated into cocoonlike, comfortable clothes for women.

One of his first inspirations was the inside of an ice cave, and the striations that appear in the cross sections of frozen land; both were evoked in a fabric made from sewn-together earth-colored yarns backed with felt. It appeared in culottes and long coats that offered both coverage and easy movement, accented with touches of forest green and clay-soil orange.

These wool coats and cropped wide-leg trousers weren’t as appealing as some of the more neutral pieces, namely a fluid floor-length white silk skirt with suspender straps that fastened through silver D-rings at the waist and a navy Neoprene coat with an asymmetrical black waistband.

The challenge now is for the duo to draw customers through their direct-sale model. But the collection’s minimal vibe should play well online, and strike a chord with women who e-shop for functional, easy-fitting pieces.