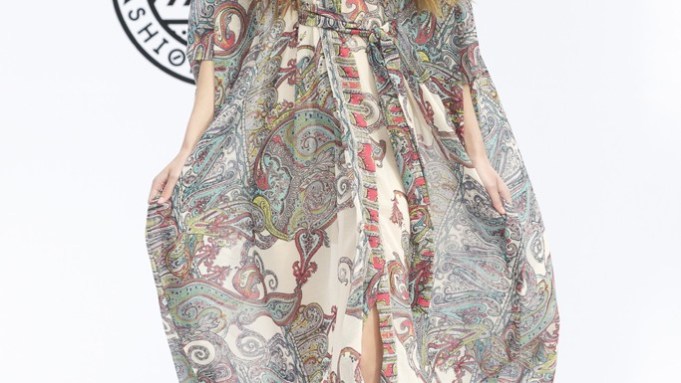 Check back daily for the latest collections from L.A. Fashion Week.

Aamber Aleyna: The collection gave women options for the office, an evening out or a day by the shore.

Altaf Maaneshia: His best look was a pair of navy silk high-waisted trousers worn with a cropped black velvet jacket.

Amabelle Aguiluz: The designer created a tribal-meets-contemporary collection of handmade knit tops and body-skimming dresses that was both unique and wearable.

Andre Soriano: The designer showed a collection with “punk de luxe” as its theme.

Bettie Page Clothing: Tatyana Khomyakova’s ode to the Fifties pin-up was a crowd-pleaser.

Chloe Evangeline: The designer’s collection is for women channeling the beach lifestyle with a touch of safari.

Dexter Jones: The designer sent out a range of flare-leg pants in everything from raw denim to leather and lace.

Donna Mizani: The designer sent out feminine and flowy cut-out maxidresses in lightweight sherbet colors along with body-conscious jersey numbers.

Emily Dacarett: The designer said the inspiration for her debut collection was the relationship between Serge Gainsbourg and Jane Birkin.

Furne One: The Dubai-based designer sent out a fantasy-based collection of looks that were meant to explore good and evil.

Gregorio Sanchez: The Mexican designer sent out a parade of earth-toned chiffon dresses and rompers.

Jen Awad: The designer likened her self-described “all over the place” collection to channel-surfing.

Katharine Kidd: The designer’s feminine tailoring was on fine display for spring.

Malan Breton: This lineup of gowns, cut in the same shiny fabrics as his suits, exhibited touches of Eighties drama.

Mathiasen: Matthew Mathiasen’s debut collection was inspired by his sporty girlfriends and how they mixed and matched separates.

Mike Vensel: Mike Vensel married his work as a painter and a designer with a collection of clean-lined long dresses done in a chiffon made from recycled plastic bottles.

Mister Triple X: While it was a small collection, Erik Rosete’s streetwear lineup was edgy and appealing.

Odylyne: Stephanie Lampkin loves a bohemian maxidress, and this season she added an edge to the simple silhouettes.

Paul Redmond: The designer continued his affinity for geometric shapes and themes with a black-and-white mosaic motif.

Piper Gore: The designer captured the casual luxury vibe with pieces such as a sunburst-yellow silk romper and a sleeveless tan cargo jacket.

Shail K: Kimi Verma is a former Miss Mumbai, which could explain the pageant vibe of her collection.

Sofia Palermo: Her best pieces incorporated hammered gold hardware into the necklines to give the look of statement jewelry.

The Bohemian Society: Victor Wilde worked in an all black or white palette in gauze, twill and suede.

XCVI: This casual contemporary line, founded by Gita Zeltzer and designed by Lilia Gorodnitski, took inspiration from the California desert and its flowers.