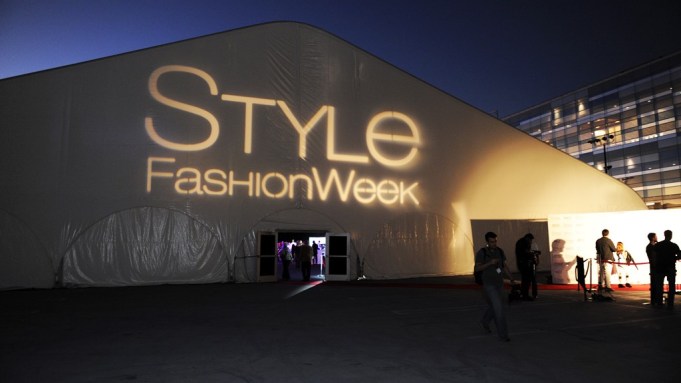 LOS ANGELES — Los Angeles is a city full of creativity, talent and celebrity. It boasts the largest apparel-manufacturing base and retail market in the country. It inspires numerous designers — from Hedi Slimane at Saint Laurent to the founders of Rodarte.

So why can’t it organize a major fashion week?

It’s a question that remains even as spring Los Angeles Fashion Week continues through the weekend, though there are signs that things are slowly moving in the right direction. For starters, the schedule, which kicked off Oct. 8, is significantly shorter than last season’s, which dragged on for a month. There were some promising new lines on the runway — Korovilas, Nuvula and Yoze among them. Show organizers found corporate sponsorships — L.A. Fashion Council partnered with retail center The Grove, which brought Citi and MAC to the table, and Style Fashion Week partnered with BMW and upgraded its venue to the L.A. Live complex. The Gen Art Fresh Faces in Fashion event, absent for a year, has also returned.

“L.A. is one of the most dynamic, fashion-forward cities in the world,” said Rick Caruso, founder and chief executive officer of Caruso Affiliated, which owns The Grove. “Aligning with L.A. Fashion Council gave us a platform to promote local talent, generating exciting energy at our property. With stakeholders who back its success, there is no doubt we can create something unique and lasting in this arena.”

New Los Angeles Mayor Eric Garcetti — who comes from a fashion family (his great-grandfather, Louis Roth, started a namesake men’s suiting company with retail stores called Eddie Harth in L.A., New York and Chicago) — has also pledged to support fashion week by “not just showing up at things, but letting the rest of the city know it’s happening. Connecting the 14 schools that teach apparel, going into our elementary and middle schools, letting people know the different fashion icons who are here.”

He added, “I think most Angelenos don’t even know there is a fashion week. But that’s where my communication shop, my business team and I ultimately try to use that bully pulpit and the megaphone that we have. I don’t think it needs to be dictated by the city, but certainly for folks who are interested in taking it to the next level, we are open for conversation.”

While no one would argue that there’s talent here — Slimane, Rodarte’s Laura and Kate Mulleavy and Band of Outsiders’ Scott Sternberg are among the many who choose to work in Los Angeles over other cities — what seems to be missing is an entity capable of uniting the right designers and sponsors into a cohesive event, like IMG did 10 years ago. “Fashion weeks succeed when there is an aggregate of great talent, and someone could get hold of [Los Angeles Fashion Week] and refocus it because there should absolutely be something happening there. People should be coming to see new talent and making that part of the message,” said Fern Mallis, who brought Mercedes-Benz Fashion Week at Smashbox Studios to Los Angeles from 2003 to 2008.

Since IMG exited L.A. in 2008, citing financial difficulties, organizers have struggled to form a unified event. Several groups tried to fill the void, some putting commerce before curation, which put off designers who didn’t want to be associated with certain brands or the party vibe of some events. Others staged indie events or one-off shows, resulting in a scattershot calendar and zero promotion of fashion week as a whole.

Some, like Sternberg, believe the city could do without shows. “Fashion week isn’t the answer to everything and probably not the answer for L.A. To try and mirror the fashion week schtick would kill the purity and creativity that’s the reason so many designers come here.”

Seeing opportunity, others persist. Style Fashion Week, produced by Bubblefish Media, which stages Style 360 in New York and Miami Swim Week events, offers a turn-key runway venue under a giant tent, but the budget ($5,000 to $15,000 a show) and pay-to-play vibe doesn’t appeal to everyone. Runway slots are available to seemingly anyone willing to pay, from kids’ clothes to clubwear, lingerie to sweats. “We’re open to any designer as long as they’re able to put on a good show,” said Bubblefish president Veronica Welch.

A spectacle for entertainment’s sake is one thing, a showcase for first-rate design is something completely different. Curation is sorely needed in L.A. to weed out subpar lines — the week saw more Spandex, PVC and stretch sequined minidresses than anything and it was questionable whether some of the models were professionals or friends, since better models may have improved the look of the clothes. But the event has returned for three years straight despite snafus such as hours-long delays (a show scheduled for 5 p.m. on Monday night started after 7 p.m., pushing the rest of the event past midnight and causing Dita Von Teese, one of the few celebrity attendees, to ditch). Those in attendance seemed pleased to ogle Kendall and Kylie Jenner, Alessandra Ambrosio, Bobby Brown, Adam Lambert and Lindsay Lohan, but it’s a far cry from Charlize Theron, Lucy Liu, Britney Spears and Reese Witherspoon, who attended in the IMG days.

Then there is the fundamental question of who the shows are for. Retailers were few and far between — and no major fashion directors attended. The audience was mainly made up of friends, hangers-on and anyone interested in “fashion.” Cedric Benaroch, co-owner of one of the more commercially successful brands, Day by Day, which sells in Fred Segal and Urban Outfitters, didn’t know whether any retailers attended his show. XCVI invited their buyers, including Kathleen Fowler from Sam’s Shop in Taos, N.M., who was in L.A. for Market Week. “It was a very exciting, fresh, vibrant presentation,” she said. “I experienced the collection in a fashion sense that I don’t always look for in the showroom. I’m much more practical from a selling point of view in the showroom. But because of the show I’ll step out of the box in the items I ordered.”

Retailers Mary Dawson and her sister Carole Brookshire of Revelation Tops in Montrose, Calif., were seated front row at XCVI. “It was a most enjoyable event. As a fashion buyer, it is inspiring to see the vision for the year ahead,” said Dawson. “To us, XCVI is the SoCal/L.A. vibe.”

Brett McCall, fashion director of Nordstrom-owned Hautelook, said, “It was great to attend the shows at LA’s own ‘tents’ this week.  After attending New York Fashion Week in September it’s natural to want to compare the two, but that’s not all together fair to LA.  We should expect LA Fashion week to express the West Coast ‘vibe’ while also offering an opportunity for avant garde and red carpet designs to be showcased.   I feel like this week did that.  The LA shows are also a bit more relaxed.  At Lincoln Center, it’s all badges and barcode scanning and security but in LA, the atmosphere is more open and welcoming.  At the Katherine Kidd show, I sat next to a young passionate blogger and really appreciated the exchange I had with him.  While there are plenty of bloggers at the New York shows, I see the LA shows as more accessible, and the bloggers a humbler lot.

“Of course the real challenge is to get more retailers out to the shows,” he added. “I think in LA the goal should be to embrace our strengths (denim, urban, red carpet and RTW for a younger consumer) and produce a week of shows that re-imagine fashion week rather than try to imitate NYFW.  A Fashion Week with focus, quality, and a unique offering, as well as world class models would give retailers a reason to  come out.

“My advice to the designers and organizers is to remember that as retailers we look at the whole picture.  To improve the overall quality you have to pay close attention to the details; shoes, accessories, hair & makeup are all very important,” McCall said.

Rosemary Brantley, founding chair of the fashion program at Otis College of Art and Design, said, “So far, trying to mimic the New York model hasn’t taken off. It would be much cheaper for a sponsor to pay for small shows with really creative talents, and obviously cheaper for designers to show here. But it requires a jurying process.” Brantley scoffed at the taste level of organizers who put on events for profit rather than to support fledgling designers, but there appears to be an audience, perhaps just not the right audience.

On the opposite spectrum, indie organization Los Angeles Fashion Council, which limits shows to local designers, opted to stage shows during the day, catering to about 60 editors and bloggers, including those from the Los Angeles Times, the Doneger Group, Racked.com and trend forecasters WGSN. A buyer from the Nordstrom-owned Hautelook.com also attended. Designers paid what they could afford, ranging from $500 to $1,200, and The Grove subsidized the remaining costs.

“If we want emerging talent to stay here, we need to support them. But people should remove L.A. Fashion Week from global comparisons and let it find its footing. We’re not trying to be New York,” said LAFC founder Kelsi Smith.

Somewhere in the middle lies another event known as Concept Fashion Week. Produced by artist and designer Mike Vensel for the last seven years, it attracts edgier designers seeking an intimate runway or installation-style platform. Held in various galleries and photo studios (last week’s event took place at Quixote Studio in West Hollywood), the vibe is arty and the shows are fast and furious. In part dictated by a shoestring budget (it costs $10,000 total to showcase 14 lines in one day), Vensel kept the runway shows and presentations rotating relatively on time.

While optimism alone can’t improve fashion week, there could be more momentum behind it than there has been in some time. Vensel and Welch said they’re exploring ways to share a venue and lure more designers to show in L.A. Welch also said she’s expanding her buyer database and hopes to work with the California Market Center and other showrooms to get buyers to attend. The Grove is planning to extend its partnership with LAFC and is looking at other sites on its property that could house a runway tent and installations. “As long as there are designers who want a platform and people want to attend, we will keep going,” said Vensel. “It’s better to have options than to not show at all.”