The first complete collection of Louis Vuitton fine jewelry — awash in gold and diamonds — is destined to reach about 60 Vuitton boutiques this fall. 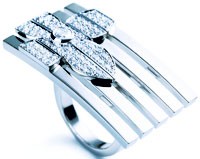 PARIS — Three years ago, Marc Jacobs decided a $20,000 charm bracelet — with a tiny, diamond-studded airplane and nine other symbols of glamorous travel dangling from it — would suit Louis Vuitton just fine.

Never mind the 150-year-old leathergoods giant had no heritage in fine jewelry.

“As with most things I do, I started on a whim,” Jacobs recalled in an interview. “I did feel it would be very believable for a brand like Vuitton to do fine jewelry, especially when you consider all the craftsmanship that goes into something like a trunk.”

Now, in the midst of this couture week, Jacobs’ whim reaches full realization as the luxury giant unveils its first complete collection of fine jewelry. The 110-piece collection — awash in gold, diamonds and references galore to Vuitton’s travel roots and famous monogram — is destined to reach about 60 Vuitton boutiques this fall.

“Jewelry gives a glamorous dimension to the brand,” declared Yves Carcelle, Vuitton’s chief executive officer. “And we think it can be a significant business. We see more and more cross-selling with our clients. When they enter the universe of Louis Vuitton, they’re happy to switch from one category to another.”

And just as the introduction of ready-to-wear and shoes in 1998 raised the fashion ante and attracted new customers to Vuitton, “I’m sure jewelry will attract new ones, too,” he noted.

Carcelle declined to give sales projections for the fine jewelry category, but said it could quickly match the volume of its two-year-old, more male-focused watch business. He added that about half of Vuitton’s global store network — some 160 locations — would be capable of selling the high-end category, priced from $600 for stud earrings and up to $240,000 for a spectacular laced choker with countless diamonds.

During an exclusive preview of the jewelry collection at Vuitton headquarters here last week, Jacobs acknowledged the creation process was initially jarring for someone more familiar with ready-to-wear, where clothes can be altered, fine-tuned or completely overhauled even hours before they hit the runway.

“When we work on clothing, things evolve: We add to it, we take away,” he explained. “With jewelry, it goes practically from sketch to finished product.”

What’s more, Jacobs allowed that he did not have many personal references or muses, since most of the women in his life are not the type to be dripping in heirloom jewels. Instead, he’s guided by the “aesthetic of women wearing what they like, a woman who is interested in fashion and indulges in luxury,” he said.

Indeed, Jacobs has a fluid sense of the high and low in fashion.

“It makes perfect sense to do accessories and jewelry, whether you make plastic bangles or a diamond bracelet, it’s the same thing to me. It’s just her stuff,” he explained.

Of course, Vuitton’s jewelry is made of the finest stuff: yellow and white 18-karat gold, diamonds and select semiprecious stones of unusual sizes and cuts. As a last-minute addition, Jacobs’ teams are also hunting for pearls with Vuitton-esque colors. A rare taupe one has already been located — and mounted in a ring with a diamond-studded band — but the hunt continues for chocolate brown and pistachio specimens.

There are several achievements of jewelry-making in the collection: the way smoked quartz, amethyst and citrine stones are cut into squares and pierced; the way diamonds are trimmed to perfectly pavé Japanese flower shapes, which derive from the monogram.

But Jacobs is not out to break barriers.

“It’s pretty classic right now in terms of experimentation. There’s no rubber and diamonds mixed,” the designer said. “The exercise was really to make things that are quite eye-catching.…I was trying to create jewelry that felt Vuitton-ish.”

To be sure, references to luggage surface repeatedly. The hardware associated with such items inspired clasps, closures and other elements of the jewelry. “Not that we tried to make a necklace look like a trunk,” Jacobs interjected. “Rather it has the presence of something that’s really well-assembled so it feels quite special and well-considered.”

The collection is broken down into three related themes, variations on the floral elements of the monogram, some with leather cords and lacing detail; the nail heads found on Vuitton trunks, and the shapes of luggage, evident in cube-shaped rings and earrings.

Jacobs said the fine jewelry category at Vuitton would be a work in progress, as the company gauges consumer reaction.

“The charm bracelet continues and we continue to produce the charms because people continued to like it and buy them,” he said. “What lasts is dictated by the customer.”

Since the initial charm bracelet, Vuitton has slowly been introducing more fine jewelry, from playful Takashi Murakami figures studded with colored gems to the diamond-pavéd bracelet with LV initials and emblems worn by Jennifer Lopez in the fall 2003 campaign.

As reported, the new collection of fine jewelry will get its own dedicated advertising campaign, to be photographed shortly by Ines van Lamsweerde and Vinoodh Matadin. It’s expected to break in December magazines.

Retail support will also be extensive. Vuitton worked with architect Peter Marino to develop in-store environments in select locations to display exceptional jewelry items to best effect and help clients in a discreet and service-intensive environment. The Manhattan flagship at Fifth Avenue and 57th Street, for example, anticipated the launch with an expansive space for watches and jewelry.

Carcelle noted that no launches into other product categories are planned for the brand. “We still have a lot to do with ready-to-wear and shoes, as well as watches and jewelry,” he said. At present, rtw is found in about 60 Vuitton locations, while footwear is already in more than 200 doors.