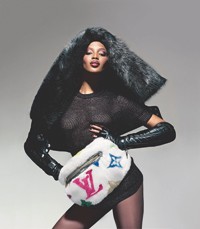 PARIS — With Technicolor eye shadow and plenty of in-your-face model attitude, Marc Jacobs has injected a strong dose of ferocious fashion into the fall ads for Louis Vuitton.

“We went for a harder, tougher look,” the designer said about the ads, which have Naomi Campbell, Kate Moss and Daria Werbowy channeling the sort of women who might have inhabited beauty ads — or album covers — in the power Eighties. “I think it looks very contemporary.”

Photographed by Vuitton regulars Mert Alas and Marcus Piggott, the campaign is slated to break in August magazines, and also features hip-hop and rap star Pharrell Williams, decked out in a fur vest and gold shades and lounging amidst monogrammed trunks.

Jacobs characterized the streetwise ads as a departure for Vuitton and said he wanted to stand out from the “elevated, natural glamour” rampant in fashion campaigns lately.

“We all felt really good about working with great girls and doing something different,” he said in an interview Monday. “We made them harder fashion images, really chic, almost photographic compositions.”

The ads were shot in a New York photo studio in March, right around the time Campbell made tabloid headlines in an alleged assault on her assistant.

Jacobs admitted the circumstances were unusual, but the outcome was not. “I love the one of Naomi. I think it’s so fantastic, and she looks amazing,” he said.

One of the most striking images features Werbowy with a shoe askew on her head. “We were just playing around,” Jacobs related. “At first, we had it on her foot, but the shoe looks like such a strong object visually because its arch is missing, so we tried it on her head.”

As for Williams, Jacobs said he chose the musical star because “he’s an incredibly good-looking guy … and I felt that he could stand up to the strength of the girls.”

Accessories naturally get a starring role, including oversize ski hoods and pearl necklaces, leopard-print stoles by the late Stephen Sprouse, sunglasses and colorful mink handbags. “It’s not that we have to ‘get in the bag,’ ” Jacobs said. “I really loved the accessories this season.” Plus, he noted, “it’s first and foremost a bag and luggage company.”

This story first appeared in the June 13, 2006 issue of WWD. Subscribe Today.

Vuitton declined to reveal its fall ad budget, but analysts have estimated the brand spends more than $250 million annually on advertising.