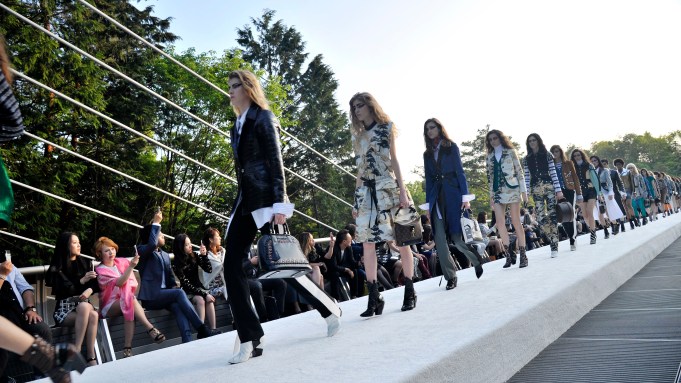 “This event really pushes the limits, I think. You have taken a public road and turned it into a party — this has never been done before,” said Keiji Yamada, the governor of Kyoto Prefecture.

“I’ve been to Japan before and I’ve been to Kyoto before, but I’ve never been on this street, somehow,” said Jennifer Connelly as she soaked up the atmosphere. “It’s really remarkable — it’s so beautiful. It’s very special. I’ve never seen anything like it.”

In an unprecedented move, Vuitton took over 15 of the street’s historic restaurants to host its guests. The evening before, it had booked three of the city’s temples, including the prestigious Sennyū-ji temple, which Emperor Akihito often visits and which had never before hosted a private event.

With such build-up, there was a risk that artistic director Nicolas Ghesquière’s clothes would be overshadowed by the production. He more than rose to the occasion, with a lineup that paid tribute to Japan’s rich traditions, while further mining the tough-girl aesthetic he has established since joining the brand in 2013.

The collection was shown at the Miho Museum, a stunning mountaintop venue designed by I.M. Pei, the architect behind the Louvre pyramid in Paris, where Ghesquière unveiled his fall collection last March.

A convoy of cars made the one-hour journey from Kyoto, snaking up a long and winding road through verdant hills to the destination, which Pei conceived as his version of Shangri-La. Indeed, approaching the museum on foot through a long curving tunnel and over a suspended bridge felt like entering a different dimension.

Models were ferried onto the white-carpeted runway by a conveyor belt running through the tunnel. Even so, they were probably grateful to be wearing cropped cowboy boots for their long journey across the bridge.

Japanese actress Rila Fukushima, a longtime friend of the brand best known for her role in “The Wolverine,” opened the show in a belted jacket made from a patchwork of furs, including two leopard-print shoulder patches that popped against an oversized striped cotton shirt.

“I saw this movie a few years ago called ‘Stray Cat Rock,’ which is about women bikers in the Seventies in Tokyo, and the first time I came here, they were still around with those bikes and I remember being completely surprised by those characters, so they were the women at the beginning of the show,” said Ghesquière.

“Every cruise collection is a discovery and it’s a game of integrating the culture of the country we are visiting with a point of view that is very French and Parisian,” he said.

“I’ve been coming to Japan for more than 20 years for personal and for professional reasons and like everyone, I was always amazed by the contrast between how they preserve the heritage and the history and they celebrate it, and at the same time how much the country is looking forward — it’s very technological and modern.”

His approach similarly straddled the past and the future. Sheer evening dresses, gleaming with gold sequins derived from the rich costumes of Noh theater, were casually slung over pants.

“I wanted to have a joyful point of view, too, of Japan, and he is it. He did these incredible costumes for Bowie as we know, but also was the first Japanese designer to show in Paris, so I thought it was really interesting to celebrate that and to ask him to design a few things for the show,” Ghesquière said.

Yamamoto, wearing a red suit, said he was introduced to the designer by his daughter Mirai, an actress, and retired footballer Hidetoshi Nakata — who were both also in attendance. “I love his passion and his new creations so I was very happy to support him,” said Yamamoto, who is planning a show of his own in Tokyo on June 10.

His influence could also be felt in the way Ghesquière played with volumes, especially with his oversized tailored jackets with exaggerated curved sleeves (Mica Argañaraz looked terrific in a black version paired with tiny shorts.)

Standing on a terrace and gesturing toward the sun setting behind forested hills, the designer admitted to a sense of heightened emotion. “It was actually a big challenge to try to reflect my love for the country and the eclecticism of it. That’s why it’s the biggest show I’ve done for Vuitton in terms of outfits,” he noted.

With Japan, Ghesquière had clearly found a theme that resonated on a profound level, and his audience felt it.

“We were not disappointed,” said Huppert, who was preparing to head to the Cannes Film Festival. “It’s truly extraordinary. Doing the show here adds to the surprise of discovering the clothes — it’s a whole. But even if you saw them in another context, you would find them just as wonderful.”

Harrier was also among the celebrities mingling at the post-show cocktail inside the steel-and-glass museum, commissioned by textile heiress Mihoko Koyama to house her private collection of Asian and Western antiques.

“It’s really one of the most beautiful buildings I’ve ever been in and I think it’s so incredible of Nicolas and Vuitton to come here after doing it at the Louvre last season. It’s just really overwhelmingly gorgeous,” said the American actress, who plays love interest Liz Allan in the upcoming “Spider-Man: Homecoming.”

“Honestly, I’m so happy about ‘Spiderman’ and just really excited to see it as much as everyone else. I haven’t seen it yet, so I’m totally a fan with all those people. It’s a little exciting and overwhelming and a lot rolled into one,” she said.

Sunday’s show marked the first time Vuitton has brought a cruise collection to Japan, reflecting both a thriving local market and Japan’s importance as a magnet for customers from neighboring countries, said Michael Burke, chairman and chief executive officer of Louis Vuitton.

“We have a number of clients that are not going to travel 12 hours to see a cruise show, so it is a necessity to bring cruise to them. First and foremost, this is a client-centric event,” he said.

“One reason why we did Japan is because everyone in Asia wants to travel to Japan. It’s different from years ago when nobody traveled to Japan. It was insular. Today, everybody — the Chinese, the Taiwanese, Indonesians — they all want to come and experience Japan, because Japan is so distinctive,” the executive added.

Vuitton has maintained strong ties with Japan since the end of the 19th century, citing the mon, or family crest, emblems that inspired its Monogram canvas; its first store in Tokyo in 1978, and collaborations with Japanese artists and designers such as Takashi Murakami, Yayoi Kusama, Rei Kawakubo and Hiroshi Fujiwara.

However, staging the show in a country renowned for its perfectionism turned out to be even more challenging than bringing it to Rio de Janeiro, which has a reputation for unpredictability.

“To get to perfection, it’s painful. So pulling off this type of event in Japan, paradoxically, is the most difficult,” Burke said. “Brazil is a Latin country where last-minute changes are a given, where agility is a national sport. Japan is the antithesis of Brazil. It’s all about perfection and repetition and making sure there are no surprises.”

In addition, the Miho Museum has never before hosted a fashion show. “It’s a one-off, it’s bespoke. It’s not going to be repeated,” said Burke. “Local authorities, our teams, the clients — everybody is discovering something for the first and last time.”

The location is in keeping with the brand’s tradition of choosing venues designed by leading architects, including John Lautner’s Bob and Dolores Hope Estate in Palm Springs in 2015 and the Niterói Contemporary Art Museum by celebrated Brazilian architect Oscar Niemeyer last year.

SEE ALSO: All The Looks From The Louis Vuitton Cruise 2018 Show in Kyoto, Japan >>

“Kyoto brings permanence, craft, authenticity, history, provenance — these are all very important elements of luxury — and modernity needs to be brought through architecture,” Burke explained.

“So the link is John Lautner, Oscar Niemeyer, I.M. Pei: We’re writing a story, and these are chapters in a book we’re writing, so these various connecting points [are] what’s creating a distinctive point of view for Vuitton,” he added.

Burke said Vuitton was outperforming other luxury brands in Japan, a consequence of its permanent presence in the country, where it has around 50 stores, and its focus on local customers — regardless of the ups and downs of tourism flows.

“We’ve been here for a long time and we will be here for a long time, come hell or high water, regardless of whether the times are good or bad. After the bursting of the bubble, we stuck to our guns, we kept on investing. We open or reopen and renovate and relocate approximately eight stores a year in Japan,” he explained.

In addition, Vuitton is keeping close tabs on the major city-center renewal projects centered around railway and subway stations, now happening in districts including Shibuya and Ikebukuro in Tokyo and Umeda in Osaka.

“These are major redevelopments and we typically cooperate and coordinate with the landlords to design the retail aspect of it,” he said. “It’s a very dynamic market, so we’ll continue investing in all these redevelopments.”

The commitment appears to be paying off. Items from Vuitton’s second collaboration with Fujiwara’s Fragment label flew off shelves at its Tokyo pop-up store last month. “The line was one kilometer long,” said Burke. “We did $2 million the first day. We ran out of products after the first week.”

Daisaku Kadokawa, the mayor of Kyoto, noted that next year will mark the 60th anniversary of the city twinning with Paris. Oh, and Louis Vuitton is welcome back any time.

Louis Vuitton Cruise 2018 Show in Kyoto, Japan: All The Bags You Need To See

All The Looks From The Louis Vuitton Cruise 2018 Show in Kyoto, Japan