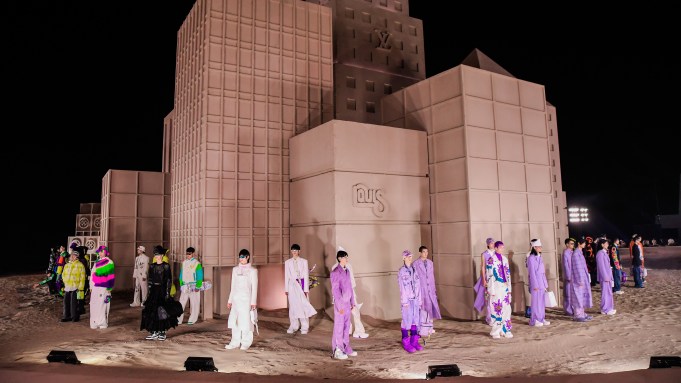 The spectacle, livestreamed on eight platforms, including Weibo, Douyin, Kuaishou and for the first time on Dewu, China’s own StockX, attracted more than 278 million viewers online.

Louis Vuitton became the first luxury brand to host a fashion show at Aranya. Valentino will follow suit, taking over Aranya with art installations and a pop-up store to celebrate its Pink PP collection next week.

With strict COVID-19-related screening rules and frequent mass-testing requirements, arriving at Aranya was a feat in itself. The show was closely inspected by local authorities up until minutes before it started. But as Chinese celebrities, such as newly minted brand ambassador Yilong Zhu, brand ambassadors Jun Gong and Chen Jin, actor Kun Chen, and TNT‘s Yaowen Liu got seated in the front row, the show began on time.

The Aranya spin-off portrayed a more poetic version of the original show, suggesting an idyllic lifestyle within the community.

Before the show, a prelude video called “Mirage” made its debut to the livestreaming audience.

Produced by Chinese filmmaker Jia Zhangke and directed by up-and-coming auteur Wei Shujun, “Mirage” portrayed a boy’s travels from the edge of the Gobi Desert to Aranya’s 320-meter runway. The Beijing-based rock band Sleeping Dogs played a live score that launched the show.

“At sunset, by the sea, walking through the sand castle, models looked like a bunch of spiritual nomads,” Jia said after the show.

“It’s hard to tell if they are returning or going somewhere. As the last ray of sunlight disappears, the light of mankind lights up on top of the castle.”

For Chinese influencer Linxuan Gong, the show amplified the link between the brand’s late creative director Virgil Abloh and Aranya.

“Aranya is like Truman’s world. It’s a man-made world, just like Duchamp’s ready-made art, which is an extreme artistic expression of daily life,” Gong said. “Aranya is really that big of a playground.”

“We were in another world,” said Stephen Khou, skater and cofounder of streetwear brand Avenue&Son. “It was just perfect, great collection, bangin’ location, cool people, and dope sound, then we started partying super early, it felt like 4 a.m. by 10.”

“It feels uplifting, to be able to successfully host a fashion show at times like these,” added Zhuge Sujia, deputy editor in chief of Elle China and editor in chief and publisher of SuperElle. “But seeing the fun and quirky details of the clothes up close, you are reminded of the joyful moments in life,” she said.

On top of the fashion shows, guests could be immersed in Vuitton’s playground-themed world throughout the Aranya community.