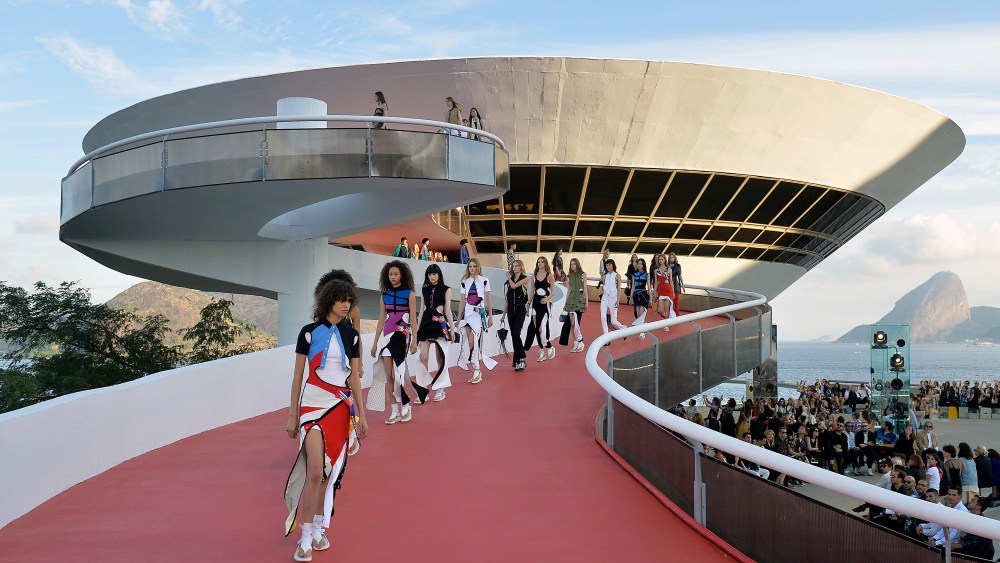 Staged at the Contemporary Art Museum (MAC), a white modernist structure that looks like a flying saucer perched on a cliff above the waters of Rio’s Guanabara Bay, the show was framed by the city’s breathtaking, deep green mountainous landscape. The setting sun was reflected on Sugarloaf mountain, majestically guarding the entrance of the bay from the Atlantic Ocean. Below the Christ the Redeemer statue, the city seemed to spring out of the green forest.

The soft splashing sound of waves could be heard as about 500 guests — including customers and editors — took their seats in a row of colorful crates made of wood, plastic and metal, in a visual reminder of Rio’s many favelas and traditional neighborhoods. As the models emerged from the top of the circular structure onto a bright red ramp that snaked down to a plaza by the water’s edge, about 150 fans outside the museum’s gates screamed. The balconies of buildings overlooking the museum turned into VIP boxes for the show, and were crammed with residents who clapped with delight at the sight of the girls.

“The idea for this collection was a fusion of this tropical, natural quality that is all around us in Rio and the urban element,” said Nicolas Ghesquière, Louis Vuitton’s artistic director of women’s collections. “The scenery can be very dramatic but there is also softness.”

Softer lines were exactly what Oscar Niemeyer, the famed Brazilian designer who created the MAC, searched for in his work. His trademark was transforming the stark and angular lines that are so common in architecture into billowing, flowing structures infused with exotic and tropical elements.

In a clear tribute to Niemeyer’s creations, which include Brazil’s Congress with its two white semi-spheres, Ghesquière brought white maxidresses with asymmetric hems that resembled arches, and added a splash of color and oversize zippers to the tops. Bright blues and oranges, yellow and black with Formula One-inspired details and peekaboo cutouts gave the dresses a casual look that could fit perfectly into Rio’s beach-town culture. And the ruffled skirts just had to be part of the collection inspired by this city, the designer said. A silver sequined minidress with ruffles on the top and bottom and a bit of flesh showing through looked like a costume straight out of Rio’s wild Carnival parade. Ditto for the colorful, sequined skirts resembling beach towels.

In a nod to the city’s strong musical culture, Ghesquière created a petite malle shaped like a boom box, much like those found in “Baile Funk” dance parties that animate Rio’s poor suburbs and favelas. And, of course, there was soccer: minidresses embroidered with soccer players scoring beautiful goals.

Louis Vuitton flew in several of its celebrity friends for the show, including Alicia Vikander, Jaden Smith, Zendaya and Catherine Deneuve, as well as Brazilian models Alessandra Ambrosio and Isabeli Fontana. Deneuve was enjoying the sight. “I loved it. It was like watching girls from the future getting out of a flying saucer. And the view is just incredible,” she said.

The house picked Rio for its exotic mystique, said chief executive officer Michael Burke. “Rio is iconic. Everybody knows about Rio, dreams about Rio. But very few people actually come here.” The house treated guests to early-morning private visits to the Christ statue, helicopter rides over the city and stand-up paddle classes. He said foreign clients were happy to be in the city, and mentions of the show on social media were going through the roof. “Rio has star power in that sense, too.”

Sabrina Sato, a Brazilian TV show host with 7.7 million followers on Instagram, was among the first to post a comment after the show: “It was gorgeous. And I loved my look,” she said of her black, gray and green soft leather jacket.

After the show, Sato joined Ambrosio, Smith, Vikander and other guests at a party at Parque Lage, a 19th-century mansion at the foot of the Corcovado mountain. Christ the Redeemer towered above the dance floor that covered the pool in the mansion’s atrium as samba dancers and drummers from the Grande Rio samba school mesmerized the crowd. DJs took turns mixing Brazilian dance music with favela funk rhythms. Vikander got into the groove of the electronic Brazilian beats, waving her arms in the air as her slick ponytail flicked behind her.

Luxury houses are increasingly betting on resort shows in exotic locations precisely because they resonate beyond those who can attend them. Burke noted that Ghesquière’s resort 2016 collection in Palm Springs, Calif., at another midcentury architectural marvel — the John Lautner mansion belonging to the Bob and Dolores Hope estate — garnered a strong following on social media, earning more online impressions than the brand’s show during Paris Fashion Week. Vuitton’s Rio event comes almost a month after Chanel unveiled its “Coco Cuba” collection in Havana.

Brazilian clients from several states were in attendance since Vuitton is the top luxury brand in the country. Brazilians are among the top-10 largest Vuitton buyers, and sales are still healthy despite the country’s crippling recession and political turmoil that have severely hurt consumer confidence. An outbreak of the Zika virus, which has been linked to hundreds of cases of babies born with brain damage, and delays in Olympics-related infrastructure projects have added to the gloom.

Still, Burke said business is good. “I’d say nice double-digits,” Burke said before the show. But he admitted that Brazilian consumers who were so avid to shop for luxury goods in the boom years are retrenching because of the uncertainty. “We are used to ups and downs and we know that Brazil can be a difficult place to do business. But we don’t worry about that; we are here for the long run.”

The house arrived in Brazil in 1989 and has two stores in Rio, two in São Paulo, one in the capital Brasilia and one in the southern city of Curitiba. It also sells products on its online store, where business picked up in the last few years and now makes an important contribution to local sales, said Burke.

And does the brand have an appetite for new stores? Yes, but there is no need to rush, according to Burke. Brazil could easily be a “20-store country” but Vuitton is working on expanding relationships with clients who don’t necessarily need to go to a store to shop.