A rendering of the "Louis Vuitton X" exhibition in Los Angeles featuring a portrait by Alex Katz.

PARIS — Forget about LAX. Louis Vuitton hopes to create a hot destination in Los Angeles with LVX — shorthand for “Louis Vuitton X,” an exhibition of its most memorable collaborations scheduled to coincide with the launch of a new set of handbags designed by six contemporary artists.

Having worked with world-renowned artists including Takashi Murakami, Richard Prince and Jeff Koons, the French fashion house has tapped the new group — Sam Falls, Urs Fischer, Nicholas Hlobo, Alex Israel, Tschabalala Self and Jonas Wood — to put their own spin on its ladylike Capucines bag.

The resulting ArtyCapucines collection will go on sale June 25, with each design available in a limited and numbered edition of 300, priced at 6,500 euros.

Adding extra cachet to the collaboration, the bags will be displayed as part of the “Louis Vuitton X” exhibition running from June 27 to Sept. 15 at 468 North Rodeo Drive, the massive 22,250-square-foot, multistory building at the corner of Santa Monica Boulevard that was previously occupied by Brooks Brothers.

It’s one of a series of adjoining properties snapped up last year by Bernard Arnault, chairman and chief executive officer of LVMH Moët Hennessy Louis Vuitton, triggering speculation that the luxury conglomerate plans to open a Cheval Blanc hotel in Los Angeles. LVMH has declined so far to comment on the project.

In the meantime, Louis Vuitton — the star brand in the LVMH crown — plans to take advantage of the space to shine a spotlight on the collaborative process, which it launched in its current form in the Seventies, and turned into an industry game changer under the tenure of former artistic director Marc Jacobs.

“We’re doing something that’s time-sensitive, venue-specific and specific to the two creative approaches: Louis Vuitton on one side, and the artists on the other side,” Michael Burke, chairman and ceo of Louis Vuitton, told WWD. “It was long overdue. The modern collaborations go back 40 years.” 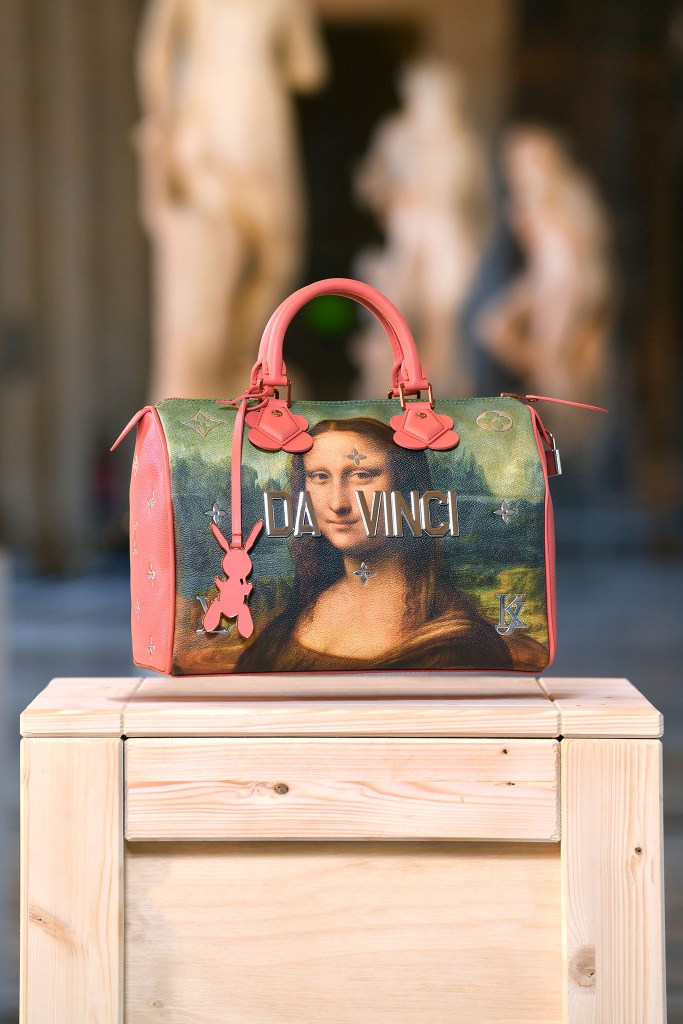 Via immersive installations split between 10 rooms, the luxury house will display more than 180 items from its archives, ranging from custom-made trunks dating back to the early 20th century to Monogram handbags reworked by artists and designers including Cindy Sherman, Frank Gehry and Karl Lagerfeld.

“Louis Vuitton was the first to really delve into it in a modern way and a transparent way. There were always collaborations, but those collaborations were happening behind the scenes and they were never credited,” Burke said.

“That’s all changed since the Seventies, when all of a sudden it became OK, especially for artists, to have a close relationship with this so-called unserious business of fashion,” he added.

Burke described the show as a cross between the “Volez, Voguez, Voyagez” exhibit retracing the history of the 165-year-old house — which has traveled from Paris to Tokyo, Seoul, New York City and Shanghai — and the house’s Series 2 show, which explored the origins of creative director Nicolas Ghesquière’s spring 2015 collection.

“You had ‘Series’ that was very techy, avant-garde, and we had ‘VVV’ that was mostly steeped in the past, and ‘LVX’ is the cursor between the two,” he said.

Among the star items is a specially commissioned portrait of Louis Vuitton by Alex Katz, and rarely seen items, including a 1990 silk scarf designed with Italian architect Gae Aulenti, and original Twenties window display drawings by Gaston-Louis Vuitton, the grandson of the founder.

On the first and last day of the exhibition only, visitors will be able to catch a glimpse of the 2018 FIFA World Cup Winners’ Trophy and its titanium-covered case, designed and handmade at Vuitton’s special orders workshop at the historic Louis Vuitton grounds near Paris.

Also on display will be scarf designs by the likes of Sol LeWitt, James Rosenquist and Andrée Putman; clothing and accessories created with artists such as Stephen Sprouse, Jake and Dinos Chapman and Yayoi Kusama, and a special room underscoring the brand’s links with Hollywood.

In its biggest display of red-carpet looks to date, the label will showcase 31 outfits designed by Ghesquière and worn by brand ambassadors including Alicia Vikander, Michelle Williams and Emma Stone. 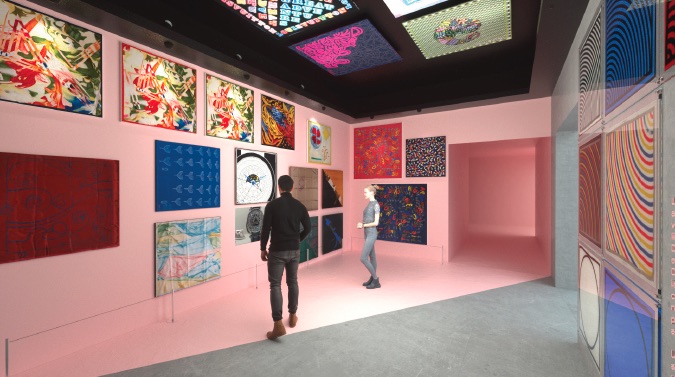 A rendering of the “Louis Vuitton X” exhibition in Los Angeles.  Courtesy

Burke credited Jacobs with turbocharging collaborations at Vuitton, starting in 2001, when he enlisted Sprouse to spray-paint graffiti on the brand’s famous monogram handbags.

“One of the benefits of bringing in a fashion designer to Louis Vuitton in 1997 was precisely opening up Louis Vuitton to other worlds, and Marc did it with more genius and brio than anybody else has ever done in the luxury world. I was there at that time and I can tell you, it was highly controversial internally and we had lengthy discussions about it,” he recalled.

In recent years, Delphine Arnault, executive vice president in charge of supervising all of Vuitton’s product-related activities, has been instrumental in orchestrating its projects with artists, including the line designed by Koons, launched in 2017, and the ArtyCapucines project.

Though there is not a single uniting factor between the six artists, three of them — Wood, Israel and Fischer — are represented by gallerist Larry Gagosian.

Israel, who has also collaborated with the LVMH-owned luggage-maker Rimowa, is known for his West Coast aesthetic and last year launched his own clothing brand, Infrathin. His bag design was inspired by his “Waves” paintings and comes with two detachable Plexiglas surfboard fins, one attached to a mirror, the other to a comb.

Wood, who also lives and works in Los Angeles, created a pattern based on his “Landscape Pot” paintings that was digitally printed and then embroidered with 230,000 stitches. Falls, another L.A.-based artist, created his print using leaves and flowers picked in the gardens of the Vuitton family home.

Hlobo, a South African artist known for his organic sculptures, and New York-born Self, whose bold paintings center on black female identity, both created elaborate embroideries inspired by Vuitton’s monogram motif. The patchwork on Self’s bag features 19 different types of leather, some upcycled from the Vuitton atelier. 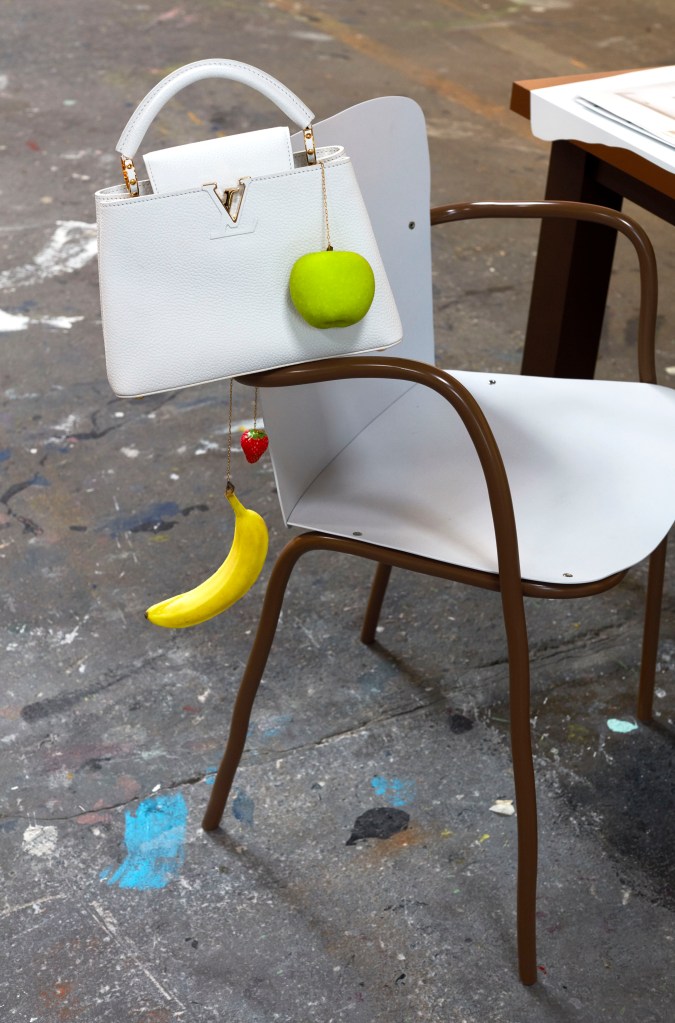 Fischer, in typically subversive mode, opted for white leather Capucines bag that he described as a “blank canvas” for his hyper-realistic hand-painted silicone charms: a banana, strawberry, apple, mushroom, egg and carrot. If that doesn’t sound like a surefire bestseller, Burke is not especially concerned.

“This is not a commercial activity. We do collaborations because we like the association of the designers and the artists. We do it because it creates unexpected objects. We do it on our side because it gives a great impulse to our studios — it typically forces them to work with materials that they’re not aware of,” Burke noted.

“For the artists, it’s the same thing. They are confronted with a set of constraints that they typically don’t have to deal with,” he added. “Both sides being forced to reevaluate the creative process: that’s interesting. That’s why we do it.”

That signals a change in strategy for the house, which has previously banked on its blockbuster collaborations to help drive sales. The new approach reflects Vuitton’s growing attention to diversity, as evidenced by the appointment last year of Virgil Abloh as creative director of men’s wear.

While Burke did not explicitly draw that link, he suggested smaller, targeted collaborations were the next big trend.

“It’s, ‘What can we do that keeps pushing the envelope of our creativity?’ That means engaging with other creative types, but you don’t need to make it a worldwide event. I think the associations have to be more bespoke,” he explained.

“What’s much more important is that you find bridges between two artistic trends. It has to be made to order, instead of general in-your-face hoopla.”