Anything that smacks of luxury is key for fall-holiday and a look at the March edition of Lingerie Americas. 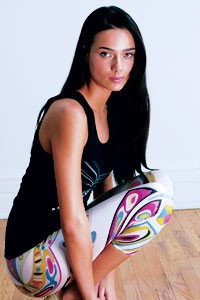 NEW YORK — An insatiable appetite for more fashion and specialty items could make the lingerie market sizzle for fall-holiday 2005.

Valentine’s Day proved to be a stronger-than-usual selling period for lingerie, particularly luxe boudoir fare such as silk and chiffon peignoirs, robes and chemises, as well as novelty gifts like embellished thongs and boy-cut shorts with coordinating camis.

Whether it was whimsical, sexy or sleek and classic, lingerie averaged sales increases in excess of 10 percent the first half of February compared with a year ago, several vendors said. And innerwear executives generally said they are eager to capitalize on the momentum with a plethora of new product.

Top ideas include expanding new classifications such as buttery-soft microfiber blends like Modal, Tactel and Lycra, adding more fashion colors and embellishment options for key items like baby dolls and building niche areas, including bridal and special occasion. Some up-and-coming designers like Daniella Simon are even branching out into unknown waters with unorthodox mixes of contemporary microfibers and vintage trims, while Cassandra Kelley, co-founder of 2Belles, a young contemporary underwear label, is using couture satin ribbons and bows as a signature. Meantime, Wolford is offering Pucci-inspired leggings.

Upscale goods in lingerie overall also have been a strong category, and anything that smacks of luxury — elaborate French or Italian lace, dressmaker touches such as cording, pleating, fagoting and ruching, or high-quality cottons, silks and cashmere and double-face fabrics that are softly brushed — is in big demand.

Sizing up the mood of the market, Donna Giambrone Ingram, director of merchandising and design for the Stan Herman collection of robes and at-homewear as well as sleepwear by Jockey and Nine & Co. at Carole Hochman Designs Inc., said: “Retailers definitely want more luxury goods, and they are looking for that next step. They realize special is better. It’s not just private label anymore. Our luxe detail groups by Stan Herman got the ‘wow’ with the first collection in January.”

Ingram said a palette of soft, dusty colors including sage, lilac, ice blue and pink are an important element of the Stan Herman collection for holiday because “it’s not only for gift-giving.

“We wanted to give it a life after Christmas,” Ingram said. She added that several new microfiber fabrics were expected to be well received: a waffle-pattern “souffle” terry, a double-faced “cloud” fleece with satin-quilted trim and a sheared faux mink that was a best-booking item for fall. Special detailing includes embroidered eyelet and cotton sateen jacquard trim.

Michelle Clark, vice president of merchandising at Movie Star Inc., noted, “We’re expecting to see big increases at this market based on strong selling at retail. We’ve taken a boutique approach to traditional sleepwear with bustiers, bras and baby dolls that have a boudoir appeal. March will represent the best of what we’ve been doing with the Cinema Etoile line — more sensual body-hugging silhouettes.”

“Retailers had a a lot of success with gifts-with-purchases like thongs during Valentine’s Day, and they are realizing they really need to differentiate themselves,’’ said Kathryn Thomas, account executive for JD Fine, maker of Softwear and Lemon Tart sleepwear. “They need to step it up a bit. There’s a lot of openness to new ideas, and come spring we will be featuring a lot more new knits.”

Thomas said one idea in particular clicked for Valentine’s Day — sleepwear with amusing his and her tattoos. Other ideas for holiday will include a program of coordinating slipper socks. Prices have not been set.

She noted that a number of styles by Softwear for holiday will have a whimsical approach with items like leopard-print pajamas of brushed interlock that has a glitter effect with red ribbon trim, and novelty pajama pants with T-shirts with sayings like “Where’s My Present?” Lemon Tart will focus on young contemporary silhouettes such as chemises and cropped long-sleeved tops and drawstring pants of Modal, woven velvets and Tencel.

“We are working with beautiful Italian laces,’’ said Gale Epstein, designer and co-owner of Hanky Panky, a daywear, underwear and sleepwear specialist. “One notably special set is a ballerina-inspired lace and crinkle chiffon chemise and thong in ballet slipper pink and black. Our very popular lightweight thermal sleepwear is back with a vengeance, interpreted in contemporary silhouettes and fashion colors with contrasting one-by-one rib-pattern trim.” Color combinations are white with pink, blue with teal and black with sage.

Epstein added one idea that is getting strong reaction is “adapting our best-selling styles for pregnant moms.

She further noted, “Our [fall] orders are up from last year by 25 to 40 percent. Retailers are all looking for daywear. And they’re even trying to get people who don’t do daywear to do daywear.”

Daniella Simon, designer of Daniella Simon underwear, daywear and sleepwear, observed, “I’m very optimistic about this market. I started out with bridal panties in April 2003 with rhinestone sayings like ‘I Do’ and ‘Just Married.’ Now, I’m getting strong reaction to vintage-looking sleepwear.”

The Flora Nikrooz collection of sleepwear for holiday selling at Age Group will feature “lots of shine,” said designer Flora Nikrooz. “I’ll be showing lots of Chantilly lace with an incredible amount of shiny, embroidered trims, as well as the charmeuse and chiffon I always use. But one new idea is really taking off — jerseys that have a silk-like hand and a very sexy effect. We tested it for the past two seasons in small offerings and it’s received great reaction,” Nikrooz said.