NEW YORK — Luca Luca, the Manhattan-based designer collection with an Italian soul, is raising its profile by widening its retail presence. While there’s been sufficient media hype, with celebrity followings at fashion shows and product... 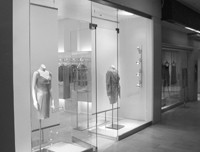 NEW YORK — Luca Luca, the Manhattan-based designer collection with an Italian soul, is raising its profile by widening its retail presence. While there’s been sufficient media hype, with celebrity followings at fashion shows and product placement on stars like Halle Berry, it’s time to build up the brand with bricks and mortar.

Luca Luca opened a store in the Houston Galleria last month. Another is set to open in The Village at Merrick Park in Coral Cables, Fla., this Friday, and a lease has been signed for The Forum Shops at Caesars Palace in Las Vegas. The Vegas store is seen opening in October in a new wing under construction, near where Kate Spade, Harry Winston and Carolina Herrera are planning shops.

Additionally, company officials said they want to open Luca Luca in South Coast Plaza in Costa Mesa, Calif., near Los Angeles, and subsequently on Fifth Avenue and possibly in Europe, though in these instances, no plans are set. Currently, Luca Luca operates seven stores: two on Madison Avenue; in Palm Beach and Bal Harbour, Fla.; Houston; Chicago, and Highland Park, Dallas. The Bal Harbour store is expected to be renovated by February.

“Personally, I don’t have a desire to have a humongous company,” said Luca Orlandi, owner and designer of Luca Luca and the son of a yarn spinner from Milan. “We are very happy with the way we are, but now we are really entering the most fun phase of growth, which will enable us to do more things.”

Building volume, aside from making more money, will open doors to certain suppliers that have been reluctant to do business with Luca Luca because of its small size, Orlandi explained. The firm wants to broaden certain categories, such as accessories, which represent only 6 percent of total volume and were launched about two years ago.

“When you are a small company and ask for special fabrics or special heels, any little investment, anything special, really doesn’t make sense [to the supplier] unless it’s in quantities of thousands,” Orlandi said. At one time, out of every 10 requests for fabrics, Luca Luca would get eight rejections, he noted. In the last few seasons, however, “We get more yeses, and less noes.”

He does get a break on prices from his aunt who has a successful fabric house in Milan called Gambini Tessuti, Orlandi acknowledged. He buys double-faced wools, evening brocades and silk prints from her, to help underprice other designers — he says Luca Luca is priced about 30 percent below the competition — though the collection still falls in a high-price zone. Wool blazers with silk lining and handcrafted detailing retail for around $1,000. Evening gowns in eight-ply silk with a bias cut are priced around $1,500. Structured suits in wool, linen or silk are priced at $1,600. Knitwear ranges from $200 to $450, and shoes with jewels such as Swarovski crystal beads, are priced from $390 to $450. The collection has about 120 styles.

Growth has been primarily through comp-store gains, which rose 30 percent last year, according to Yildiz Yuksek Blackstone, president, who originally joined the firm as manager of the Luca Luca store on Madison Avenue and 78th Street. The other Madison Avenue unit, on 62nd Street, is considered the flagship. It’s in the same building as the headquarters, showroom and Orlandi’s atelier.

All stores range between 1,000 and 1,700 square feet and are outfitted with beige ultrasuede benches with brushed aluminum accents, and champagne-hued carpeting that create a warm and clean feeling, reflecting the merchandise. Luca Luca has a limited wholesale distribution to Neiman Marcus and a few specialty stores, including Gito in Milburn and Englewood, N.J., and Razooks, in Greenwich, Conn.

Blackstone said the company is profitable, new stores will be financed internally, rather than borrowing, and stores turn a profit in two to three years. Volume is between $10 million and $20 million.

Many people think Luca Luca is based in Italy, largely because the fabrics, the production and the owner are all Italian. Then there’s that quirky, though charming, corporate moniker. When he founded the company 14 years ago, Orlandi wanted the name to be fun, so he decided it would be best to repeat his first name, rather than use his full name. He moved from Italy to New York in 1987, and worked for the former He-Ro Group, where he helped produce bridge collections for Oscar de la Renta and Bill Blass.

Asked what makes the collection appear distinctive from others, Orlandi observed, “It’s elegantly clean-cut, but not minimalist. I use lots of pleats, details and beading and it’s sexy, without being messy.”