LOS ANGELES — Lucky Brand Dungarees is thinking like an artist.

The Vernon, Calif.-based denim-driven label has quietly rolled out its new Limited Edition collection, high-end garments, each numbered inside. And in classic marketing... 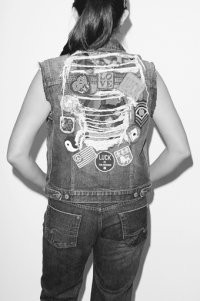 LOS ANGELES — Lucky Brand Dungarees is thinking like an artist.

The Vernon, Calif.-based denim-driven label has quietly rolled out its new Limited Edition collection, high-end garments, each numbered inside. And in classic marketing strategy, it’s already creating buzz with its scarcity.

The 12-piece collection for women and men pushes Lucky’s fashion envelope with better, imported fabrics like pure indigo and black ring-spun denim, weathered finishes and edgier styling. For fall, there is a military-Girl Scout hybrid miniskirt cut from a shirt and embellished with Vietnam era-style patches including dice, and a patch-covered tattered vest with a peace sign revealed under exposed yarn. Heavily garnished denim is also core to the line, including low-rise jeans with exposed selvage on pocket hems and a resin-baked finish.

Lucky executives consider the line, which began shipping Jan. 30 to less than two-dozen doors, as a roots-inspired collection.

“We wanted to speak to the customer at a different level and thought the timing was right with the sneaker industry reissuing special-edition runs of their own,” said Liz Munoz, Lucky’s senior vice president of merchandising.

Washes that can cost four times the regular applications help ramp up the sales tab. The line retails for $120 to $220, about double typical Lucky prices, and is manufactured in limited runs of about 150 pieces per style.

“We wanted to do something that we couldn’t do in the original Lucky line because of prohibitive costs,” added Lucky denim design director Mike Hodis.

The venture, though, isn’t one that will shake up sales charts. Overall, Lucky revenues are estimated to be about $150 million to $200 million, but Munoz expects Limited Edition to barely ring up a few million dollars. “This isn’t geared to move anybody’s needle,” he noted.

The cool factor is at play here, with the line selling in an under-the-radar manner. Fred Segal in Santa Monica and E Street Denim in Highland Park, Ill., are among the hot shops carrying the numbered styles, as are only 10 of Lucky’s 70 signature stores, including locations at the Third Street Promenade in Santa Monica, Calif., and New York’s SoHo district.

“It’s a great classic product with lots of originality, good finishes and it’s saleable in a world where things may be spectacular, but are really flash-in-the-pan,” said Thomas George, who purchased about 60 to 80 units for his E Street Denim store.

Retail experts say it’s another push for differentiating the almighty brand, and adding cachet to the rest of the line.

“There’s a hunger for unique items,” said Carrie Williams, owner of Seattle-based Brand Lab, a strategic brand agency, specializing in apparel accounts, “and even though the average Lucky customer might not be able to afford the item, it enhances the perception of the company.”