Lucky Brand Jeans is getting younger. 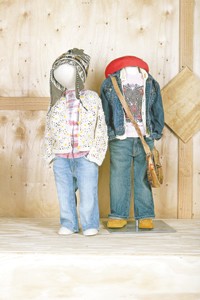 Joining a trend in contemporary sportswear, the retailer and manufacturer, based in Vernon, Calif., plans to introduce a new store concept in late August called Lucky Kid.

“It has the Lucky Brand Jeans’ spirit, the same stuff, only smaller,” company co-founder Barry Perlman said of the line, which features flared-leg jeans, T-shirts and hoodies for children ranging from six months to six years old.

The first three stores will be located on State Street in Santa Barbara, Montana Avenue in Santa Monica and in The Westchester mall in White Plains, N.Y. All will open in August.

A capsule Lucky Kid collection was introduced in December 2005, and is available on luckybrandjeans.com and in 15 select stores. Retail price points range from $22 for a cotton onesie to $68 for jeans and $148 for a satin bomber jacket. The company plans to sell the full collection in dedicated stores, online and through displays in 25 of its 100-plus boutiques.

“The time was right,” Montesano said.

Asked whether the Liz Claiborne-owned company was concerned about saturation, Montesano said, “We don’t concern ourselves with what other brands are doing. We felt it was the right time to launch Lucky Kid, which is as unconventional and unique as Lucky Brand Jeans, and it stands apart.”

As for the line’s inspiration, Perlman said, “A lot of us here at Lucky Brand Jeans have kids, and we draw inspiration from them every day.”

The company also plans to expand in other directions, launching the Lucky No. 6 fragrance for men and women this fall and planning an estimated 35 more retail doors by the end of 2006, as well as more neighborhood stores throughout Europe in 2007.