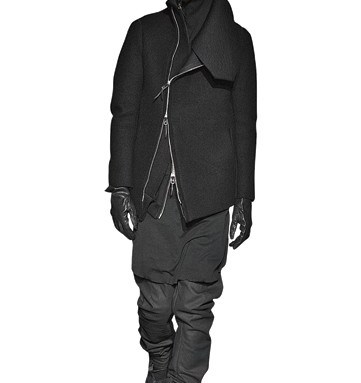 BORIS BIDJAN SABERI
Backstory: The half-German, half-Iranian designer’s dark and minimalist vision is quietly becoming a household name among the avant-garde set. “My heritage is very much a part of my work,” says Boris Bidjan Saberi, 32, adding that his signature brand has registered double-digit growth since its spring 2008 debut.
Fall highs: Barcelona-based Saberi channels his precise dark aesthetic through protective sculptural leather wraps and zipped jackets in thick felts. For next season, the designer plans to launch a secondary line, as well as a limited edition range, dubbed 11 of 11, after his lucky number. It boasts 11 different items, which will be sold in 11 stores worldwide.
At the counter: The largely under-the-radar label is already carried in stores such as L’Eclaireur in Paris and L’Atelier in New York.

OLIVIER BORDE
Backstory: Authentic craftsmanship is fast becoming a signature for Montpelier, France–born Olivier Borde, whose approach revolves around the reinterpretation of classic pieces. “Less consumption, more durability, but when we buy a jacket, we buy the right jacket,” says the 34-year-old Paris-based designer. “My approach to design has always been deconstructing and reconstructing sportswear in an artisanal and avant-garde way. I work directly with the fabrics, I assemble the fabric and, like a sculpture, little by little, it takes form.” In 2004, Borde cofounded and codesigned the Charles Anastase label before parting ways with the house in 2008 to launch his own men’s wear collection. The line was selected for the Festival d’Hyeres in its debut year.
Fall highs: Borde revisits the canons of traditional bespoke elegance and American sportswear. Riffing on classic jackets in washed cotton, wool, corduroy and denim, he plays with a palette of subdued shades of navy, gray, cream and cherry red, and incorporates his signature patchwork styles. “I envisioned Savile Row suits in houndstooth or herringbone passed from generation to generation and worn with youthful defiance,” Borde notes.
At the counter: Japan’s Beams picked up items from the collection, including corduroy jackets and washed looks, for fall.

BARNABE HARDY
Backstory: After cutting his teeth at Balenciaga and launching the label’s men’s wear alongside creative director Nicolas Ghesquière in 2002, Barnabé Hardy, 34, decided to fly solo with his eponymous collection of leather jackets in 2008. “The handbag is to a woman what the leather jacket is to a man,” says Hardy from his Paris-based studio. The designer is a firm believer in the mantra, “less is more.” “Brands have overdiversified their offers,” he explains. “Clients are looking for specialized savoir faire.”
Fall highs: Hardy decorates structured motorcycle jackets with geometric prints, while reversed and cropped shearling jackets caught the attention of retailers. Also up for next fall is a capsule knitwear collection modeled after his leather jacket designs.
At the counter: Paris’ Bon Marché and The Webster Miami were the first to introduce Hardy to their respective markets last spring. For fall, Hardy also counts Hong Kong’s Joyce and Berlin’s Cartier 206 among his growing clientele.

J.W. ANDERSON
Backstory: Born in Northern Ireland, Jonathan William Anderson graduated from the London College of Fashion with a degree in men’s wear design in 2007 and showed for the first time off-schedule in London in September 2008.
Fall highs: Awarded NEWGEN Men sponsorship to show his fall collection during London Fashion Week, Anderson, 24, reinterprets men’s wear classics with unexpected fabrics such as silk tulle over knits and shearlinglike cashmere, while marrying the Irish countryside with a rebellious street vibe. “The collection is based around the idea of obsession, love, friends and family…with cross sections of grunge,” Anderson says.
At the counter: The U.K.’s ubertrendy online retailer Oki-ni.com picked up the collection for fall, as did Liberty in London, Coco de Mer in Los Angeles and H.P. France in Tokyo.

E. TAUTZ
Backstory: The prestigious London West End tailor, which was founded in 1867 and has dressed the likes of the Duke of Windsor, Winston Churchill, David Niven and Cary Grant, is undergoing a renaissance. Owned by Savile Row tailor Norton & Sons since 1968, the label was relaunched in January 2009. Patrick Grant, who is also Norton & Sons’ director, is working a fresh spin on high-end English ready-to-wear classics with the label by putting the focus on craftsmanship.
Fall highs: Best known for its tailored sporting and military looks, Grant sources artisans from around the U.K. to work on the upcoming E. Tautz collection. He travels to Scotland’s Hebrides for handwoven Harris tweed and fisherman’s sweaters, for instance. Oversize glen check fl annel suits add to the quintessentially English flare.
At the counter: Barneys New York, Selfridges, United Arrows, Edifice and Galleria in Korea picked up the collection for fall. The label is already stocked by Matches and Beams.

BURKMAN BROS.
Backstory: Brothers Doug and Ben Burkman, originally from Toronto, both spent several years designing men’s wear for Gap. They also travel extensively as freelance fabric designers. The result? Preppy casualwear infused with a sense of adventure.
Fall highs: This season, the brothers channel the Himalayan city of Shimla, the summer capital of the British Raj. As a finalist for GQ’s third annual Best New Menswear Designers in America competition, they got to showcase a capsule collection at the magazine’s New York Fashion Week party.
At the counter: Through the Capsule trade show in Paris, the label’s fourth collection was picked up by European stores including Oki-ni (U.K.), Antonia (Milan) and Sportivo (Madrid), and, in the U.S., Barneys is rolling it out to its entire chain.

UMIT BENAN
Backstory: Designer Umit Benan has been lauded for his collection’s sartorial quality, wit and unique point of view. For fall, he envisioned a present-day meeting of classic rockers like the Rolling Stones and seminal producer Ahmet Ertegün (who shared the designer’s Turkish roots). He imagined they would dress for comfort but still exude charisma.
Fall highs: As the winner of Italy’s first Who’s on Next award for emerging men’s wear designers, Benan had the opportunity to present during Pitti Uomo. He staged a debauched dinner party of aged rockers at the restaurant of the Santa Maria Novella train station.
At the counter: Umit Benan’s store accounts include Maxfield in Los Angeles, United Arrows and Beams in Japan, Browns in London and Colette in Paris.