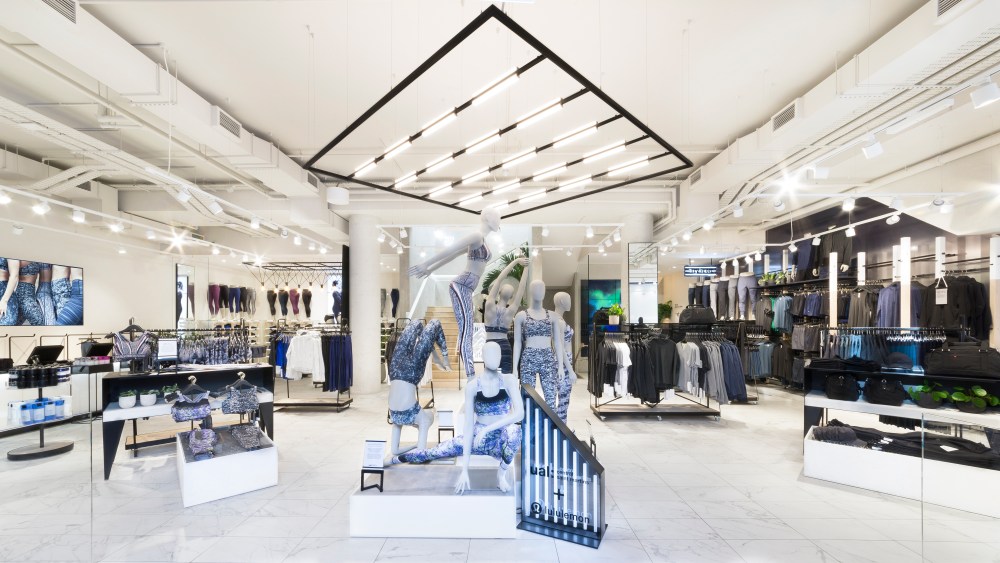 LONDON — Lululemon will open a digitally focused London flagship on Regent Street this week and has teamed with Central Saint Martins on a capsule range to mark the launch. The Regent store will be the most high profile of the brand’s nine units in London and Edinburgh.

Located at 187-191 Regent Street, next to Bose and Hackett, the 6,344-square-foot store spans two floors. The Canadian athletic apparel company’s in-house development team worked with design agency Dalziel & Pow on the classic, polished interiors which have been done in marble, and in shades of gray and bronze.

The store, which opens Thursday, will carry men’s and women’s apparel and accessories.

“Regent Street is one of the streets to be on,” said Lululemon creative director Lee Holman. “The building is beautiful, and it’s an opportunity to be in the center of London. The location is amazing, and it has different consumers from an international and European base — which is really attractive.”

The first floor features a concierge desk, which offers advice ranging from running routes to local restaurants, and London tourist information. Also located on the level is a digital installation and large screens playing the brand’s films and advertisements.

“One of the things we wanted to showcase within Regent Street was motion, and how we bring the digital and physical into that store,” said Holman. “There are a lot of digital screens, and we have a concierge part of it where you can come in and talk about local studios as well as cafés in the neighborhood.

“In the changing rooms, we have a booth that actually shows the reflective [qualities] of the product — which you wouldn’t normally see in store lighting,” he continued. “I’m excited about having a lot more of motion mannequins, ones that are actually in yoga poses.”

There’s also a café and a community area where free, weekly yoga classes will be held. A “vision and goals wall” will be mounted where shoppers can post their ambitions. Lululemon staffers are regularly asked to express their personal and career goals. It’s integral to the company’s culture.

For the launch, the brand has partnered with London’s Central Saint Martins students on a limited-edition capsule range that will be exclusive to the Regent Street store. Holman studied for his Master of Arts under Fabio Piras, who is now course director at Central Saint Martins, and the two made the project happen.

“I thought if I could do a collaboration with anyone in London it would be great to go back to a university where they are really about innovation for the future,” said Holman. The project had a turnaround time of two weeks, and the company selected six designs to be used.

“The students on CSM’s MA Fashion course share Lululemon’s design-led approach and passion for innovation,” said Holman. “We looked at how we could take these incredible works of art they produced to create beautiful functional [solutions] that could both perform and flatter the body in movement.”

The result was a Lululemon x Central Saint collection that features the Energy bra at 68 pounds, or $82 at current exchange, and the Wunder Under high-rise pants at 138 pounds, or $160.

The company plans to collaborate with CSM again and expand its men’s wear range, which Holman said accounts for just under 20 percent of the Lululemon business.

The company has more than 250 stores in North America, its largest market. “We’re expanding more to Asia and to Europe, and the Middle East is the next push. I think London has just come naturally before Asia, but we’re working on Asia at the same time. So I’d say those two, outside North America, are our main focus.”

Lululemon is the latest megabrand to land on Regent Street, which has been magnetizing American names like no other major European shopping destination. Over the past six months alone, Coach, Stuart Weitzman and Polo Ralph Lauren have all opened flagships there.

In the spring, Tory Burch will move onto the street, taking up 3,200 square feet of retail space over two floors. The letting is part of a 1 billion pound, or $1.23 billion, investment by property owners and developers The Crown Estate into retail, offices and leisure businesses on and around Regent Street.