NEW YORK — Styles with a glint of glamour and a sense of luxury are proving to be the winning formula for fall.

Retailers placing orders for fall merchandise this month showed a conservative posture as the economy continued to drag in... 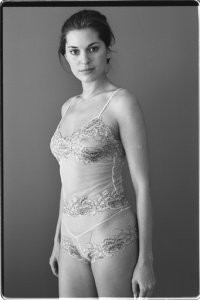 NEW YORK — Styles with a glint of glamour and a sense of luxury are proving to be the winning formula for fall.

Retailers placing orders for fall merchandise this month showed a conservative posture as the economy continued to drag in February. Buyers said they were re-examining where they were putting their open-to-buy dollars with en eye toward the potential clout of new brands to the sector, such as Lucky Brand innerwear at Charles Komar & Sons and Aisease at JWE Silk, as well as European labels like Aubade, Chantelle, Princesse Tam Tam, and 6ixty 8ight, which staged a fashion show and cocktail party to rev recognition.

In addition to Madison Avenue showrooms, buyers had a wealth of international labels to shop at two trade shows: Lingerie Americas at the Metropolitan Pavilion & Altman and the Intimate Apparel Salon at the Millennium Broadway Hotel.

The consensus from merchants was that a mix of mild weather in the Midwest had sparked lingerie sales, while the crippling snow and ice storms in the Northeast and Southeast had taken a toll on Presidents’ Day promotions.

Despite the angst of war and a stagnant economy, orders have begun to filter in. Vendors said the purchasing pattern was going two ways: Major department stores and national chains are buying “on history,” replenishing inventories with basic silhouettes that have a proven track record and lacing orders with the same styles in fashion colors, while major specialty stores and boutiques are going all the way with fashion.

She continued: “It all looked so new and fresh that I was very inspired. What was really great was every vendor had their own point of view. This market was a return to glamour, luxury and gift-giving ideas. I saw missed opportunities we should have had in the past.”

Caetano cited several brands as strong contenders for fall: daywear and sleepwear by Natori black label, which she described as “stunning,” the Oscar de la Renta navy label sleepwear collection at Carole Hochman for “getting better and better,” and La Perla for its upscale specialty foundations.

She noted that Flora Nikrooz and Jonquil offered a “big opportunity” in the special-occasion arena, while foundations by Argentovivo at NAP Inc. and Aubade were “very strong.”

Bob Pawlak, vice president and dmm of intimate apparel and coats at Milwaukee-based Carson Pirie Scott, said, “We are looking for newness, but we have to justify it on the basis of it being salable. We’ve recently had a few good sparks with camis, shorts and short sets. That’s the type of thing you don’t sell in the Midwest this time of year. It’s more a reflection of the weather and I think the consumer is ready for spring merchandise and a change.”

Pawlak added that he had “good hopes” for sleepwear by Lauren By Ralph Lauren and Lucky Brand innerwear.

Jack Klor, foundations buyer at Carson’s, said new product, logos and marketing for the Warner’s and The Body by Nancy Ganz brands at Warnaco “looked good.”

However, he said: “there weren’t a lot of new releases in the market. There were much more controlled releases. We are being more cautious with rolling out new, big ideas into all doors.

“We had a good February,” he continued, “but the first 10 days of March were a little difficult. We’re playing it cautious because of the economy.”

Donna Wolff, vice president and dmm of intimate apparel and hosiery at Bloomingdale’s, said, “There’s definitely a return to fashion and color, and the consensus is that anything new will sell. Oscar de la Renta [pink label] sleepwear at Carole Hochman looked phenomenal; DKNY Underwear looked very hip and fresh with an edge to it, and Lejaby made a lot of progress with a renewed commitment on the part of Warnaco to go after that discerning customer.”

Wolff said she was pleased with Eileen West sleepwear at Charles Komar, which she described as “updated and younger looking,” and Calvin Klein daywear, which “looked very good.”

Wolff said several other brands, such as On Gossamer, Princesse Tam Tam, Champion and Danskin, also had strong product.

“The Infinity group by Cosabella is fabulous, and I liked the combination of daywear and pants. I also thought Natori black label daywear looked excellent with the addition of long pants, which is expanding the category.”

Pam Williams, owner of Night Gallery, a lingerie, apparel and accessories shop in Chapel Hill, N.C., said, “It was great seeing lots of new, interesting merchandise. I feel it will stimulate business for me, even though there will be price resistance. But you’ve got to give consumers something special that will make them want to separate with their money.”

From the salon fair, Williams said she was ordering slips, camis and thongs from a new designer, Caname, and a new group of bras by Cotton Club. At the Lingerie Americas show, she said she plans to buy lingerie from Manuel Canovas, lingerie and swimwear from Eres and Huit, and lingerie from an Italian label, Adea.

Barbara Graves, owner of the eponymous lingerie boutique in Little Rock, Ark., said, “I do think vendors were trying to tell a fashion story and it was much better than I’ve seen in a long time. There was a lot of clarity out there.”

Graves said she will order items from Frou Frou, Samantha Chang, Fantasie of England and Freya, which were shown at Lingerie Americas, as well as several resources who exhibited at the salon show: On Gossamer, Kiyomi PJs, Flora Nikrooz and Nick & Nora. Two other brands that exhibited at both shows are also on Graves’ order list: NK and Cosabella.

Assessing what is currently selling at Isabel Eland, a New Canaan, Conn.-based specialty retailer, co-owner Margaret Lupo said: “It’s a different situation the way women are dressing nowadays. They may want to be casual in T-shirts and jeans, but they continue to buy special lingerie.

“Flora Nikrooz and Cosabella are wonderful for us,” she continued, “and pajamas by Natori and Cotn are blowing out of the store. I also plan to reorder knits by Hanky Panky and Mary Green, and bridal looks from Priamo and Verena.”