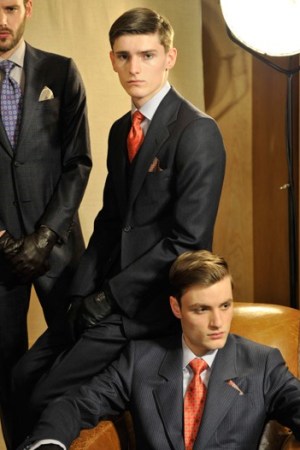 LONDON — Britain’s men’s wear designers are smartening up, taking their cues from Savile Row finery and dapper London men who care deeply about dressing, such as Bryan Ferry, Manolo Blahnik and David Beckham.

“Young people are getting sick of jeans,” said Philip Start, a London retailer and designer, who on Wednesday presented his tailored line, Mr. Start, on the last day of London Fashion Week, which is dedicated to men’s wear. “You can wear tailored or bespoke clothes and still have a casual look.”

Mr. Start this season featured four different fits of tweed jackets in colors such as teal and purple; three-piece velvet suits and gray flannel suits, which are also sold as separates. There was also a surfeit of white shirts with a variety of collars.

“I was thinking about Hardy’s life and sense of style when he was in his 20s and 30s, how he spoke five or six languages and how much he traveled,” said Malcolm, who worked previously with Kim Jones, E. Tautz and Kanye West. “One minute he was on the slopes, and the next he was in a suit.”

Another house that caters to the luxe-loving jet-setter is E. Tautz, which showed a collection inspired by a fall trip to the Isle of Mull. There were oversize wool peacoats in mustard yellow or dove gray, and turtleneck sweaters in maroon or navy had appliquéd lion or castle motifs. Patrick Grant, who owns the brand and its sibling tailoring house Norton & Sons, also sent out a chic take on outdoorsy gear, with a sporty-looking field jacket in gray herringbone tweed and a burgundy gilet done in quilted doeskin.

Both James Long and Topman Design took a rich and colorful route, with Long showing purple tweed overcoats with rounded shoulders; knee-grazing sweater coats with yellow, gray and cornflower blue stripes, and a standout leather coat with jigsaw puzzle-like ponyskin insets. Topman Design had a laid-back, Fifties feel, inspired by photographer Brassaï’s images of Paris nighthawks. Suits came in rough-hewn gray herringbone, while chunky fishermen’s sweaters and fine knit cardigans in gray, maroon and navy were often shot through with gold or silver Lurex thread. Christopher Raeburn’s collection of outerwear for men and women, filled with military-inspired silhouettes, had grosgrain ribbons sewn into the seams of coats and leather toggles on gray duffle coats made from blanket fabric.

The edgy yin to the tailored and sophisticated yang of the season came from the emerging talents at Fashion East and the group show Man. At Fashion East, Matthew Miller’s outerwear came in wool felt in colors such as bright yellow or Yves Klein blue, while Astrid Andersen’s offered up rapper-inspired blingy parkas with mink tails and colorful satin bomber jackets.

At Man, the Topshop-sponsored group show that has a reputation for being experimental, designs ran from the simple to the all-out wacky. Felipe Rojas Llanos’ collection included ankle-length capes with structured shoulders and jersey T-shirts worn with shiny cropped pants, while New Power Studio designer Thom Murphy showed olive velour sweatsuits worn with bracelets that held burning incense. Martine Rose sent out the most wearable collection; designs included bomber jackets made in a patchwork of waxed cotton and fleece.

Jonathan Anderson proved his flair for unisex dressing with a punkish schoolboy collection for J.W. Anderson that worked just as well on men as it did on women and featured slim wool pants, chunky parkas and skinny mohair sweaters.

Katie Eary had one of the wildest collections of the week, inspired by Frankenstein and the 1950s, with leather biker gear covered in panels of neon pink, green and leopard skin prints; artfully crafted patent leather T-shirts cut to look like giant spiderwebs; crinkly green foil trousers and fluorescent pink or green rubber jackets with shearling collars.