PARIS — When Europe’s largest crane rumbled into Paris this May, it was obvious something big was brewing.

Then a 40-ton sculpture arrived and workmen spent two days hoisting the behemoth 100 feet into the air and lowering it into... 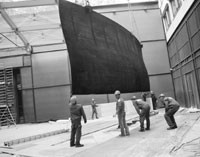 PARIS — When Europe’s largest crane rumbled into Paris this May, it was obvious something big was brewing.

Then a 40-ton sculpture arrived and workmen spent two days hoisting the behemoth 100 feet into the air and lowering it into the courtyard of a building on the Avenue Montaigne.

The building happens to be the new, sleek Jean-Michel Wilmotte-designed headquarters of the world’s largest luxury group, LVMH Moët Hennessy Louis Vuitton. And the sculpture, an impressive iron wave by Richard Serra called “Single Double Torus,” is the pièce de résistance of the firm’s minimuseum, rounded out by Matthew Barney’s “Jachin and Boaz” and Chris Burden’s “Tyne Bridge.”

The troika of contemporary stars makes a striking statement. And it’s a symbolic one for LVMH.

Though it has been among France’s top corporate patrons of the arts for more than a decade, the luxury conglomerate has mostly tied itself to France’s past cultural glory. For years it has sponsored the blockbuster museum exhibit of the season here. There have been retrospectives of Cézanne, Chardin, Poussin and de la Tour — all funded by LVMH’s munificence.

Meanwhile, the firm has plunked down millions to restore parts of the Chateau de Versailles and the gardens at the Palais Royale.

By all means, LVMH has shown deep pockets. But the choice of contemporary works to adorn its new headquarters marks a subtle evolution in its artistic focus.

For the first time, it commissioned new works: videos by Doug Aitken, Gary Hill, Ugo Rondinone and Michal Rovner, which are screened twice daily on monumental video columns in the new building’s foyer.

LVMH has opened the collection to the public on Saturdays, attracting some 400 visitors a day.

Jean-Paul Claverie, who trained as a doctor and was an aide to French culture minister Jacque Lang in the Eighties, has overseen the company’s philanthropic activities since 1991. He admits that the headquarters’ emphasis on contemporary art breaks new ground — proudly stating that LVMH is the first to exhibit a major Serra sculpture in France.

Yet Claverie emphasizes that LVMH has championed modernity for years by commissioning architects to build corporate headquarters and stores around the world.

“There’s definitely a development of contemporary art at the headquarters,” explains Claverie. “And there will be more evolutions.

“But this doesn’t date from yesterday,” he continues. “We have been very innovative with architecture. Architecture is art of the highest order.”

LVMH’s strategy to sponsor art is a long-standing one that has been used to dispel the notion that it is only concerned with figures and profits.

“It broadens the world of LVMH and gives us contact with the public,” says Claverie. “For LVMH, the holding, there are only products with the LVMH brand. One is the stock. The other is derived from our association with the arts.”

Claverie says art has “federated” LVMH’s diverse businesses — from wines and spirits to fashion houses including Louis Vuitton, Christian Dior and Givenchy — and employees with the “common values of creativity and innovation.”

“Bernard Arnault refuses to differentiate between contemporary art and ancient art,” stresses Claverie. “His interest lies in supporting art that has transformed the way the world is seen by its creativity.”

LVMH’s generosity is a real commitment, but an effective image booster for a firm that last year had almost 12 billion euros, or $14.63 billion at current exchange, in sales. With each museum exhibit LVMH sponsors, its name figures prominently on posters, catalogues and promotional materials.

“It has the right connotations,” explains Claverie. “It promotes the same values as those on which the group is founded: heritage and creativity.”

LVMH takes a proactive approach to sponsorship. “We don’t wait to be solicited before offering money,” says Claverie. Many of the exhibits LVMH has sponsored, including the hit Matisse-Picasso offering, were initiated by the firm, he adds.

Claverie declines to say how much LVMH allocates to cultural sponsorship. “It’s the one figure that Arnault doesn’t like to give,” he quips. “Our daily business is about figures. But art is about a dream — and a dream can be sullied with money.”

Nonetheless, it is widely believed that LVMH spends more than $2 million for each major exhibit it underwrites. Each year it also awards 5,000-euro ($6,098) scholarships to a handful of young art students to study abroad.

Music is another important focus of LVMH’s patronage. It awards Paris conservatory students tickets to major concerts and hosts classes for young musicians. And it lends the three Stradivarius violins it owns to budding virtuosi.

LVMH also helps health charities and has donated money over the years to such diverse causes as the development in Haiti.

“It’s important to be socially responsible and to give back,” says Claverie. “All of the projects we sponsor, whether it be art or medicine, are initiatives for the future.”