By Amanda Kaiser and Robert Murphy on July 28, 2006
View Slideshow 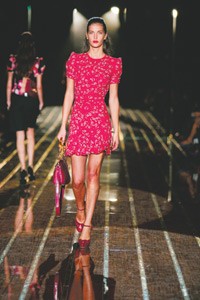 The growth at PPR was driven by “impressive” gains at the Gucci Group division during the quarter, with sales climbing 24.3 percent to 470.6 million euros, or $591 million, from 378.6 million euros, or $477.4 million, in the corresponding period a year earlier. All currency conversions are made at average exchange rates.

During a conference call on Thursday, PPR chief financial officer Jean-Francois Palus said luxury delivered double-digit gains in “nearly all regions” and that the division’s growth pace had accelerated even further in the second quarter. (Gucci Group’s sales rose 18 percent in the first quarter.)

Gucci, steered by chief executive officer Mark Lee and designer Frida Giannini, continued to be the luxury division’s cash cow. Sales of leather goods, dresses and knitwear turned in the best performances, Palus said, adding that sales were up double-digits in all geographical zones and in all categories.

Palus singled out timepieces as a category that saw vast improvement thanks to the best-selling Twirl watch. He said Gucci would “accelerate” store openings in the second half, led by two new units in Japan.

Bottega Veneta saw sales leap 81 percent in the period to 58.3 million euros, or $73.2 million, from 32.6 million, or $41.1 million, a year ago. The brand recorded double-digit gains in all categories and all geographic zones as it continued to aggressively expand its retail network. The company opened eight stores in the first half of the year, including units in Cannes and Tokyo.

Positive developments materialized at Yves Saint Laurent, which is struggling to move out of the red. Palus said the brand’s leather goods sales improved 43 percent on the strong performance of the Muse bag, and that YSL had seen “high double-digit” gains in ready-to-wear, driving sales forward to 42.2 million euros, or $53 million, from 33.1 million euros, or $41.7 million, last year.

Sales were strongest in the United States, where they increased 46 percent, and in Europe, where they gained 20 percent, Palus said.

Among the group’s other designer brands, Palus saluted Balenciaga as “going from strength to strength” and for being one of PPR’s “star” performers. “Sell-through is up in every product category,” he said.

Stella McCartney also received special kudos for her London-based brand’s double-digit growth. Palus said the designer’s spring-summer collection had been her “most successful collection to date.”

Boucheron, Alexander McQueen, Sergio Rossi and Bedat & Co. are the other businesses included in PPR’s so-called “other brands” division, where combined sales improved 12 percent to 72.7 million euros, or $91.3 million.

“With an acceleration on already robust first-quarter growth evident at Gucci and Bottega Veneta and encouraging signs of recovery at YSL, [PPR’s] luxury formats have outperformed its peer group in the second quarter and maintained momentum,” wrote Lehman Brothers analyst Allegra Piaggi in a research note.

“YSL posted the biggest positive surprise in luxury,” she added.

PPR’s retail operations were less stellar, however. Sales in the division, which includes the FNAC music and book chain and the Conforama furniture stores, edged ahead only 4 percent to 3.28 billion euros, or $4.12 billion.

Last month PPR sold its Printemps department stores to a group of investors led by Maurizio Borletti, chairman of Italy’s La Rinascente department stores. The move seemed to signal a move away from lower-margin businesses in favor of more profitable luxury activities.

“I am therefore confident that the group is going in the right direction and, in accordance with the guidance already given to the market, I confirm my optimism also for the next months,” Trapani said in a statement.

In March, Trapani stated that full-year 2006 sales should grow 8 to 9 percent, with profits increasing at a similar pace in the “high single-digits.”

Although Trapani was unavailable for further comment, a spokesman reiterated that the Bulgari family is not interested in selling the company, responding to speculation that the firm is an acquisition target.

Revenue from accessories, a product category the company is emphasizing through a dedicated chain of stores, climbed 18.4 percent to 22.1 million euros, or $27.8 million.

Sales advanced in every geographic market, but growth rates in Europe, especially Italy, slowed in the second quarter from the first three months of the year. Accelerated sales momentum in Asia offset results in Europe.

Sales in Japan jumped 30.3 percent to 65.7 million euros, or $82.8 million. Volume in the rest of Asia grew 8.2 percent to 37.2 million euros, or $46.9 million, showing a significant recovery from a 20.3 percent drop in the first quarter. Bulgari said it registered promising Asian sales despite the weakness of some local markets and a more conservative strategy toward distribution. Last year, Bulgari shuttered some wholesale accounts in Asia to prevent the reselling of stock to Japan.