Luxury Brands Are Running Fast With the Sneaker Trend

As luxury brands continue to capitalize on mainstream sneaker culture, the global sneakers market is expected to reach $88 billion by 2024.

LONDON — Louis Vuitton was one of the highlights of the men’s spring 2020 season, with Virgil Abloh transforming the secluded Place Dauphine into a tourist destination with an ice cream truck, balloon artists and Eiffel Tower keychains. He also debuted the 508 High-Top LV Trainer — an Air Jordan-like model with cream lilac and blue suede finishing and red nylon laces. There was a new, unnamed running sneaker style on offer, too, and both were accessorized with plastic luggage tags, serving as a reminder of Vuitton’s heritage in travel.

Vuitton has been offering sneakers for a long time, but it was only after Abloh came on the scene that they became as desirable as a Keepall Bandoulière — at least to the streetwear community. Vuitton certainly needed to catch up, considering that Kering’s Balenciaga, Gucci and Alexander McQueen brands have been serving up hot sneakers constantly in recent seasons.

More sneakers than ever were spotted on the men’s spring runways — as well as on the street — even though many designers said the general trend is towards a more “dressed up” style, and away from streetwear. Sneaker designs ranged from collaborations such as Undercover x Nike; Ambush x Converse; Asics x Kiko Kostadinov; Craig Green x Adidas, and Random Identities x Li-Ning to swanky models such as Rick Owens’ bondage-inspired low-tops and Byredo’s Byproduct sneakers made from leftover leather from the production of Byredo handbags.

Brands now see sneakers as a key driver for business, sparking a new conversation with the younger generation and bringing in a big chunk of revenue. 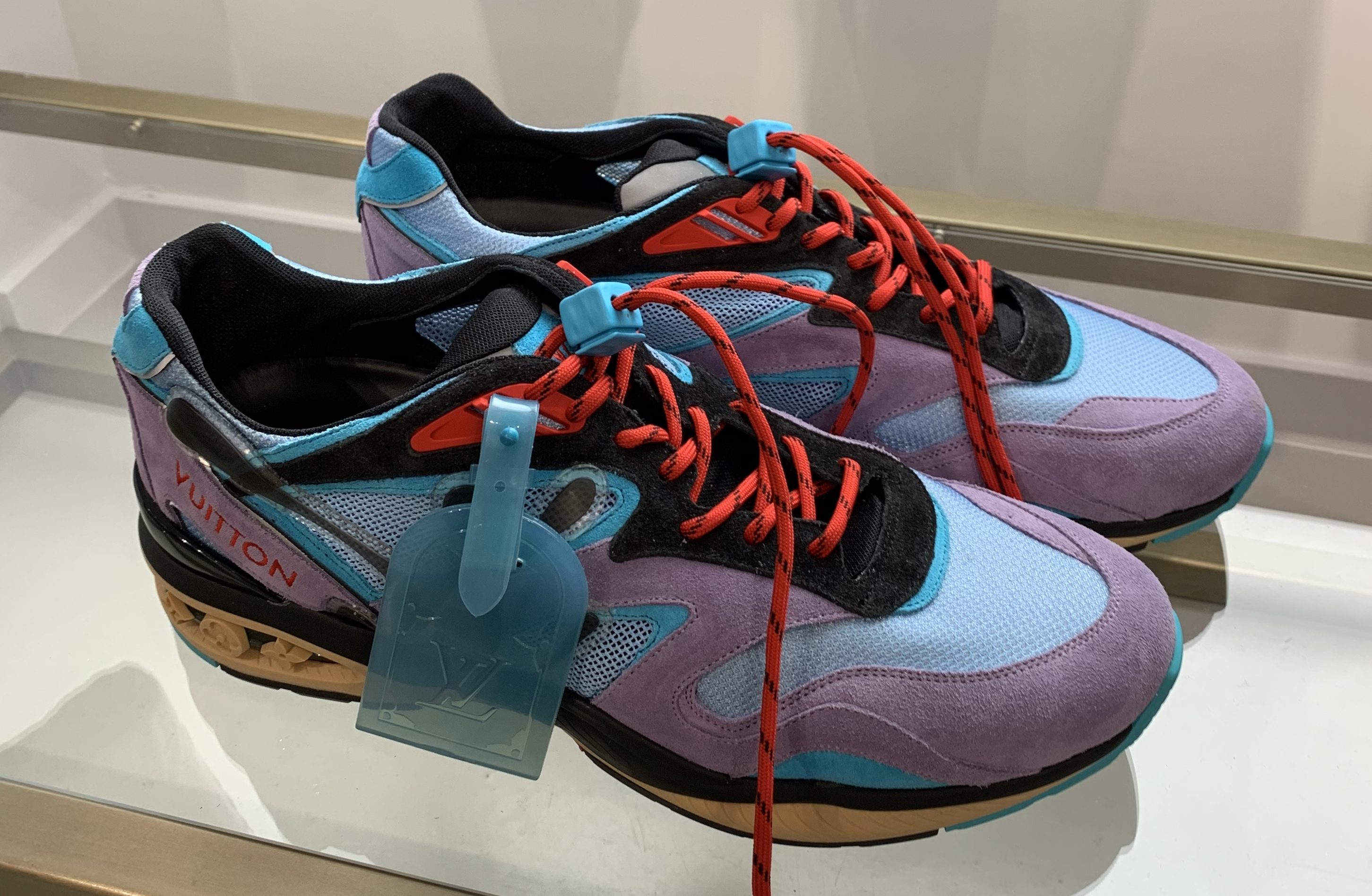 The global sneaker market stood at $58 billion in 2018 and is projected to grow at a compound annual growth rate of more than 7 percent between 2019 and 2024, reaching $88 billion, according to a report released by TechSci Research.

The report also cited “a growing consumer inclination towards branded and high-fashion footwear.”

Read More: A Day in the Life of a RealReal Streetwear Appraiser

“Fashion sneakers opened a new door, a new market for new consumers who are style- and silhouette-driven,” said Yassine Saidi, who worked with Balmain on the sneaker, and who was previously head of fashion collaboration at Puma. 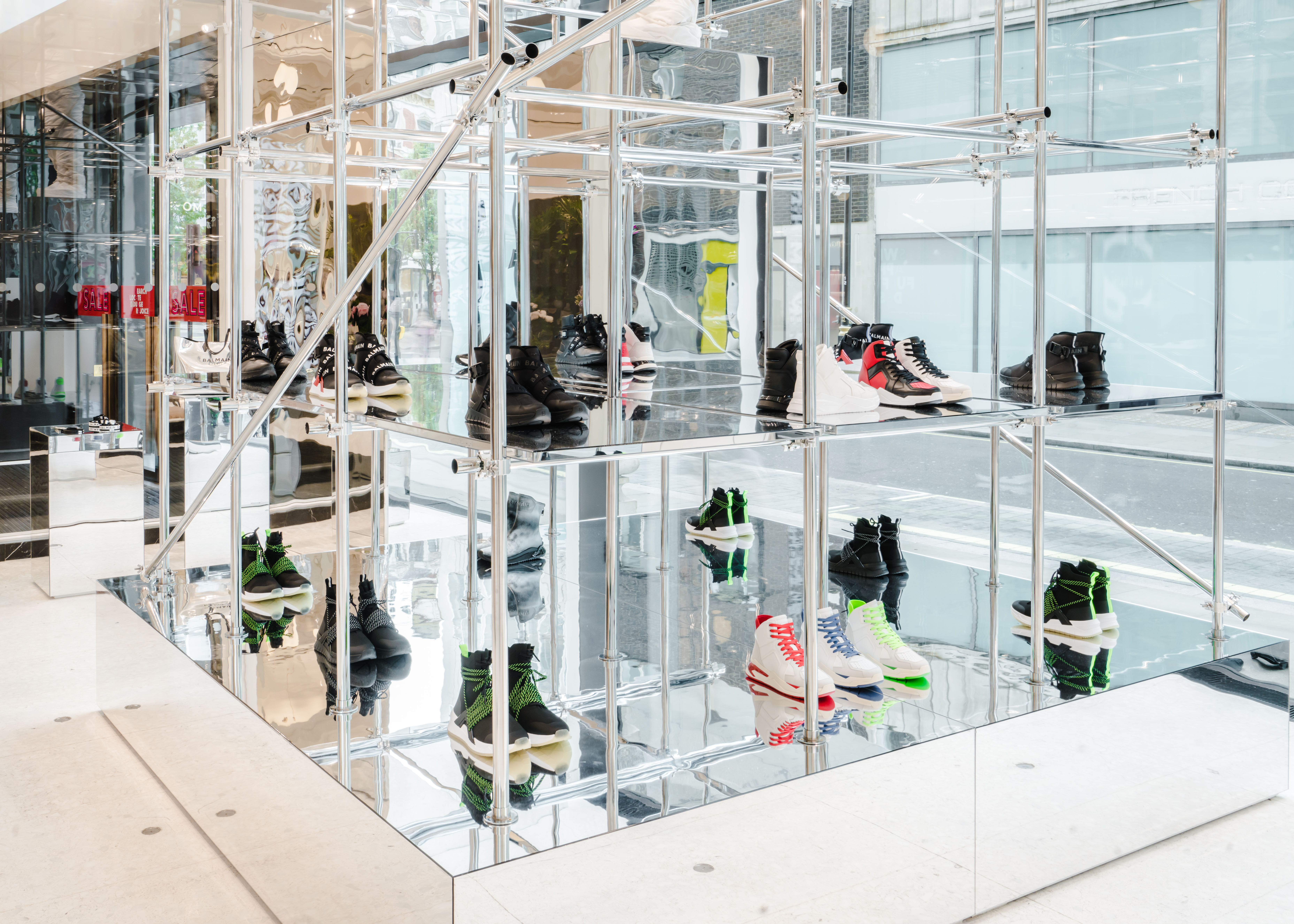 Like silk scarves, small leather goods and fragrances, sneakers have become the latest entry point into luxury and customers are willing to pay top dollar for what they see as high-status investment pieces. They even are prepared to pay top dollar for resold sneakers, hence the skyrocketing valuations of web sites like StockX, Grailed and Stadium Goods.

Prices of even new styles are climbing to new heights as brands begin to introduce ever more complex and luxurious models.

Jimmy Choo released the Diamond trainer for men and women in October last year, and it was a game-changer for the brand. The lacquered, lightweight chunky sole is faceted like a gemstone and the vamp glitters with 5,000 Swarovski crystals. It costs 2,795 pounds (other versions start at 600 pounds) and has been generating waiting lists since the launch.

With aesthetics often trumping functionality, very few people will be wearing any of these for actual running, but what does that matter? These are status symbols, after all, and the designs are getting even more elaborate, with Christian Louboutin embellishing its sneakers with studs and Versace transforming the J.Lo green dress into a pair of sneakers. 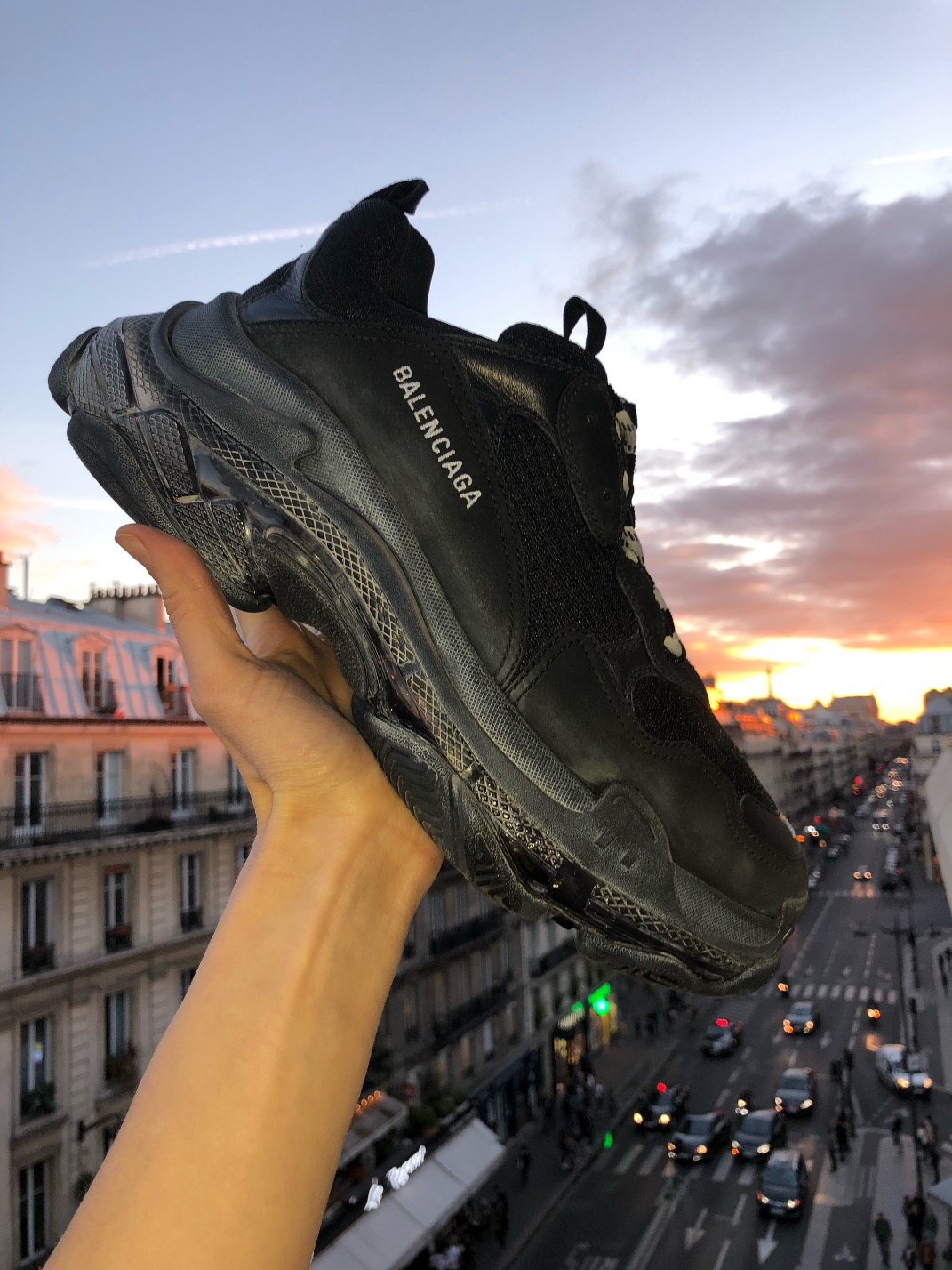 While aesthetics are a priority for the luxury brands, there are exceptions, notably the Balenciaga Triple S model.

“Triple S was considered a bad design, but it was a hit on the market. It’s a design that has an identity and is something that stands out, something that you would buy,” said Saidi. “This is what brands in the fashion industry are trying to do. Fashion brands are hiring designers from the sports industry to get to their level because it is a real category, a real business.”

He added that some designers are eager to make the leap from sports brands to luxury ones. “They want to be able to do those 700 euro sneakers because then they are not limited by the cost of product. They can truly design,” he said. “But there is a place for both worlds. You will have designers who are going to be very good at delivering a pair of 150 euro shoes, and you are going to have very talented designers who are really going to be able to push boundaries and offer a design at 700 euros-plus.”

David Tourniaire-Beauciel, who has worked in the business since 1992 and who was responsible for designing the Triple S and Speed models for Balenciaga, said fashion and luxury sneakers are on the rise for different reasons altogether.

He believes luxury brands are paying more attention to sneakers now because “the new generation of creative directors were born in the sneaker moment. When they build a collection, the sneakers are a natural part of the product planning. For previous generations, sneakers were more perceived as a pejorative product — not chic, not elegant, just for people who sweat.”

In the Nineties, he remembers that brands were happy to license their footwear collections to factories such as Kelian, Jourdan and Clergerie. “For the ready-to-wear luxury brands, shoes were considered only as an accessory. It was not an important strategy or business segment,” he said.

Later, in the 2000s, and despite the fast-growing shoe business, brands were focusing their attention on ‘It’ bags. It wasn’t until “It shoes” became a thing in 2010, that the category became a strategic segment for a luxury brand. “With smartphones, you don’t need a big bag anymore, but you still need shoes,” he said.

Tourniaire-Beauciel echoed what a host of other brands have been saying — that young women’s bags are getting smaller because their iPhones already hold everything. Also, they no longer need a big bag to carry formal shoes to work because they’re spending the day in their sneakers.

It may have taken a while, but it seems the big brands are finally catching up with the casualization trend that has washed over developed countries like a tidal wave.

“The world had a reality check about three years ago,” said Wayne Kulkin, former chief executive officer at Stuart Weitzman and founder of Street Trend, a company he set up in 2017 that now owns luxury sneaker brands P448, Sneaker GPS and PS821.

“Even though I had a corporate job as a ceo of a structured company, I had all these sneakers. I loved sneakers. Once people had a taste of wearing a sneaker, versus wearing a wingtip, there was no comparison. I don’t think that the world is ever going to go back to people wearing really structured clothes or really hard shoes — like stilettos for women,” he added. 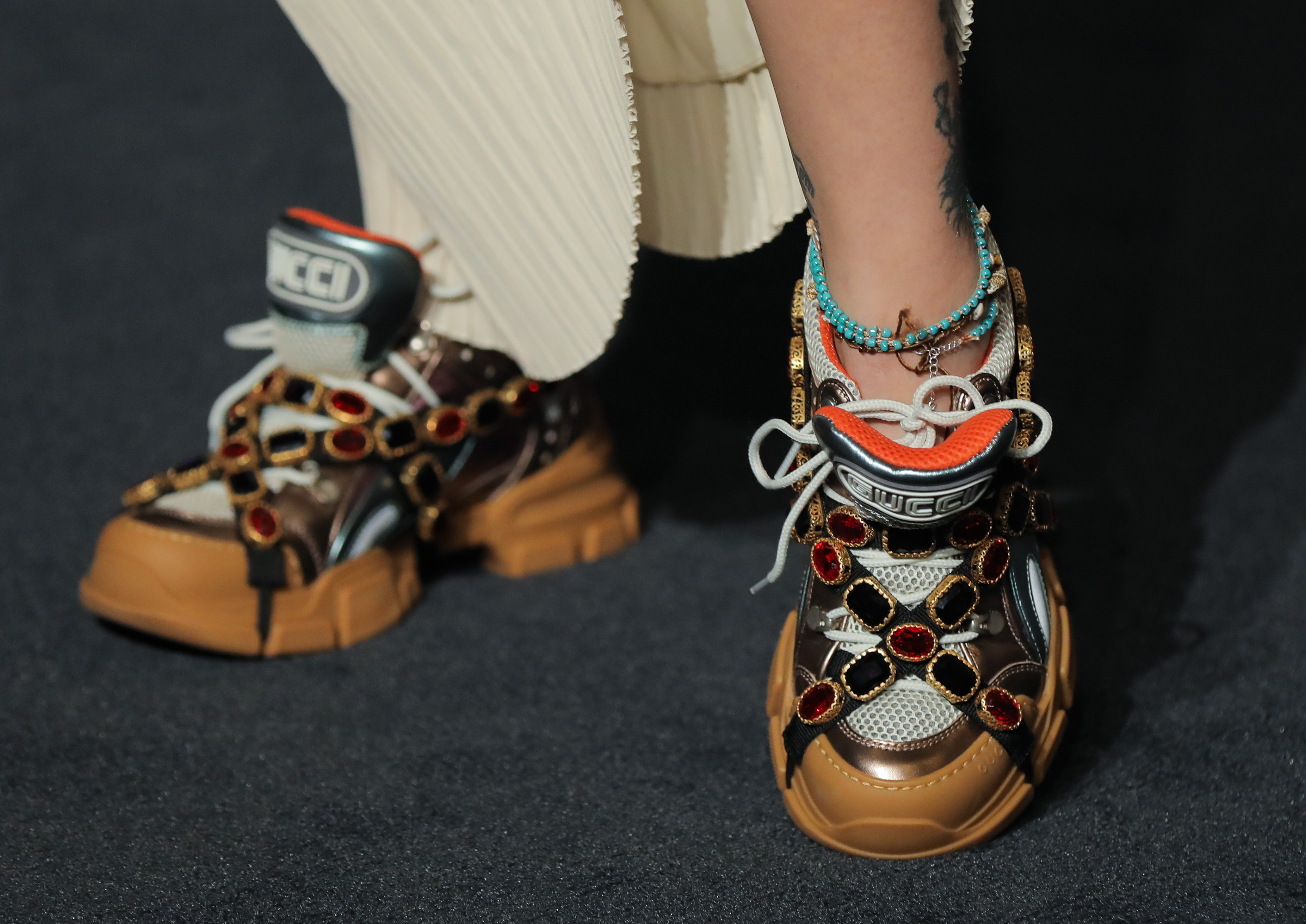 Tourniaire-Beauciel thinks technological advancement has allowed luxury brands to “propose a new kind of savoir faire with new materials, new forms and new volumes, to show that they are part of the time.” Riding on that trend, he launched the direct-to-consumer luxury sneaker brand Shoes53045, offering sneaker-shoe hybrids with bubble air comfort platforms where the technology is visible from the outside.

On the shop floor and the online marketplace, luxury sneaker sales are showing good momentum. According to market sources, Harvey Nichols had a record-breaking week of sales in the men’s sneaker section last month, while Alexander McQueen sneakers are now generating more than 20 percent of the brand’s revenue.

Men’s luxury sneakers make up 18 percent of the sneaker offering of End Clothing, a men’s wear retailer with stores in London, Glasgow and Newcastle, England, while more than half of the sneakers sold on Mr Porter are at a luxury price point. That percentage goes up to more than 80 percent for Matchesfashion.com.

On the sneaker and streetwear resell platform StockX, a number of luxury sneakers have been performing very well over the past few years. Not surprisingly, Jesse Einhorn, data content director at StockX, said the best-selling luxury brand is Balenciaga, while other top-performing brands include Louis Vuitton, Versace, Rick Owens, Chanel, Gucci and Dior.

“Over the past two years, their most popular model has been the Triple S. It began reselling in significant volume around late 2017, with the Triple S Black White Red colorway leading the way in StockX sales.  More recently, we’ve seen increased interest in the Balenciaga track sneaker, which has, in many cases, overtaken the Triple S models in terms of StockX sales volume,” Einhorn added.

BorderX Lab, a cross-border platform that helps Chinese shoppers buy items all over the world, told WWD that sneakers and streetwear overtook beauty to become the number-one category in October 2018, and demand for high-end men’s and women’s sneakers is high.

“We are seeing an overall rise in interest in sneakers and streetwear sales rise in triple digits across the platform. For example, Gucci, Balenciaga and Off-White are leaning into the category and even sneaker sales at brands like Bally, Miu Miu and Jimmy Choo are seeing an uplift in sales from China,” said Nancy Zhang, head of partnership at BorderX Lab.

Christopher Morency, editor at large of Highsnobiety, a streetwear platform that recently expanded into e-commerce with a “drop” business model, said it’s a mistake to think that sneakers are a trend.

“For the current generation and for the next, a sneaker is as much of a wardrobe staple as a top or outerwear. For some brands, adopting sneakers won’t work, however. Whereas brands like Gucci, Louis Vuitton and Versace have always been adopted by youth culture as aspirational brands, other, more traditional labels have never appealed to a young demographic. Releasing a generic sneaker won’t equal credibility with young demographics,” he said.

“The brand cache must be there, and the design, marketing and celebrity association must be innovative and authentic if one wants to resonate. Bottega Veneta and Valentino are good examples of brands that might not have appealed to a younger demographic in the past, but have successfully seen a turnaround in their sneaker strategy in recent seasons,” he added.

StockX’s Einhorn said: “We expect the demand for luxury sneakers to increase as high-fashion brands continue to capitalize on mainstream sneaker culture. Brands have even begun to incorporate the drop model into their release strategies, further indicating the convergence of luxury and sneaker culture.”