LVMH Looks to Suburban Paris to Find Artisans of Tomorrow

PARIS — “I never knew leather was so heavy,” gasped a teenager as she picked up a scrap of raw material at the Compagnons du Devoir booth, one of the 15 schools at this year’s edition of the Village IME, a vocational fair sponsored by LVMH Moët Hennessy Louis Vuitton’s Institut des Métiers d’Excellence, or institute for métiers of excellence, held on Jan. 15.

Founded in 2014, the program aims to open up opportunities for kids to discover the group’s métiers across a range of domains and learn about work-study apprenticeships done in partnership with top French schools in jewelry, dressmaking, watchmaking, leather goods, client advisory, retail design, winemaking, gastronomy and beauty. They include the École de la Bijouterie-Joaillerie de Paris for jewelry, the Chambre Syndicale de la Couture Parisienne for fashion and Les Compagnons du Devoir for leather goods.

The fair is held at Espace 93 in the notorious Paris suburb of Clichy-sous-Bois. “It’s important to be where the people we are reaching out to are,” explained Françoise Schoenberger, director of social development at LVMH. “In 2016, the IME embarked on this project in partnership with Clichy-sous-Bois and Montfermeil to help end any self-censorship. We want kids from the area to stop thinking that working for a luxury group like LVMH is impossible.”

The basis of the IME is to create a bridge between the luxury business, in constant need of trained artisans, and students planning for the future. Via its partner schools, it offers training from vocational to MBA level, and is open to both students and adult learners.

“It’s a win-win situation,” said Schoenberger. “For a long time, manual careers were looked down on in France. But businesses in the luxury sector need skilled artisans to survive. Hopefully we’re helping people to realize that a career in luxury craftsmanship is not only prestigious, but also durable.”

Since its creation in 2014, the IME has trained 500 students, 80 percent of whom have gone on to pursue their studies or have found a job in the luxury sector. As well as the 15 schools, the IME, which is also present in Italy and Switzerland, has inked partnerships with 33 luxury houses including Christian Dior, Louis Vuitton, Celine, Guerlain, Veuve Clicquot and Sephora.

Beauty is the latest area the IME is taking steps in. The institute has just unveiled a graduate degree in cosmetic formulation in joint partnership with the ISIPCA, a beauty school in Versailles, and the technical university of Orléans, at the heart of the French “cosmetic valley.”

“We created this degree based on the needs of the industry,” said Florence Rambaud, director of the IME. “The beauty sector, like the other sectors we work with, needs people who have a real luxury savoir faire. That’s how we operate.” 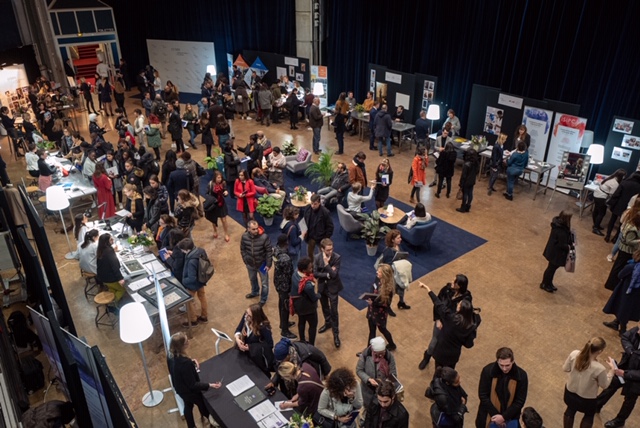 The IME fair at Espace 93 in Clichy-sous-Bois.  Courtesy

At the busy fair, booths featured the name of the school and those of its partners in the sector, while students in training proudly wore badges stating their place of apprenticeship.

Noémie Auzet, who was demonstrating “gouaché,” an illustration technique used by jewelry houses for archival purposes, to visitors at the École de la Bijouterie-Joaillerie de Paris booth, has just started a work/study apprenticeship at Chaumet. “I’ve always wanted to work in high jewelry, but I thought I should get a background in art and design first,” said the 25-year-old.

If it hadn’t been for the IME, she might never have managed to get into the jewelry school. “I took my time, which was risky because jewelry training starts young,” said Auzet, who received a graduate degree in applied arts and a post-graduate degree in design from the Beaux-Arts. “But the IME doesn’t look at the age of potential students, something that schools often focus on. For them, motivation and experience are what matters.”

Experience is what helped Clément Pélisson catch the eye of the beauty divison of Givenchy, where he is doing an apprenticeship four days a week, spending Fridays studying for his masters in design at the Ecole Duperré.

“It’s usually super hard to know where to start when you’re looking for a company to do an apprenticeship in,” said the student, who, after graduating from Penninghen, a Parisian architecture and design school, started working for magazines and fashion brands as a freelance set designer. “I found the IME on LinkedIn, did a bit of research and applied to their program. They took care of everything from there. It was super fluid.”

The institute organizes recruitment sessions to put students directly in contact with potential tutors. “But thanks to my experience as a freelancer, Givenchy scouted me right away,” said Pélisson, who comes from Aubervilliers, a suburban town located north of the 18th arrondissement of Paris. “Everything aligned instantly.”