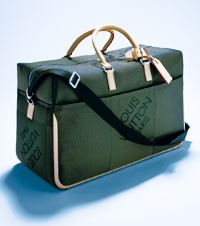 Gaining momentum in an improving climate for luxury, LVMH Moët Hennessy Louis Vuitton cited organic sales growth of 10 percent in the first quarter of 2004, its best showing in the past five quarters.

The French luxury giant on Thursday reported consolidated sales of 2.85 billion euros, or $3.57 billion, a 1.7 percent increase versus the year-ago period, when sales stood at 2.8 billion euros, or $3.01 billion. Dollar figures are converted from euros at the average exchange rate.

The results bested consensus expectations and the firm goosed its outlook by forecasting a “significant increase” in operating income for 2004. Previously, LVMH had been more reserved, calling for a “tangible” increase. LVMH does not report income on a quarterly basis, but only at the half-year and year-end stages.

“We are more confident in our forecast. It is good news for us, and for the market,” Patrick Houel, LVMH’s chief financial officer, said during a conference call to discuss the results. “We had a very good start to the year and we are much more optimistic than we were in December.”

All five operating divisions reported underlying growth, reflecting a “more favorable economic and monetary environment,” improving tourism and expanding economies in the U.S. and Asia. For example, LVMH sales were up 19 percent in the U.S. in local currency.

Goldman Sachs analyst Jacques-Franck Dossin said the figures imply a very strong March, with like-for-like sales for the group advancing about 15 percent, above what the company suggested was a 7 percent pace in the first two months.

Dossin said very good performances in the wines and spirits and watches and jewelry divisions were the main surprises, with the latter boding well for Swatch and Compagnie Financière Richemont.

Led by a double-digit increase at its cash-cow brand, Louis Vuitton, sales in the fashion and leather goods division totaled $1.3 billion, or 1.07 billion euros, flat in reported terms, but up 7 percent when the impact of currency and a changed group structure were stripped out. HSBC in Paris estimates Louis Vuitton’s sales growth at 13 to 14 percent in the quarter.

New products created by Vuitton creative director Marc Jacobs, such as the Theda bag, along with Giant Damier luggage, made a “hugely successful debut” in the three months ended March 31, LVMH said.

Vuitton’s performance varied by region. In the U.S., where the world’s largest Vuitton store bowed in February at Fifth Avenue and 57th Street in New York, sales were up more than 50 percent, with the Manhattan unit alone pulling in more than $1 million per week. By contrast, sales in Japan were flat, due to lower domestic sales there — reflecting an uptick in Asian travel — and the fact that several of Vuitton’s competitors likely benefited from higher sales ahead of announced price increases.

But Houel said the period was “atypical” for the country and that “we think it will be a good year for Louis Vuitton in Japan.”

During the conference call, it became clear that Donna Karan was a major drain on the fashion and leather goods division in the quarter, due to store closures and the loss of revenues from the European jeanswear business, which is now licensed. In total, Karan revenues were down about 30 percent in dollar terms.

LVMH said it expects some further declines at Karan for the balance of the year and didn’t rule out more store closures, but stressed that cuts were focused on “unprofitable” sales and would not affect earnings in the division for the full year.

During the conference call, Houel noted Celine, Berluti, Marc Jacobs and Pucci continued to show positive sales growth. The four companies were deemed businesses with strong potential by the group when it announced its fourth-quarter and year-end results in March. The performance of other brands in the division — ranging from Givenchy and Christian Lacroix to Loewe — was described as satisfactory.

Several analysts expressed disappointment with the performance of LVMH’s largest division, fashion and leather goods, also sensing in the figures a hit from Fendi, which is still in a significant investment phase.

The picture continued to improve in the selective retail division, with a rebound in Asian tourism benefiting DFS and innovations at Sephora accelerating that company’s progress. Sales in the division inched up 1.5 percent in reported terms to $920.1 million, or 756 million euros, with organic growth standing at 11 percent.

LVMH said sales at Sephora in the U.S. were up more than 20 percent on a like-for-like basis in the quarter, with Europe up around 6 percent. Revenues at sephora.com, which recently expanded to Canada, were up more than 50 percent, LVMH noted.

The watch and jewelry division logged the strongest improvement of the group, up 16.5 percent in reported terms to $137.5 million, or 113 million euros, or 30 percent organic growth. LVMH said the rebound began last summer and was led in the quarter by double-digit gains at Tag Heuer and Zenith.

Wines and spirits showed effervescence in the U.S., U.K. and Japan, with champagne leading the 10.8 percent reported growth to $548.9 million, or 451 million euros, a 19 percent organic gain. LVMH also highlighted strong sales of cognac in the U.S., Russia and Asia.

Shares of LVMH, which have been gaining steadily as the luxury sector rebounds from the impact of the Iraq war and the SARS outbreak last year, went down 1.4 percent on Thursday to close at $73.51, or 60.40 euros, on the Paris Bourse.