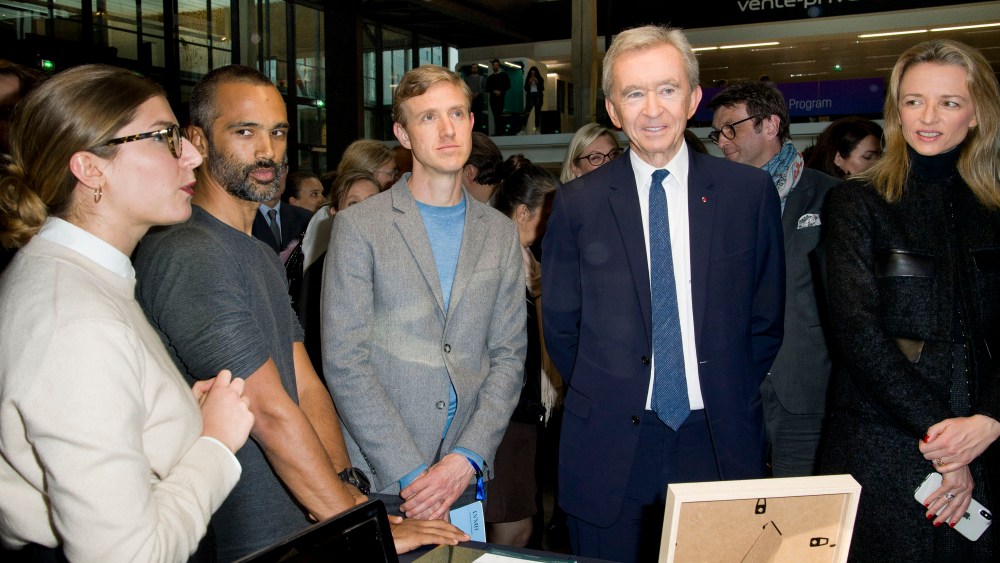 The space will serve as a year-round physical base for a curated community of start-ups developed through various initiatives implemented by LVMH since the arrival of the group’s chief digital officer Ian Rogers two and a half years ago.

LVMH chairman and chief executive officer Bernard Arnault on Monday led a select group of journalists on a tour of the area — measuring around 2,400 square feet with 89 work stations — discovering the innovations of a handful of start-ups from the program. The business magnate was flanked by Rogers and his son Frédéric, head of connected technologies at Tag Heuer, as well as Station F founder Xavier Niel and his life partner, Arnault’s daughter Delphine, who is executive vice president at Louis Vuitton — the group’s largest brand — and a member of the LVMH board.

In an upbeat mood, Arnault personally tested Memomi’s Memory Mirror, a digital mirror platform harnessing a combination of artificial intelligence with virtual and augmented reality to allow customers in real time to virtually try on products such as clothing, eyewear, footwear, accessories and makeup. He sampled a range of augmented wood materials by Woodoo and checked out a new generation couture mannequin robot by Euveka, but politely declined a bespoke cocktail proposed by connected mixologist Kuantom.

“For me, this place is so great, I’m starting to wonder if we shouldn’t move the LVMH headquarters here, things would certainly run more smoothly, and it would be less expensive. That could be an idea for a start-up,” quipped Arnault during his speech at the event, reminding the audience of the start-up roots of his group.

“We have a historic proximity to the start-up world. A lot of our brands started from scratch, going back to Christian Dior in 1947. The first thing he did was ask his first assistant of the time, Pierre Cardin, to go and buy a sewing machine,” said Arnault. “We have continued to innovate each year, most recently with the launch last September of a beauty start-up by a certain well-known singer called Rihanna. From zero, we went on to generate several hundreds of millions in the first year and are expecting to reach almost 500 million euros in revenues this year.

“The thing these firms [on our program] have in common is that they have an innovative idea and want to develop it. The second, which is very important for us, is that they have the entrepreneurial spirit needed to get things done as efficiently as possible no matter how many countries you are present in. We find this spark in the companies present here and that’s why we want to stay close to them,” he added.

Arnault told journalists a fusion with a tech company was not on the cards. “We are users of technology but we are not a tech group, it’s a different métier,” he said. “You cannot mix fire and water.”

Media-shy Niel took the opportunity to point out a specificity of Station F. “Forty percent of the start-ups here were created by women, and it’s a place that is directed by women,” he said, handing over the microphone to the site’s communications director Rachel Vanier.

Set to welcome 50 international start-ups yearly, in two six-month terms, the LVMH program, which had its soft launch in November, is geared at accelerating collaboration between start-ups proposing solutions and services for the luxury market and LVMH’s portfolio of 70 brands. All of the start-ups selected are already in discussion with, or developing projects with, one or more of the group’s brands, according to a statement.

Over half of them were identified through the LVMH Innovation Award introduced last year in partnership with the annual Viva Technology fair, set to celebrate its third edition this year. Areas span artificial intelligence; augmented and virtual reality; retail and e-commerce; blockchain and anticounterfeiting, and raw materials and sustainability.

Trend anticipator Heuritech — winner of the inaugural innovation award in 2017 — figures among the program’s first batch of start-ups. Others include VisioPM, specializing in digital signage solutions; Aryballe Technologies, which develops and sells portable, connected noses, billed as the Shazam of odors; SmartPixels, which creates “digital skins” for product displays and is already working with brands including Guerlain and Berluti, and Cypheme, an artificial intelligence capable of detecting a counterfeit product by analyzing the microstructure of the packaging using only a picture from a smartphone.

LVMH employees who have won awards on the group’s DARE LVMH intrapreneurship program, introduced last July, will also be invited to the space to develop their projects. One is said to involve the creation of a new LVMH brand.

Station F is billed as the largest start-up campus in the world, measuring 58 meters in width and 310 meters long — the equivalent of the Eiffel Tower lying down. Based in a reconverted freight station in Paris’ 13th arrondissement, it was designed by French engineer Eugène Freyssinet in the Twenties, with architect Jean-Michel Wilmotte behind its new incarnation.

Among other actors moving in on the space, L’Oréal in October inked a strategic partnership with Station F to support the development of early stage digital beauty start-ups around the globe.

The driving motive for La Maison des Startups, explained LVMH’s Rogers during an interview in the run-up to its launch, was to “funnel” the torrent of start-ups in the group’s space and nurture relationships with the most relevant crop throughout the year in a dedicated space.

LVMH will provide workshops, networking sessions and seminars, with personalized coaching and support from in-house experts.

The second edition of the group’s innovation award has attracted applications from more than 800 start-ups, almost 60 percent more than last year, Rogers said. Around 30 finalists selected by a group of journalists and venture capitalists will present in the group’s Luxury Lab booth at Viva Technology in May, with a new winner to be selected.

“One of things we’ve discovered is that LVMH is so vast there are challenges of scale,” explained Rogers. “There are so many start-ups in our space, they call the brands directly, and the brands are looking for solutions.”

He said some firms contact him, others reach out to Alexandre Arnault, son of Arnault and co-ceo of German luggage maker Rimowa, while others call on Groupe Arnault, the investment firm controlled by the Arnault family. “There’s no way to get your arms around it,” Rogers said.

“Alexandre Arnault was the one who said, ‘Hey, let’s do something big that gives us a rhythm. Let’s create a moment where we build a relationship with the ones that matter,’” he added. “Instead of it being totally ad-hoc, there’s a process. What I’ve learned is, if you don’t formalize it, you don’t stand a chance. It’s death by a thousand cuts. It gives us a place and a way to prioritize.”

The idea is also to encourage interactions with the group’s “maisons.”

“We hosted Claude Martinez, president and chief executive officer of Parfums Christian Dior, and he spent three hours with the start-ups. Laurent Boillot [Guerlain’s president and ceo] is down there a lot as Guerlain has a team working out of there,” said Rogers, adding that the meetings are set up in a spontaneous manner so as not to create too much distraction for the start-ups.

“I’ll speak for myself and Alexandre Arnault: I’ve done a number of start-ups myself, and he’s in the start-up community — it’s not a corporate zoo. I don’t want it to be like, ‘Come look at the start-ups, these foreign creatures.’ [What we look at is], what are some legitimate ways that we can help their businesses, that we can learn from them, get inspiration,” he said.

Rogers described Station F as being like a little city, saying of its scale, “I’ve never personally participated in anything like it.”

“We wanted it to be a beautiful, comfortable place to work but not extravagant,” he said of the LVMH space.

“When you’re a start-up, you don’t need to leave Station F, you can do everything there; you can eat, interact with the French government, make use of the post office — it’s just amazing,” continued the executive, who, prior to being tapped by Arnault, worked on the launch of seven start-ups in the music business — including Mediacode, which was purchased by Yahoo — and headed up the launch of Apple Music.

Groupe Arnault, Aglaé Ventures, the early stage investment program of Groupe Arnault, and LVMH Luxury Ventures, a new investment entity for emerging brands launched last year, are open to investing in the start-ups, but “It’s mostly about having this focal point,” he said.

“What is certainly true is that Groupe Arnault is aware of every start-up, it’s on their radar…You just want to have that relationship,” added Rogers. Asked if there are other similar initiatives in the pipeline, he replied: “Right now, we’re open. And I think that’s very much the start-up way.”