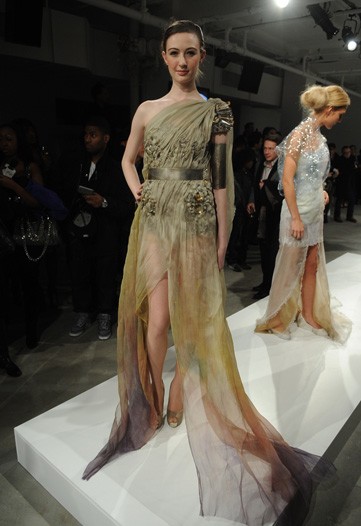 NEW YORK — Parsons The New School for Design and LVMH Moët Hennessy Louis Vuitton teamed up for a genre-spanning competition to spread awareness of the importance of craftsmanship. “The Art of Craftsmanship Revisited: New York” was held Thursday and unveiled the final designs of 23 five-person teams of Parsons students.

The gathering took place at Milk Studios, where the 23 designs were showcased on two separate raised platforms.

LVMH and Parsons have a history of collaboration, particularly since Renaud Dutreil, chairman of LVMH North America, began his tenure in New York City. Simon Collins, dean of the School of Fashion, explained the impetus of this particular tie-up, saying: “We heard that Renaud was passionate about artisans, and at this school, in all our different disciplines, we teach artisans. It became very obvious that we should be working together.”

Collins and Dutreil cited a symbiotic relationship between the organizations — where Parsons feeds skilled employees to LVMH and LVMH frequently serves as a sponsor and inspiration for Parsons students. “There is a very nice bridge we can build between the new generation and artisans, thanks to Parsons,” said Dutreil. These types of efforts are supported from the top down, as “Bernard Arnault [chairman and chief executive officer of LVMH] is very supportive of this vision,” said Dutreil.

The collaboration was also unique in that it united different schools of education with one another to pursue the same goal.

“The design of the garments obviously came from [teammates from] the school of fashion, but they learn they’re really getting a picture of how the design industry functions,” said Joel Towers, design dean of Parsons.

From start to finish, the competition required the teams of five-to-six students from different disciplines (ranging from design and management to photography) to meet with their selected artisans and then create a garment. The artisans were chosen by LVMH and included a stained glass artist, a luthier, a silversmith and a ceramicist, among others. Additionally, the entire process was filmed by members of the team. The winning students, who will be judged by their look as well as the video documentary, will be revealed in June.

One group, Team Soft Armor — made up of Ishita Shah, Jeataun Jones, Basak Haznedaroglu, Alessandria Redley and Shula Ponet — had the task of studying an artisan of custom metalwork. Upon entering E.R. Butler and Co., the group was immediately drawn to a handcrafted birdcage, an inspiration that they translated into a hard-wired bodice ensemble.

Jones said what they learned most from the challenge was how to “take an inspiration and run with it.”

Shah added, “Also, you need patience if you want it to be beautiful. It takes time and, in the real world, you don’t always have a whole semester.” In fact, the teams had far less than a semester — barely three months from start to finish.

Mizani said they learned to look at different materials in new ways. “We wouldn’t have normally thought to have used the materials [such as heat-sensitive and eco-sustainable fabrics] that we did.”

Most importantly, added Dunne, “We learned how to turn a concept into a garment.”

There is also a larger goal behind the LVMH/Parsons tie-up, which is to reinforce the integral importance of artisans and craftsmanship in society. Dutreil believes the importance of the artisan behind the brand needs to be recognized culturally. “Before the [economic] crisis, people had a kind of fake vision of what luxury is. Luxury is first high-quality products mixed with the vision of a designer,” he said. “Now, it’s a time of truth.…I think it’s a good time to pay tribute [to these artisans].”