The French luxury group hosted a cocktail to kick off the third year of its competition. 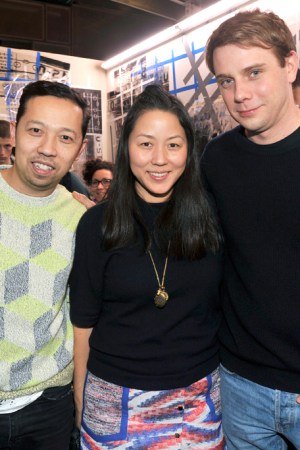 PARIS — You could scour the globe for months to unearth the most promising young fashion talents — or just stroll into the headquarters of LVMH Moët Hennessy Louis Vuitton on Wednesday night.

“So many different nationalities,” Delphine Arnault, the force behind the LVMH Prize, marveled as she toured the stands of the 23 semifinalists, flown in from as far afield as Kuala Lumpur, Malaysia; Tehran, Iran; Tokyo; New York, and Xiamen, China. “It’s great to meet all of them. There’s so much energy, even if most of them arrived only yesterday and are jet-lagged.”

This story first appeared in the March 4, 2016 issue of WWD. Subscribe Today.

A key talent scout at the family controlled luxury group, and second in command at Vuitton, Arnault noted that the contest is open to anyone under age 40 who has produced and sold at least two women’s or men’s ready-to-wear collections. And all they need is access to a computer to apply — and almost 1,000 did, eager to secure a grant of 300,000 euros, or $325,000 at current exchange rates, plus a year of coaching.

A member of the jury stacked with LVMH design stars that will choose the ultimate victor in June, Givenchy’s Riccardo Tisci was struck by how young people all over the world tap into unexpected inspirations. For example, he inspected the oversize designs of Männistö by Julia Männistö.

“The fashion is about football, very American, but done in Berlin and the designer is originally from Colombia,” he said.

Simon Porte Jacquemus, who scored a Special Jury Prize last year, said he could sense the nerves in the room. The designer said the prize money and year of coaching did him good. “It helped me frame my business and to be an adult in a way,” he said.

Montreal-based Vejas Kruszewski, 19, said he already sells his collection to Opening Ceremony, as well as doors in Australia and Japan.

He described his approach as “a wardrobe for the not-too-distant future. What excites me is taking something familiar and making it alien,” he said, showing off bubble-shaped sweatshirts with curving seams, cropped to echo the curves of the rib cage.

Asked about the best business advice he ever received, juror Jonathan Anderson didn’t even pause. “Never compromise,” he said.

Semifinalists, each housed in a booth like a trade show, were arranged alphabetically, so Matthew Williams of Alyx and Brandon Maxwell were many attendees’ first stops. The two designers already knew one another, having one major client in common: Lady Gaga.

Maxwell is her current stylist, who dressed her in a custom ivory evening pants ensemble from his collection for the Oscars Sunday night, and Williams used to be her creative director at the beginning of her career. “I did all her image, music videos and all her costumes when [Maxwell] was an assistant for Nicola [Formichetti, Gaga’s former stylist],” said Williams, who designs Alyx out of his St. Mark’s Place studio in New York. Now in its third season, the collection of edgy, urban wear is sold at 30 retailers, including Dover Street Market New York, Colette, Antonioli, Isetan and Joyce. “I’m trying to create a full wardrobe for women — knitwear, denim, shoes, lingerie, suiting,” said Williams, who was already acquainted with several jury members.

He used to assist a friend of Humberto Leon and met Tisci at former client Kanye West’s wedding. So much for being star struck in a room full of fashion heavyweights.

“I’m actually really f–king excited to see J.W. Anderson,” Willliams said. “I think he’s amazing and inspiring. He’s the same age as me, too, so respect to him.”

Maxwell, who showed his second eveningwear-oriented collection during New York Fashion Week, was more easily impressed. “It was kind of a strange moment to walk in the room and have Anna Wintour come in with 10 cameras all of sudden,” Maxwell said. “When you’re jet legged, to try to find even a word to come out of your mouth, that was interesting and fun.”

Jury members Carol Lim and Leon of Opening Ceremony and Kenzo were already familiar with several of the designers, including Ms Min, Y/Project, Cottweiler and Aalto, having stocked them early on. “It’s [great] to see a lot of these designers that we saw their first season in a basement showroom, and now seeing all these amazing people being able to converse with them,” Leon said.

Asked what he looks for in the competition, Leon said, “One of the common questions is, ‘What will you do with the money?’ It’s interesting to see what different people answer. There’s no wrong answer, but seeing the collection and the path they’re choosing is an interesting dynamic.”

Christelle Kocher, who is competing for the second year and who designs under the Koché label, said she would use the prize money to set up a proper business structure and build production.  “We don’t even have a ceo. It’s really about taking it to the next level after what has been an organic evolution. And I would also love to have e-commerce,” she added.

The semifinalists had a series of pressing questions for their would-be mentors. “How can we keep up with the shift to see-now-buy-now in retail,” asked Astrid Andersen. “Because for us it’s completely impossible. We need six months to produce a collection.”

“What market should we focus on and how?” wondered Glenn Martens of Y-Project. “I know there are many techniques of how to penetrate a market, but it’s all [dark] matter to me,” he shrugged, while Chloé’s chief executive officer Geoffroy de la Bourdonnaye was snapping pictures of his new fall proposal at the booth.

Gaining global visibility was on the minds of Iranian duo Shirin and Shiva Vaqar. “There are no international fashion magazines in Iran. No Vogue, no W…and the local ones are censored,” said Shiva, adding that the only source for local designers to stay informed is through the Internet. But she added: “Everything is getting better now. There is no much talent in Iran. I hope it will open up soon,” she said, hinting at the country’s recent elections, which brought a surprising victory for the moderates.

Part of the jury this year, model Karlie Kloss — dressed in a short Louis Vuitton number — said she was compiling a personal wish list from the emerging talents. “I’ve got an early start on my shopping. I said I need this leather bodysuit from Wanda Nylon, a jumpsuit at Vejas, and one of these cool, funny jackets from Moto Guo,” Kloss enthused.

Karl Lagerfeld said if he had to give a single piece of advice to the youngsters it would be this:  “You have to know what you want, where you want to go, what you want to do — and what you don’t want to do,” he reasoned at the habitual warp speed. Just don’t come to him with any business questions. “I’m not in business, that’s the way I am. There is a job for everyone.”

An expert committee is to whittle down to eight finalists, who are to gather on June 16 at the Fondation Louis Vuitton in Paris to face the jury. Besides Arnault, Lagerfeld, Tisci, Anderson and the Kenzo duo are Vuitton’s Nicolas Ghesquière; Céline’s Phoebe Philo; Marc Jacobs; Jean-Paul Claverie, an adviser to LVMH chairman and ceo Bernard Arnault and the group’s director of sponsorships, and Pierre-Yves Roussel, chairman and ceo of LVMH Fashion Group.