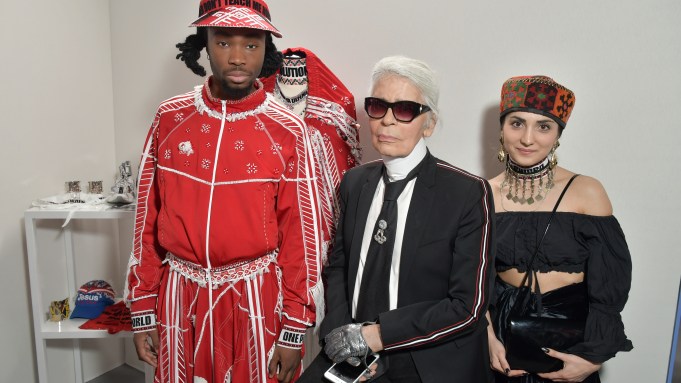 PARIS — The presentation of the 21 semifinalists for the LVMH Prize for Young Designers in Paris was a celebration of an increasingly mobile generation of young designers.

But with one designer absent due to visa issues and two others relating tales of last-minute battles against red tape, the event was also a reminder of the powerful political forces that threaten to curb the free movement of talent that the fashion industry has long depended on.

In the era of President Trump’s attempted curbs on immigration, Brexit and the rise of far-right political movements in France, The Netherlands and elsewhere across Europe, open borders may soon be going out of trend, members of the industry fear.

The presentation, held at the headquarters of luxury conglomerate LVMH Moët Hennessy Louis Vuitton on Avenue Montaigne, showcased labels based in the U.S., Japan, South Korea, New Zealand, the U.K., Germany, Taiwan and Denmark, among others.

But Maria Kazakova, the Russian designer behind the New York-based label Jahnkoy, had to join in via Skype after getting stuck in New York due to visa issues. Having graduated from The New School’s Parsons School of Design, she recently applied for an artist’s visa.

“I’m transitioning from one visa status to another one, so in that small amount of time I can’t get out, otherwise I have to reapply from Paris and it might take a long time or I might not get back, so I was advised not to go at this moment, unfortunately,” she said.

Kazakova, whose designs use recycled fabrics sourced in her Brooklyn neighborhood, said the Republican administration’s efforts to curb immigration were likely to complicate matters for some people, although she noted that it was never easy to secure travel permits.

“Yes, of course, we have a lot of complications now, I guess, for different countries. I mean visas in general are a tricky thing, because for some people it’s easy to get it, for some people it’s not. Same way if I want to go to London — it’s hard to get there,” she said.

Kozaburo Akasaka, who is also based in New York, similarly rushed to process the paperwork on his residence status to make it to Paris in time. “I don’t think it’s because the administration has changed,” he said. “But maybe people’s mind-sets are getting a little bit changed.”

Dilara Findikoglu, a Turkish-born London-based designer, also faced obstacles in leaving the U.K. to travel to Paris for the LVMH showcase.

“I’ve gone through so many difficulties, it was such a nightmare to get my passport back. I’ve been crying every day thinking I wouldn’t be able to come for the LVMH event,” said Findikoglu, explaining that in early January she applied to renew her U.K. business visa, a process that can take up to six months. During this time, the British Home Office held her passport, leaving her with no means of leaving the country.

“I couldn’t get hold of anybody, I even went to Sheffield to the home office but there’s no one who will talk to you there. I resorted to the Turkish embassy and in the end they managed to expedite the process to four weeks, following letters from both the Turkish embassy and LVMH,” said the designer. “But up until the day before my train was booked, I had no answer. It was a very upsetting process for me.”

Trained at Central Saint Martins, Findikoglu is known for her rebellious, politically minded aesthetic. She considers her namesake brand to be British and found the visa application process unfair.

“I thought this is inhumane, this isn’t how you should treat people. I’m a designer, I studied in the country, I’m a British brand — I give a lot, you know?” she said. “I might not have a British passport, but I consider myself a Londoner and can’t imagine living anywhere else. My brand, too, is all about London and the majority of my inspiration comes from the city; it is a mix of my Turkish origins and my experiences in London.”

However, the designer was more positive when it came to the effects Brexit will have on the way her label operates. She has been successfully growing her wholesale business over the last year, with launches both in the U.K. at Selfridges and in the U.S. at Moda Operandi and Nordstrom.

“We don’t really know what’s going to happen, but thankfully nothing has affected my work so far. The main problem was that last season I wasn’t able to travel to Paris to be at my showroom, which I think probably lost me a few clients, since I wasn’t able to physically be there to represent my brand,” she said.

The British Fashion Council is taking note of the issues London’s international designers face and of the potential financial impacts Brexit could have on their businesses. It is working with the government to shape policies that will help address such issues by conducting designer surveys and case studies.

“Since the referendum, the BFC has engaged directly with government, as well as through organizations including the Creative Industries Council and Creative Industries Federation, whose remit is to ensure our challenges and opportunities are presented to government in one coherent message,” said BFC chief executive officer Caroline Rush.

“The government has asked us to continue to work with them to help shape their policy. They are in need of specific statistics, some of which we will be able to build from our annual designers’ survey and others that we will compile into an online survey to go to a broader audience. We will also require case studies to bring to life specific industry challenges around IP, skilled workers and tariffs,” she added.

Daniel Fletcher, a British national who specializes in men’s wear, said he considers himself fortunate to have had the pre-Brexit opportunity to work for Louis Vuitton for several seasons.

“That’s an opportunity that could be taken away,” he said. “We’re losing this sense of community, of unity.”

Carol Lim, the co-creative director of Kenzo who sits on the LVMH Prize jury, said the climate for U.S. designers may soon change, especially if Trump comes through on his threat of slapping customs duties on imported goods.

“If you think of what’s happening in the U.S. and if you think that’s a cue, we could be entering into a phase where everyone is looking inward and not in a fluid, cross-border way of thinking,” she said, noting that it may no longer be viable for U.S. labels to produce their clothes overseas.

“I speak just from experience with Opening Ceremony. We produce in the U.S., which we’re super proud of, but we produce a good portion also abroad. If those policies change, you know, it’s a ripple effect. We’re really close to the factories that make our clothing and we visit them often.

“We know their families and that’s been part of how we’ve grown our business. All of a sudden, that’s not going to necessarily be a viable option, unless we decide to totally change our pricing structure, so these are things that we’re considering across the board and we don’t know what’s going to happen,” Lim said.

“It’s not scary, but there’s definitely going to have repercussions to the way people work,” said the designer.

The previous night, Lim and her design partner Humberto Leon launched a new series titled Kenzo — La Collection Memento No. 1 based on the history of Kenzo Takada coming to Paris in 1968 and founding his brand here with a mix of Japanese heritage and French influences.

Wrapping with a concert by former Fugees frontwoman Lauryn Hill, the event’s underlying message of the positive contribution of foreigners to the culture and economy of a country like France, and the world beyond, came through loud and clear.

Nabil Nayal, who was born in Syria and moved to the U.K. in 1999, also made a vibrant case for cultural cross-pollination. Having been short-listed for the prize in 2015, he was back with a collection that melded sportswear influences with references to Elizabethan dress.

“I’m here to promote Syrian talent as well. I’m here as almost like an ambassador for what people can do over there. There’s been so much negativity placed around the Syrian war and everything that has gone on since the onset of civil war over there.

“I’m here to say, OK, we can make positive changes and show how people can come out of places like a war-torn country and do really positive things with their lives, and hopefully I can influence people in a positive way. I don’t believe that segregating people according to where you’re from is the way forward at all.

“It’s totally wrong, and I think that people need to integrate and share ideas together because I believe in collaboration. I want to be able to collaborate with people who inspire me and also vice versa, and in order to do that, we need to have kind of porous borders in a way, so that we can cross over and share those ideas together,” he said.

Nayal was confident that the fashion industry would lead the way in promoting a more tolerant agenda.

“By its very nature, fashion itself is very progressive and I think that we can lead the way in showing people how things can be done,” he said. “Things like this event, this LVMH Prize, it brings people together. It reminds people that life is really positive, there is creativity out there and we should nurture and harness that and promote it.”