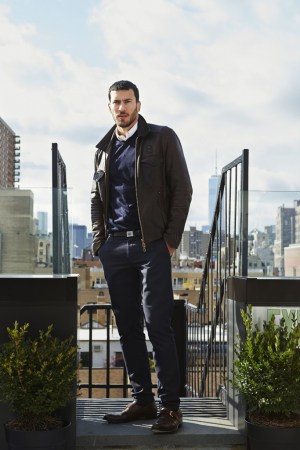 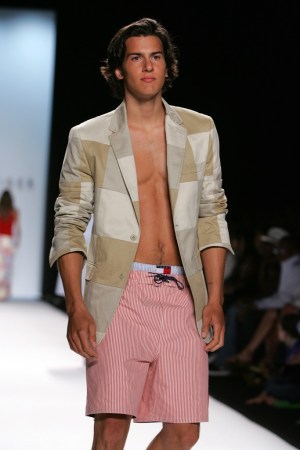 Steven Gold in the spring 2006 runway for Tommy Hilfiger.

Male models don’t have much of a track record in their post-runway careers. For every Channing Tatum, who modeled long before starring in Magic Mike and the Jump Street movies, there are ten guys who end up artist-bartenders, novelty DJs, or bit players on 2 Broke Girls. A couple of exceptions to the rule are Steven Gold, a go-to real-estate broker in New York City, and Armando Cabral, who runs his own shoe line.

This story first appeared in the December 9, 2014 issue of WWD. Subscribe Today.

In his modeling days, Cabral appeared in ads for H&M, Target, and J.Crew, as well as high-end brands. He decided to break with modeling, save for the occasional high-visibility print campaign, about a year ago, and now devotes his time to the namesake footwear company he started in 2009. “If I could be the Dries of footwear, I’d be the happiest man alive,” Cabral says, referring to Belgian designer Dries Van Noten, who has run an independent label for some 30 years.

His work space, a windowless area in a Manhattan commercial building, resembles that of a tech start-up. Cabral, 32, was born in the small African country of Guinea-Bissau and raised in Portugal. His sister, Maria do Céu Cabral, also a model, brought him to his first casting call at a Lisbon agency when he was 16. After moving to London to pursue fashion work while studying at London Metropolitan University, Armando spent a few years in the wilderness. Black models were not in high demand, and he found himself booked mostly for commercial work for black English designer Ozwald Boateng among others.

After signing on with ICM (now Independent Talent), Cabral soon heard the four magic words: Exclusive for Calvin Klein. “That’s where everything started,” he says. “I was probably the only black guy they used for a while. People started coming up to me: ‘Who are you? What’s your name?’” For years he cut a striking profile on the runways, which are mostly white, especially in Europe, working for Louis Vuitton, Dior Homme, and Givenchy.

By 2009, just before the onset of the sneaker craze, he thought he saw an opening for a line of shoes, at mid-range prices, between casual and formal—in other words, the kind he wasn’t able to find in stores. “Sometimes you just want a beautiful, simple shoe that’s not so fashion-runway,” he says.

Working with shoe designer Rucky Zambrano, who had spent time at Hugo Boss, Tod’s, and Salvatore Ferragamo, Cabral settled on three concepts that are manufactured out of Italy’s Marche region: a classic lace-up, a high-end sneaker, and a hybrid. “We were profitable after year one,” he says. For his second season, Cabral landed the influential Dover Street Market in London and the Tokyo-based Beams International. Now, his shoes are in 35 stores, including Bloomingdale’s and the e-commerce site Mr Porter. Last year’s NBA scoring champion, Carmelo Anthony, wears Cabral, and Rihanna has called for samples, he says.

“I deal in very high-end properties,” says Gold, who works for the Town agency. “Every time I sell a property, it’s as if I got that fragrance that I was always trying to get.”

At age 17 he signed with Major Model, which represented Tatum at the time, and  walked for Louis Vuitton, Givenchy, and Salvatore Ferragamo. After five years of print work (during which he was photographed by Steven Meisel and Terry Richardson) and runway shows, he switched to his new occupation. His clients include people he knows from his previous life, including designers Riccardo Tisci and Brian Atwood, as well as photographers Mert Alas and Marcus Piggott, among others.

Walking through a Greenwich Village penthouse listed at $39.8 million (Leonardo DiCaprio owns a unit in the same building), the strapping 29-year-old says, “My bread and butter is around $3 million. But then I have a certain set of clients that are looking for 15 and up.”

As a 16-year-old Jewish kid in Stamford, Conn., he was working as a lifeguard at a swim club called the Italian Center when one of his buddies brought him along to a Manhattan casting call. Gold had no desire to become a model—his knack for numbers suggested a career in finance—but he got offers from several agencies, and ultimately signed with Major. Suddenly, Gold had a modeling career (while the friend who had brought him to the casting struck out). The day after his high school graduation, Gold flew to Paris for his first job, as an exclusive with Louis Vuitton. In a typical season, he walked 10 to 15 shows while making time to study business at New York University.

During a shoot in Arizona in 2005, with photographer Pamela Hanson, not long before he was to graduate from college, his two worlds collided: A recruiter from the investment bank Petsky Prunier called with a job offer. “I’m having so much fun, riding horses in this ranch, and I’m shooting with this beautiful girl, and I said to the guy, ‘Can I think about it?’” Gold recalls. “And he said, ‘What?’”

Gold went into modeling full-time. Three years later, with the work coming a little more slowly, he noticed a real-estate friend of his who “was having fun but making great money.” Gold got his license in 2007 and built a client base around people in fashion. In June, he sold Anne Hathaway’s Manhattan apartment for $4.25 million. And when Olivier Sarkozy, half-brother to the French president (and boyfriend to Mary-Kate Olsen), needed to unload his East Village row house, he went with Gold, who made a deal for $6.4 million.

“I didn’t want to do this job badly enough to just sell studio apartments or rentals to college kids,” Gold says. “If you’re gonna do it, do it big.”