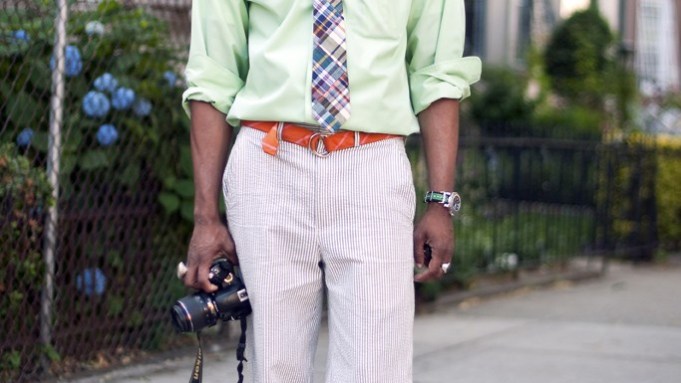 Two self-taught photographers with unlikely backgrounds have lately been making names for themselves in the world of street style.

They are Robert Spangle, a former U.S. Marine whose tour of duty included time in Afghanistan, and Karl-Edwin Guerre, who takes his camera to the streets when he’s not working as an administrator at a New York City hospital.

As creators of popular street-style blogs, they travel the world, documenting the madness of the fashion weeks in New York, London, Paris, and Milan. “If you’re on the last plane from Milan to Paris, it’s all models and street-style photographers,” said Spangle. “It’s a kind of jet-set flying circus.”

Photographers who capture style in the public arena are descendants of Bill Cunningham, who has been capturing what people wear in their everyday rounds, for The New York Times, since 1978. Digital-age gods of the realm include the pioneering Scott Schuman (whose blog is called The Sartorialist), Tommy Ton (Tommy Ton), and Adam Katz Sinding (Le 21ème).

Like others in their small circle, Spangle and Guerre make money at fashion weeks, during which, at the behest of media companies, retailers, or fashion houses, they take photos that capture the latest clothes in the wild, after they have escaped the hothouse environment of the runway. So there they stand, waiting for their stylish prey outside hotels, showrooms, and fashion tents. Their main subjects are models, bloggers, editors, designers, and brand-besotted (or brand-sponsored) athletes, rappers, and actors. The pictures they take bolster their own reputations while also lending fashion cred to their subjects.

And so Guerre and Spangle—neither of whom is all that far removed from mundane or difficult circumstances—find themselves in the position of conferring status on those who have an easy familiarity with la dolce vita.

Robert Spangle joined the Marines after a childhood and adolescence of skateboarding, hiking, and surfing, in Malibu, California. “I was part of a generation of kids who grew up right in the middle of September 11,” he said.

As a recon Marine—part of a special-forces team—he was never in any one place longer than a few weeks. “I got to see a lot of the world and almost every state in America,” he said. His stops included South America, Africa, Afghanistan, and Eastern Europe. The job was reconnaissance and surveillance, which required a camera.

He left the Marines with the rank of sergeant, matriculated at Otis College of Art and Design, in Los Angeles, and soon found himself shooting candids in the streets nearby. “I think I’ve had some issues reintegrating into civilized society,” Spangle said. “I felt apart and separate. Going out with a camera was a way to normalize that outside experience.” His decision to pick up a camera pleased his parents. “They were pretty excited that I was getting away from playing with guns,” he said. He left Otis during his second year and apprenticed as a tailor, on Savile Row.

Describing his work for his blog, Thousand Yard Style, Spangle said, “I’m more narrative, not just documentative.” Each of his lenses is fixed, which means he cannot shoot his subjects from afar. “I don’t mind running,” he said. “I don’t mind sweating and getting a little dirty to get the shot.”

Karl-Edwin Guerre played it cool when we met at a café near the Brooklyn apartment he shares with his wife and two kids. “I’m a guy who carries a camera, who has been known to take some pretty pictures,” he said, playing down the fact that he has shot for Marie Claire, Refinery29, Nordstrom, and GQ Japan. Guerre—pronounced “gear”—had come from his day job at a Manhattan hospital.

He was born in Brooklyn and grew up in Queens. After a few years, his family decamped for Michigan, and then, from ages ten to fifteen, he lived in Haiti, the birthplace of his parents. “I’ve gotten a chance to live in, and experience, the richest country in the Western Hemisphere and the poorest country in the Western Hemisphere,” he said. He attended Miami Dade College for a while but lost interest, thanks to a stupid test question in a sociology class: True or false: Is gentrification good? “You can’t answer that true or false!” he said.

He started taking street-style photographs in 2008 and launched his Web site, Guerreisms, the same year, when such sites were not so common.

In the scrum of fashion weeks, he stays on the periphery, and his discomfort manifests itself in a telephoto style. He doesn’t care about faces (“I couldn’t care less,” he said), and his backgrounds are often a beautiful blur.

His driving idea is to focus on subjects who have a great look, rather than those who mindlessly follow the latest thing. In other words, he prefers style to fashion. “Fashion is consumption,” Guerre said. “Fashion is buying the trends. It’s the latest. That’s all fashion is.” Style, as he sees it, is something greater: “Style is knowing what to do with the product, knowing what product not to touch. Style has to match your personality.”