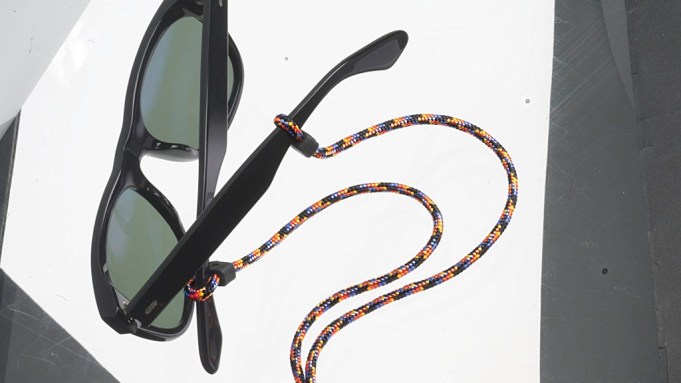 An accessory for your accessory.

It enhances your sunglasses. It’s a thin rope. It’s not leather. It’s not a chain. It’s about your athleticism. It feels like a bracelet, except it’s on your head. It’s manly. I can’t explain it. I just need to have one. They come in different colors. I like the ones from EK USA.

BEADED SHOE
My obsession with beading led me to this one. It’s made by French brand Twins For Peace, which invests in education and health care in the developing world, which is nice, but I care about it only because they make a gorgeous shoe.

DENNIS HOPPER SHOW
Through October 19, at London’s Royal Academy of Arts, you can see The Lost Album, an exhibition of photographs taken by this modern-day Renaissance man. I would love to be his friend. He had a great eye, and he knew the most influential people of his generation. Tina Turner. Paul Newman. John Wayne.

GAY WEDDINGS
Gay weddings are hot because they are new. No one has the need to come up with elaborate themes to make them exciting; the fact of the gay wedding is exciting enough. And there’s no formula yet—except that everyone looks super chic and every straight girl who goes to one is sure to get laid, don’t ask me why.

THE BELTED LOOK: (NO FATTIES, PLEASE)
This fall, you need a belted jacket or topcoat. There are great ones from Berluti, Brioni, Salvatore Ferragamo, N. Hoolywood, and Haider Ackermann. Put it on, and you’ll look like a French spy on a mission. Give me a belt, and I’ll show you a new you. But remember, you need a tight core, or you’ll look like the Michelin Man. And no one wants that.

¡HOLA!  IN THE BATHTUB
Long before People or Hello!, there was ¡Hola!, the original magazine of gossip and style. I was obsessed with it when I was 7, 8, 9, 10 years old, and I still read it every week, usually in the bathtub. I know it sounds like Miss Lonelyhearts behavior, but for once I don’t really care what people think.

CATCH THAT NUN!
It is a proven fact that anything a nun does is totally hysterical. Kids in Europe used to go out with cameras and try to catch a sister in an everyday situation, like driving a Vespa or eating an ice-cream cone. With iPhones everywhere, the game is back and more competitive than ever. Smoking nun wins.

THE RETURN OF PANINARO
The Paninaro was a big youth scene that started in Milan in the ’80s. The look was Timberland boots, Armani jeans, El Charro belts, and bomber jackets. A 1986 Italian movie captured it all: I Will Marry Simon Le Bon. I am totally feeling a comeback. #wildboys

LULU
My cat Lulu has been acting up. She’s distant when I come home from my trips, and then she gets super emotional for three days. Lulu, we are going to a cat psychic. #supermodellife

WHISKEY
My trainer is a psycho, but I do what he says. Usually. He only allows me to have tequila (white liquor, good; brown liquor, bad), but I am sick of drinking from a cactus plant. All I want is to have a glass of whiskey by the fire. There is only one solution. I will lie to my trainer—and to my food journal.