A scion of a founding Hollywood?familywins big as the sexed-up president in ABC’s Scandal. 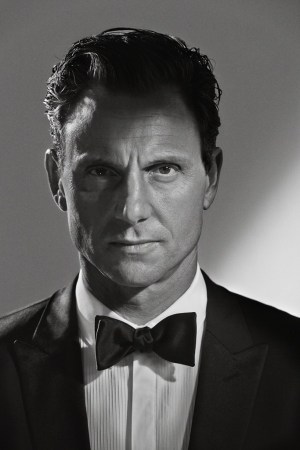 Women looked up from laptops to gaze at Tony Goldwyn as he glided away from the counter of a Beverly Hills coffee shop with his cake and cappuccino. He was wearing a tight T-shirt, snug corduroys, and sneakers. He looked less like the heavy-drinking, philandering, murdering President Fitzgerald Grant III, whom he plays on ABC’s hit series Scandal, than a nicely muscled personal trainer.

He sat down across from me at a corner table. His straight-backed posture gave him an air of alpha-male authority.

The third season of Scandal had just started shooting, but he was not needed on set. He planned to use his time away to work on a series he has developed, The Divide. It is the first scripted program slated for the AMC Network’s WE channel. Goldwyn, the 53-year-old scion of one of Hollywood’s founding families, had a budget meeting to attend later that day and fifteen scripts to comb through with one of his partners on the project, screenwriter Richard LaGravenese (The Fisher King, Behind the Candelabra).

Goldwyn signed a six-year contract with Scandal, but it’s not in his nature to put all his eggs in one basket. “This is an entrepreneurial business,” he said. “In order to be creatively satisfied and financially secure, you need to be a self-starter. I’m always assuming nothing’s going to work out and I have to roll up my sleeves.”

The frothy Scandal has definitely worked out for Goldwyn, as evidenced by the reaction he got from Washington insiders at the 2013 White House Correspondents’ Dinner. “I was shocked,” he said. “People were so into Scandal. I guess it’s a release for people who work in that world day in and day out.”

At a Washington brunch, he met Gene Sperling, director of the National Economic Council under President Barack Obama. “He goes, ‘Scandal!’ He wanted to talk about Scandal. So here I am, talking to Gene Sperling about my television show, and he’s dealing with the big issues.”

Michelle Obama, her staff, and others in the Obama administration are Scandal fans. Goldwyn heard that from White House adviser Valerie Jarrett, as well as from his costar Kerry Washington, who plays the crisis-management expert Olivia Pope, the brainy bombshell who has been having an on-again, off-again affair with Fitz (and whose election she helped fix). The sex scenes between the two of them, it should be mentioned, are sizzling, especially for network television. So what happens if Goldwyn finds himself aroused on set?

“It’s not really about that,” he said. Pause. “It’s weird. Our sex scenes are really intense. But so is our relationship. For Kerry and me, it’s no different than doing an emotional scene. It’s just more awkward, almost in the anticipation of it. Once we start doing it, we commit. You’re lost in the scene.”

Safe to say he and Ms. Washington are physically attracted to each other, though?

Goldwyn has been married to production designer Jane Musky since 1987. They have lived in Connecticut for seventeen years and have two daughters in college. When they see those Scandal-ous sex scenes, Goldwyn’s daughters like to needle him with rude text messages. Is his wife OK with it, though? “My wife’s cool,” Goldwyn said. “She’s in the business, I’ve been doing this a long time. Jane’s thrilled for the success of the show, and we’re all professionals, you know.”

Does he get hit on by women these days?

“This is embarrassing to say, but I was going through airport security, and the TSA lady goes, ‘Do you have any idea that you are the sexiest man in America?’ I said, ‘Well, thank you!’ She said, ‘No, no, no! I’m not complimenting you. You need to understand this. You need to understand what you are to American women.’ I was like, ‘Wow! Thank you!’ So I have gotten a few of those. But I get the feeling that women know I’m married. I wouldn’t say that I get propositioned. I get appreciated, which is nice.”

Of the 4.3 million Scandal-related tweets that appeared on Twitter during season two, a number were X-rated messages directed at Goldwyn. “I can’t repeat them,” he said. “But it’s women describing what they’d like to do to my body. Most of them are not like that. Honestly, people are pretty chill and respectful on Twitter.”

He experienced a burst of fame in 1990, when he played the villain in the supernatural romance Ghost: Carl Bruner’s nefarious deeds lead to the death of Sam Wheat (Patrick Swayze), who is murdered in front of his wife, Molly (Demi Moore). Bruner then hits on the grieving widow. (“You have to live for now, for today,” the scoundrel says, before leaning in for a kiss.) Ghost was huge, eventually grossing a half-billion dollars. “I found it very disorienting, suddenly being recognized,” he said.

His performance was so memorable that he was sometimes met with hostility. While doing a play in New York during Ghost’s theatrical run, he went into an empty restaurant, only to find that a waitress would not seat him. “I finally said, ‘Excuse me, can I sit down?’ And she said, ‘Yes,’ very gruff. Then she wouldn’t bring me the menu. I had to say, ‘Excuse me, hello!’ I finally get my dinner, and she’s looking daggers at me. Finally, she comes over and says, ‘I’m sorry. Are you an actor? You’re in that movie, right? I knew I hated you, but I couldn’t figure out where from. I didn’t know if you were someone I’d slept with.’ ” He adds that fame is different the second time around: “I’m able to relax and enjoy it.”

Before the interview, I watched a remarkable American Masters documentary about his grandfather, Goldwyn: The Man and His Movies. He was born Schmuel Gelbfisz and left Poland, on foot, at 15. He ended up in a ghetto in England, did manual labor in Birmingham, sold sponges, and scrounged up enough to book passage to Nova Scotia. He became an expert glove-maker in upstate New York, made a small fortune as a traveling glove salesman, and, at 34, coproduced the first feature-length motion picture made in Hollywood, The Squaw Man. He went on to make another hundred.

He finally got real respect in the business when a masterpiece he produced, William Wyler’s The Best Years of Our Lives, swept the 1947 Academy Awards.

“He came home and cried,” Goldwyn said. “He came home, and he had two Oscars in his hands, and he sat on the coffee table and wept.”

Tony Goldwyn’s father, Samuel Goldwyn Jr., produced his first movie (Man With the Gun) in 1955 and has made twenty-five since, including Mystic Pizza and Master and Commander: The Far Side of the World. Tony’s brother John is also a major player, having served as Paramount Pictures’ head of production from 1991 to 2004. Recently, he formed a production company with Lorne Michaels. Lately, he has worked with his father, producing Ben Stiller’s The Secret Life of Walter Mitty, which comes out this Christmas. (Samuel Goldwyn produced the Danny Kaye version in 1947.)

As a kid in Los Angeles, Tony had no idea what he wanted to do. His mother, a painter and a musician, hated the Hollywood life, and his father never let the kids visit movie sets. “My parents were obsessed with us being normal kids, so I never knew movie stars,” he said. “They didn’t want us to be Hollywood brats. And yet, on the weekends we’d go to my grandparents’ house, and they lived a very formal life, a life of another era.”

There he met the directors George Cukor, Billy Wilder, and William Wyler. He also had a strong connection with his grandfather.

“I was almost 14 when he died. He was very old—he was 94—when he died, but we were really close, yeah. I think I share certain aesthetic sensibilities with him. I think I’ve inherited a kind of…willfulness, a kind of quiet willfulness that I’ll just hang in there with something until it happens. But he was much more volatile than I am, much tougher than me, more of a visionary than me. This is a guy who walked from Poland and made his way to America on foot, with one suit of clothing, at age 15. He was a tough son of a bitch. And the most charming man ever. But he had trouble getting along with people—he was irascible. I’m more diplomatic.”

“Everyone loved Tony,” John Goldwyn said. “Even when he got into trouble, he would look at you and say, ‘Did I do something wrong?’ And you would start to laugh. He always made friends very easily. And he was handsome. Girls threw themselves at him. He has a genuine talent for people, understands how to talk to people, and, more important, how to listen to them. There is nobody in my family, including myself, who has Tony’s charm. I’m convinced he was a foundling child.”

Tony went to an all-boys boarding school in Colorado, where, in ninth grade, he auditioned for a production of Inherit the Wind. He was hooked, although he didn’t get the part. “That was it,” he said. “I immediately knew.” He became “very, very focused,” and his father was impressed. After seeing him onstage, he told young Tony, “That’s the only time I’ve ever seen you concentrate.”

He left Los Angeles to attend Hamilton College, in upstate New York; earned a BFA at Brandeis University; and did a stint at the London Academy of Music and Dramatic Art. But his time at the Williamstown Theatre, in Massachusetts, is what gave him confidence as an actor. It’s also where he met and fell in love with his wife (“a Jersey girl”).

After a shaky start, he got steady work, making himself a TV fixture from the eighties onward (Designing Women, L.A. Law, Murphy Brown, Dexter, The L Word, Law & Order: Criminal Intent, The Good Wife). He also did character work in numerous movies (Jason Lives: Friday the 13th Part VI, Kuffs, The Pelican Brief, Bounce, The Last Samurai, Nixon, The Mechanic, among others). Along the way, he started directing, helming episodes of The L Word, Law & Order, Private Practice, Dexter, Damages, and Grey’s Anatomy, the hit medical soap opera created by Shonda Rhimes, who is the brains behind Scandal (of which Goldwyn has also directed an episode). He also directed the 2010 film Conviction (“It delivers,” Roger Ebert wrote in his review).

One last question: What would Samuel Goldwyn, an American patriot, make of his playing the president?
“I think he’d be really thrilled and proud at that, because he would think it had stature, and he would be excited about the career I’ve forged for myself. Because my grandfather was a survivor. He overcame extraordinary adversity. He understood that this is a business of surviving and hanging in there. It’s sort of what we were talking about earlier, about being at this stage of my life, with this opportunity happening. It’s a testament to working your ass off all the time. And then, every once in a while, something hits”—Goldwyn smacked the table—“and you reap the benefits. But not if you don’t hang in there.”