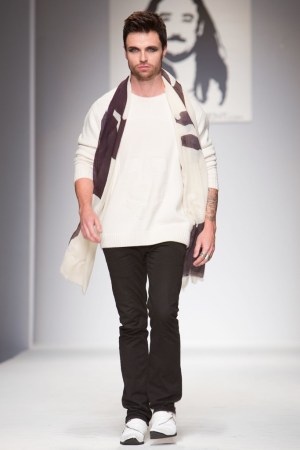 M the Movement: Michael Herrera’s streetwear line looked edgy yet approachable. There were graphic T-shirts (a screen print of Herrera’s own face was a common motif) throughout, mixed in with denim and leather for men and women. A cute women’s look was a simple white bow-tie top worn with black tailored pants. As for the black leather skirts, they came short and pleated for her and longer and kiltlike for him.

This story first appeared in the March 14, 2014 issue of WWD. Subscribe Today.