The rapper has created a colorful line of golf essentials designed to dress up the course.

There’s usually a silver lining to everything if you look hard enough. And for Macklemore, it’s the fact that the pandemic has given him more time to work on his golf game.

The Grammy Award-winning rapper and musician has always been athletic, playing baseball, basketball, soccer and other sports growing up in Seattle. But it wasn’t until two years ago that he took up golf, and now he’s hopelessly hooked.

That obsession has led him to create his own collection of golf apparel — Bogey Boys — that will launch online today.

“I grew up playing sports, but not golf,” he said from Pebble Beach in California, where he’d just finished nine holes. “There was a little par three near where I lived in Seattle and I’d go out every once in a while, but I never played 18 holes or hit a driver.”

That changed in 2018. “One day after Thanksgiving, I was peer-pressured into going out and playing golf. My first tee shot I hit directly into a house.” But he persevered and later in the round, he used a five iron to hit out of a sand trap, “and I hit it pure. That feeling stuck with me and now I’m completely addicted.”

Although Macklemore still considers himself a beginner with a lot to learn, he and teammate Alfonso Ribeiro, an actor best known for playing Carlton Banks on “The Fresh Prince of Bel-Air,” won the Celebrity Challenge before the AT&T Pebble Beach Pro-Am tournament earlier this month. He even beat Bill Murray — a skilled golfer with an eight handicap — who was teamed with NFL player Larry Fitzgerald, as well as former Miss America Kira K. Dixon and actress Kathryn Newton.

“My team won,” Macklemore stressed. “Alfonso carried us, but I did hit a bunker shot on 18 that set him up for the winning par putt. So it was a team effort.”

That may be true, but Macklemore’s three or more rounds a week have helped him achieve an 11 handicap. Even so, for the rapper, that’s not good enough. “I need to take more lessons,” he admitted.

In addition to improving his game, Macklemore hopes to inject a little color and life into golf fashion as well with Bogey Boys. “The game is pretty stale in terms of clothing,” he said. When he first took it up and visited pro shops to stock up, he said he was “very underwhelmed with the options” that centered around black, navy or gray polos and light-colored khaki pants. 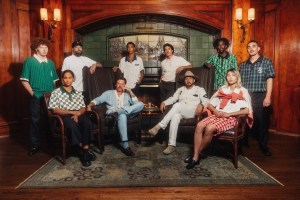 “There was no flair or originality and no opportunity to put together an outfit with any originality.”

This is not Macklemore’s first foray in fashion — he was an ambassador for Columbia Sportswear in 2017 and filmed a video for the brand hiking Mount Rainier — but this is his first attempt at creating his own line. So he partnered with Ceremony of Roses, a branding and management firm in Los Angeles, and worked with its design team to create the launch collection.

He acknowledged that while he may be a master at music, jumping into the fashion business was a whole new world. “It’s not easy, and this is not a light undertaking,” he said. The collection is all cut and sewn, which he found out “takes a really long time” to execute properly. “It’s not just buying Dockers, taking off the name and putting a Bogey Boys logo on it.”

But ultimately, Macklemore said it was worth the effort. “I’m super excited with the way it turned out,” he said. “The materials are great, the design is great and it feels great. If I play golf and I’m trash at it, at least I’ll be the prettiest guy on the course.”

Bogey Boys is respectful of the tradition of the game and its legacy of plaid pants, tartan windbreakers and tweed driving hats. His line pushes the envelope, offering polos with fun, colorful graphics, pants in eye-catching plaids and bright solids, updated outerwear, hats, socks and even the requisite golf towel. As he writes: “If I’m gonna be outside for five hours, better believe I’m going to shine. I want my pants to show just enough sock, my shirts to pop in the right way and my jackets to hang right.” 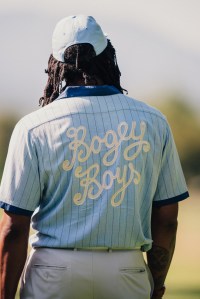 Retail prices for the collection will range from $35 for hats and $80 for polos to $120 for cardigans and $150 for jackets. It will be sold on the Bogey Boys’ e-commerce site.

Beyond creating Bogey Boys, Macklemore said he’s spent the past year perfecting his game and parenting his two daughters. “I’m just trying to stay balanced in this crazy time,” he said. Since no one knows when tours will start again, he’s focused more on creating new music. “I had a lot of momentum going, and was finishing the last quarter of an album, but the pandemic put everything on pause. But I’m still trying to be creative.”