Gray champions the nonprofit My Good, which supports families who have lost loved ones at the hands of police.

While police brutality is very much in the public vernacular, musician Macy Gray has been working for some time to help families who have lost loved ones at the hands of law enforcement — a cohort that’s increasing by the day.

Through the nonprofit My Good, the Grammy winner has been supporting families with aid, and the organization has joined forces with French footwear brand Twins for Peace to introduce a limited-edition collection of sneakers that Gray has codesigned, proceeds from which will go toward helping even more families.

The first three pairs will be available on the Twins for Peace site starting today. A percentage of each pair of sneakers that are sold will benefit My Good to help families who are dealing with the aftermath of the loss of loved ones. 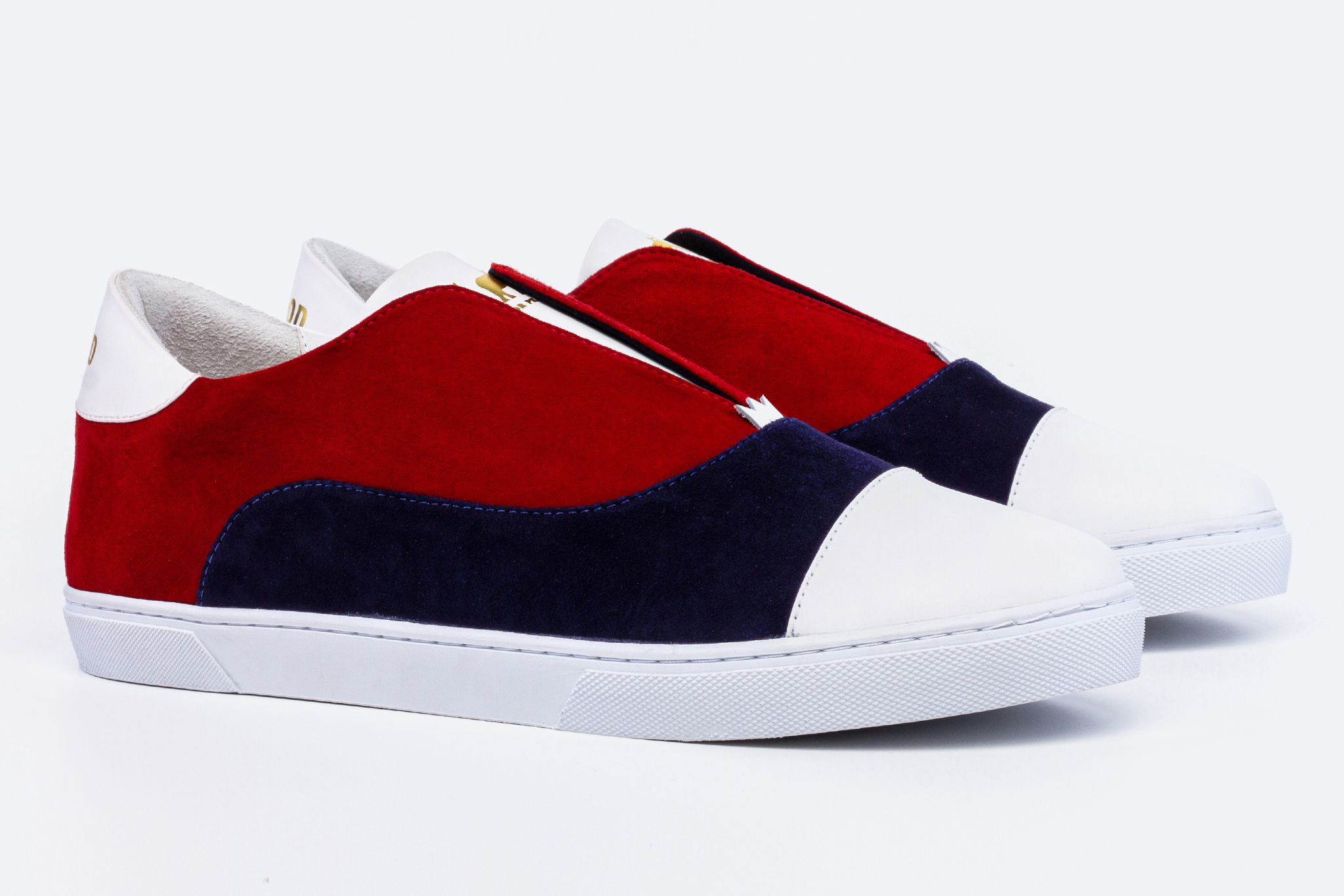 In a phone interview last week, Gray, My Good’s co-executive directors Grace Blake and Charyn Harris and Twins for Peace’s chairman Nana Baffour discussed police brutality, the need to broaden a conversation around it and how families start to pick up the pieces after such life-altering suffering. Before Baffour joined the call, the trio discussed the ongoing problem of police shootings including the fatal one of 16-year-old Ma’Khia Bryant in Columbus last week.

There were 1,021 fatal police shootings in 2020 compared to 999 in 2019, according to Statista. The rate of fatal police shootings among Black Americans was much higher than any other ethnicity last year. Of the 213 civilians who were fatally shot by police in the first three months of this year, 30 individuals were Black, Statista noted.

”Police shootings — as much as we talk about them — some people don’t really care. And that’s the reality. Through the connection with Twins for Peace and through other efforts that My Good is setting up, the group is trying to engage more people,” Gray said. “…just liking our shoes, whether they care or not, helps a family. They just help someone heal. That’s why we have partnered with Nana.”

For the My Good collaboration, 600 units of the responsibly made sneakers will be available.

Determining which families to help can be challenging, since some are still dealing with issues 20 years after the loss of their loved ones, the My Good team said. The most recent cases take priority, though, and situations vary from person to person. Helping a mother in Chicago, who had been living in her car, to be taken in by relatives is one of the many ways My Good is pitching in.

Gray said some of her new music addresses the issue of aiding families, too.

Her single “Thinking of You” dropped last week, though her next album “Reset” does not yet have a release date. As for how music can bridge the divide and help people come to a peaceful understanding, Gray said, “Music is the one thing that really does bring people together. You know no one cared what color Stevie Wonder was. It is the one medium where there is no race. It doesn’t matter what color or what your background is. Ariana Grande makes you feel something…that is something that we all have in common. To touch the heart and say things on a higher level from the soul, that is the one place, where race and political views don’t matter. You just feel better. You just want to sing along. You just want to sing karaoke.”

When it comes to what’s needed to finally curb police killings, she said, “If I had the answer to that, I would have fixed the world already. That is such a loaded question and it’s an answer that’s been needed for years and years and years. This isn’t anything new that we’re talking about.

“People have to let go of their hate and their hang-ups and discrimination. Start at the heart always. You have to let go of all your little notions and your fears about other nations, and how you treat women and men. It really starts with yourself…it’s really from the people. It always has been.”

My Good is trying to move the conversation forward. As Blake noted, “One of the things that we’re looking to do, and we have been very interested in is [to have] a platform for the community and law enforcement to have these conversations that we hope will start to change or at least provide an opportunity to be able to hear one another. That’s something that we’ve been working on. This would take the form of a town hall or a meeting.”

The organizations are taking their concerns straight to those in blue, too.

“We’re beginning to enter a conversation with Police Chief Bill Scott, who oversees the San Francisco Police Department. He is an officer, who is highly regarded in terms of how he has commandeered the structure of the San Francisco Police Department,” Harris said. “He has really been a pioneer in making sure that his officers follow certain protocols. He’s become almost a model for a lot of other police departments on how to run a department. He has really looked at a lot of these instances and has had great insights and great input, in terms of how a lot of issues trickle down. There are issues in different departments as we all know now.…There are of course, great police officers out there. But we’re hearing of the ones that are not so great unfortunately.” (Last week Scott invited social justice activist Lisa McNair to speak to the San Francisco Police Department’s command staff. Her sister was killed in a 1963 bombing caused by the Ku Klux Klan.)

Next month Scott will participate in a town hall event about ”ghost guns,” homemade weapons devoid of serial numbers or other identifiable markers, that is being organized by the nonprofit Brady: United Against Gun Violence. In early June he will speak at the Alameda County Bar Association’s presentation on community policing, a San Francisco Police Department spokesman said. An autopsy is being conducted in Alameda for Mario Arnenales Gonzalez, who died after being restrained on the ground by local police officers last week.

Continuing, Harris added, “The goal is really to be able to start a dialogue to see how we can start a dialogue, how we can work together, how we can be in the middle, and looking at the changes that are going to be happening in policing and reform.…We’re about the families. We’re about when the media dims, the lights go off and [the media] moves on to the next hashtag, the next family. What happens with these families? How are their needs being met? How can they go from surviving to thriving and being healthy?”

Police brutality and police reform have been increasingly discussed following the conviction earlier this month of former Minneapolis police officer Derek Chauvin, for the murder and manslaughter of George Floyd.

As for how consumers can help end police brutality, Baffour said they can do so by being crucially aware about how they spend their money and by supporting organizations and companies that are speaking out against police violence in communities of color. Consumers should research brands before supporting them with their spending power to ensure those brands are in line with their own values. He also suggested that people get active in their local communities and vote for the right mayors, district attorneys and other officials who share their views.

The media, according to Gray, has overlooked the fact that all kinds of people are at times nervous about driving (anxious about being pulled over by the police without just cause.) Given that, she urged the need to get involved, because it could happen to anyone.

“A lot of people believe they don’t have to have these conversations,” she said. “They don’t have to be nervous, when they drive. But we have a huge policing problem. We have to really address policing. It is really just bringing all of us down.”

And it’s affecting the mental health of the families who survive the loss.

“When everything goes away, these families are left to their own devices,” Harris said. “The residual effect is on not only the families, but the communities. It is really profound and there is a lot of work that has to be done to make sure they’re OK [and not] re-triggered, re-traumatized. Some families need not only mental health services but almost like a life coach. While they’re fighting for their families, they’re trying to hold their homes together. They’re trying to take care of their children and sometimes their nieces or nephew who have lost a parent. They’re trying to make sure that they can provide or start new businesses but they need direction…[that’s ] why this venture is so important.”