Macy's East is making moves to elevate its fashion profile, the latest being the chain's first full-fledged fashion preview at the Herald Square flagship. 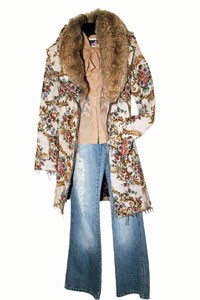 NEW YORK — Macy’s East is trying to make some noise to elevate its fashion profile.

The retailer’s image has often been muddled amid its mega sales promotions and consolidation activities, and even overshadowed by its sister divisions in the Federated Department Stores stable, Macy’s West and Bloomingdale’s.

During the last 12 months, Macy’s has rolled out a national TV and print advertising campaign and rebuilt its fashion office, which was dissolved eight years ago. The office helps merchants and marketing and visual executives stay on top of the trends and track the styles and items that are selling best, and it shapes the mix on the store’s selling floors and in the catalogues.

Macy’s East is also launching some new fashion catalogues this fall, including one for cold weather accessories and another for contemporary sportswear, focusing on certain items and staging an aggressive denim campaign. The campaign aims to tell the world that Macy’s sells more than just Levi’s, and features brands selling for as much as $250. While Macy’s does a big business with moderate denim lines such as Mudd, the company will promote more its “status” denim assortment with jeans like Earl; Paper, Denim and Cloth; Streets Ahead, and Frankie B. By comparison, Barneys New York goes as high as $300 in what it calls its “premium denim” assortment.

“We want to create a new level of awareness, for sure,” said Nicole Fischelis, vice president and fashion director for ready-to-wear, who joined Macy’s East last November after working at Saks Fifth Avenue and, more recently, at Salvatore Ferragamo.

“Sometimes, ‘sale’ overshadows a fashion message,” said Martine Reardon, the store’s executive vice president of marketing and sales promotion. “My role and the fashion office’s role is to get a balance out there, and that involves balancing the promotional sales messaging with regular price. We always knew we had a good story. Now we are making an effort to tell it” more effectively.

Another Macy’s official put it succinctly: “We believe we do not get enough editorial exposure in magazines.”

One reason is that Macy’s, like most other department stores, carries a broad range of fashion and home goods and caters to families and a variety of income levels in most states. That makes it tougher to project a sharp fashion image because of the many different customer groups, while specialty stores focus on a specific demographic.

In addition, Macy’s has placed a priority on making the numbers rather than making an image, and churning volume rather than turning up fashion. Macy’s went bankrupt in 1992, got taken over by Federated in 1994, and underwent a series of consolidations as Federated substituted its regional nameplates with the Macy’s name. As of March, all Federated stores were operating under the Macy’s name, except for Bloomingdale’s.

While Macy’s considers itself “America’s department store,” it won’t be truly national until after Federated completes its $17 billion acquisition of May Department Stores and converts the May nameplates to Macy’s in most locations. The May acquisition will give Macy’s the Midwest presence it has lacked, as well as more penetration in other regions of the country.

“We know pretty well who our customer is,” Fischelis said. “We see it as important to get a new awareness of Macy’s being a fashion store.”

She described her mission as “translating the spirit of the runway into reality.”

Among the key trends Fischelis cited for fall are tweeds, British influences, military looks, furs, velvet, men’s-wear-inspired fabrications, pinstripes and black creeping back after several seasons of colorful assortments. The company will also highlight for fall some specific classifications, including cashmere, which is an important component of Macy’s Charter Club private brand.

Among the designer labels Fischelis highlighted for fall are Lauren Ralph Lauren, Anne Klein, Calvin Klein, Via Spiga, Buffalo and the private brands INC and Alfani. Contemporary and bridge designers such as Vivian Tam, Ellen Tracy, Laundry, Anna Sui, Poleci, Streets Ahead, BCBG, Buffalo and Ben Sherman are in Herald Square on the second floor, and in a few select Macy’s East doors as well.

It’s been challenging for Macy’s and its Herald Square flagship to elevate the retailer’s image, though executives for years have pressured suppliers to sell them their higher-priced and more contemporary collections. In the last few years, Macy’s has moved out of a lot of the moderate business, relaxed some of its aggressive price promoting and couponing and stepped up fashion advertising. The division has also created a competitive junior department and a second-floor contemporary sportswear department, among other steps. Men’s is considered further advanced because of a higher level of cooperation from vendors.

“Macy’s East is a very fashionable store,” said Hal Kahn, the former chairman and chief executive officer of the store. “It sells a lot of urban and contemporary merchandise. We always sold fashion at Macy’s. We just didn’t have enough contemporary, modern fashion.

“The one major thing that is really going to turn it around is for the vendor community to be more supportive of Macy’s, particularly at Herald Square and other A locations,” such as the branches in the Bridgewater Commons mall in New Jersey and the Roosevelt Field mall on Long Island.

“What really has to be done is that Macy’s nationally has to unite and say, ‘If you believe in Macy’s name, you should be in Macy’s Herald Square, the flagship of Macy’s,'” Kahn said. “There are a lot of things that Macy’s East has to do, and they are working on it, but it would nice if other Federated principals are supportive of Macy’s obtaining more contemporary resources. A lot of manufacturers feel that if they sell Macy’s East they are hurting their image, but Macy’s and the manufacturers can overcome this.”

Macy’s West, based in San Francisco, is considered more fashionable. It gained its edge in the Nineties after it consolidated Bullock’s and captured a higher range of merchandise.

“I believe Federated has a very specific vision that will elevate Macy’s appropriately for a department store that has an outreach to different economic segments and different lifestyles,” said Arnold Aronson, managing director of retail strategies at Kurt Salmon Associates. “Certainly, Macy’s will elevate their trajectory from both a lifestyle and fashion point of view. It’s part of Federated’s emphasis on differentiating from the competition and emphasizing exclusives. They have changed significantly the promotional tenor of the store. It’s not as shrill.”