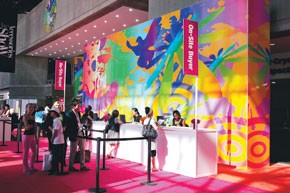 NEW YORK — After Coterie made an 11th-hour announcement pushing its February dates up two weeks, the other New York trade shows were left scrambling to find available dates and venues — with many still undecided at the end of November.

ENK International, which runs Fashion Coterie, moved the contemporary New York trade show to Feb. 10 to 12, about two weeks earlier than usual. Although the new dates pushed against Project Las Vegas and other trade shows, ENK wanted to move the biggest New York trade show to after New York Fashion Week and before the Paris and Milan collections, to better accommodate international buyers, according to Elyse Kroll, founder and chief executive officer of ENK.

Held at the Show Piers and the Jacob K. Javits Convention Center here, the event hosts an estimated 1,200 exhibitors and about 18,000 buyers. It’s New York’s biggest show — and the one to which other trade shows anchor themselves to consolidate travel time for buyers.

Designers & Agents and Train and Platform 2 poised themselves on Feb. 9 to 11, to follow New York Fashion Week and precede Coterie, though only by a day, as opposed to the several-day window many shows usually prefer. The Vegas shows, including MAGIC and Project, immediately follow Coterie on Feb. 12 to 15 and Feb. 13 to 15, respectively. Project pushed back its show a day to reduce overlap.

But both Moda Manhattan and Nouveau Collective decided to pull out of the February market altogether, instead positioning themselves independently on March 2 to 4.

Moda will be at the Javits Center in New York, in addition to hosting its first February Las Vegas show Feb. 13 to 15.

“Our team has spent hundreds of hours on the phone talking both to exhibitors and prospective buyers, trying to decide what to do after Coterie moved, and they really prefer the early March date,” said Britton Jones, president and ceo of Business Journals Inc., which owns Moda. “The dates that ENK and others have chosen are really too early in the season. Exhibitors feel it’s always been difficult to get their samples ready, and retailers are really not excited about being forced to buy so early.”

Moda had originally been scheduled for Feb. 17 to 19 at the Metropolitan Pavilion and the Altman Building — coinciding with Coterie’s anticipated dates. Jones predicts retail attendance might suffer because buyers might not return to New York after having been to Coterie in February, but he thinks he could pick up buyers who were hesitant to order a month earlier.

“Having a market in the second week of February is way too soon,” said Joanne Feinstein, producer of Nouveau Collective, which will be held Jan. 6 to 8 in the New Yorker Hotel and then in March in a venue still to be decided. “Given the economic environment in our country, it’s crazy to expect buyers to book that far out. It’s a half-baked event if the designers’ samples aren’t ready and the retailers’ mind-sets aren’t prepared, and it affects the other shows like us because we need to be by the big show. It’s important for all of us to be at the same time, but it’s frustrating for us not to be efficient.”

Nouveau Collective consistently has about the same square footage and number of designers (350), but for January will add approximately 30 new accessories lines, a 20 percent increase in the category. “Accessories are becoming really important with the dress,” Feinstein said. “We always integrate clothes and accessories together like at a better specialty store.”

Designers & Agents moved its dates to Feb. 9 to 11 to wedge between fashion week and Coterie. But this year the niche show only has one nonoverlapping day, as opposed to being free of overlap as it usually is. D&A again will be held at the Starrett-Lehigh Building and the Chelsea Art Museum.

Known as a trade show offering interesting pieces from European designers, Train and its sidekick Platform 2 will also share the Feb. 9 to 11 dates. Though still at Terminal Stores on 11th Avenue, the show is reconfiguring the space to offer 40,000 square feet — more than 30 percent growth — for the 150 exhibitors.

As Platform 2 enters its fourth season, the younger show will be in a new location in the space, use new booths and have a new sector for “young creatives,” according to Jean-Pierre Mocho, president of Prêt à Porter Paris, the French parent show that organizes Train and Platform 2. “This year, our shows will have more fashion, more creation, more luxury and more accessories,” Mocho said. “But they will be sellable business collections.”

Another trend at shows will be the increasing prevalence of interactive Web sites. Nouveau Collective is launching a site, which will feature “representative looks from each designer and links to their Web sites in a nonintimidating delivery format that isn’t too technical,” Feinstein said. For January and February, the site will be available after the shows for retailers who couldn’t attend, but by the end of the year, Feinstein hopes it will be available before the show to help buyers plan which exhibitors to visit.

“Time is everybody’s most precious commodity,” said Jones of Business Journals Inc., which owns Moda Manhattan, FAME and AccessoriesTheShow. “We’ve always had a search feature, but we are making it much easier to use.”

The Jan. 6 to 8 Manhattan shows will be held at Javits, half of which will house the 1,500 total exhibitors in the three shows. The shows have maxed out their space and will be forced to find more efficient uses of floor area, according to Jones. There, FAME is “getting a whole new look,” according to the show’s planners. Young contemporary and junior lines will make up 80 percent of the show, with young contemporary up 83 percent to 60 lines and junior collections up 14 percent with 30 new lines.

Also new at the shows will be a “fashion case,” a travel case that looks like an oversize cosmetics case and is filled with items from the show floor. The dining will also offer perks: Jose Cuervo will be sponsoring margaritas, TV chef Sandra Lee will entertain and there will be more healthy options “because we know how hard it is to eat on the road,” Jones said.