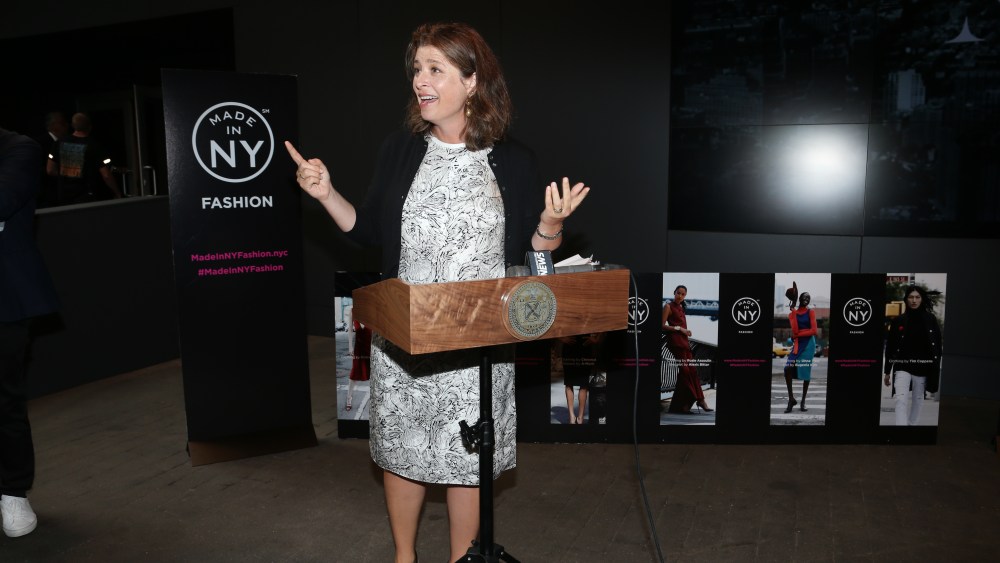 NEW YORK — Thursday morning’s rain drove the Made in NY event indoors, but that didn’t dampen supporters’ enthusiasm for the future of local manufacturing.

Stemming from the $15 million initiative New York City Mayor Bill de Blasio pledged in February, city officials unveiled a $5 million Made in NY marketing campaign at Moynihan Station. Ads featuring designs by Public School, Prabal Gurung, Rosie Assoulin and others are being splashed on billboards, 600 taxi tops, 75 buses, ferry terminals and print publications. That was among the efforts that Deputy Mayor for Housing and Economic Development Alicia Glen noted as examples of how the New York City Economic Development Corporation is fostering local manufacturing. Attendees at the WME/IMG-hosted event also learned about a Made in NY certification program, a Made in NY pop-up shop and next month’s inaugural Made in NY awards ceremony.

Wearing a New York City-made Maiyet dress and Miriam Haskell earrings, Glen said there are more than 900 fashion companies here. “I want to make sure that New Yorkers can wear Made in NY every single day. All of us should have that. It’s not just that we want everybody to look good or to wear our pride on our sleeves. This really matters — this industry is fundamental to the city’s economy. It employs close to 200,000; that’s 6 percent of our entire work force,” she said.

The manufacturing, retail and design companies throughout the five boroughs encompass an enormous ecosystem, she said. “And the city’s more than 500 runway shows [not including the men’s ones held in July], generate more than $900 million in revenue. Thank you to the industry for that. It’s keeping the lights on and a lot more.”

Noting the city’s importance as an academic center for fashion and design, Glen singled out Joyce Brown, president of FIT, which received $50 million in funding to expand its campus.

Before Thursday’s event, Glen said she and industry supporters are working on a comprehensive real estate strategy for designers and apparel manufacturers that may be complete within the next 12 months. The aim is to create “enough options and swing spaces,” she said. “One of the tragedies of the situation right now is that it’s so constrained when companies outgrow their spaces…Where can we begin to really have much larger chunks of space that will allow these companies to grow, as we finance them and incentivize them? It would be terrible if all these great new designers start making stuff in New York and then they have to get out of Dodge because we’ve run out of space.”

Another Made in NY activist, Theory chief executive officer Andrew Rosen, agreed. Before Thursday’s official remarks, he mentioned how he first used local factories in 1997. “Instead of saving the garment center, I think we need to invest in the garment center. It needs evolution. Just keeping it the way it was is not the answer,” Rosen said. “Factories need to be modernized. Leases need to be extended for longer periods of time. Rents need to be fair so manufacturing can flourish. There are a lot of issues that need to be addressed.”

Encouraged that the de Blasio administration is “very interested” in the fashion industry and is picking up on the work of former mayor Michael Bloomberg’s administration, Rosen said, “The Garment Center needs to be re-conceptualized. It doesn’t work well, really. It’s too dispersed and manufacturing is not protected there. The rents are increasing. The leases are short. We need to protect the manufacturing infrastructure. There’s got to be a lot of work done to really look at that.”

Modernization is another key factor, according to Rosen, who has built a Gansevoort Street design center for product development using the latest technology. “What I’m interested in is having manufacturers invest in new equipment and in new technology — that’s what’s really going to move the industry forward. There are all new printing techniques, laser techniques, heat-sealing,” he said.

As someone who knows firsthand about the benefits and liabilities of manufacturing overseas, Rosen said he also understands “that the prices in China have skyrocketed for traditional manufacturing. And as the marketplace is wanting more speed, domestic manufacturing is much more viable — certainly at the high-end. And when you look at all of these young companies that have grown into big businesses — Rag & Bone, Alice + Olivia, The Row — all of these guys basically had to start manufacturing in New York. It’s the combination of designers working with manufacturers that create innovative product.”

Surprised by “the degree to which people really roll up their sleeves and are regular workaholics,” Glen, a former Goldman Sachs executive, said they are thinking in very specific ways about what needs to be done to advance the industry — including real estate needs, access to capital and integrating more young, diverse people to the industry. “I’ve been surprised how willing people have been to take time to talk about all the things that are really not the glitzy stuff. I’ve been really amazed and excited by that,” she said. “Of course, it’s a working industry but even really important figureheads are spending enormous amounts of time. I talk to Andrew [Rosen] every day. Diane [von Furstenberg] has been really involved, literally sitting in my office saying these are the things we need to do to improve this industry…I thought they would be delegating that to their worker bees. But the leaders in the industry are totally committed.”

Assoulin said her collection’s production is “living, breathing for us at all times. It’s not like just pack it off and see how it develops. It’s really collaborative. I don’t think we could have done it without the access we have living in a city like this. And we say that all the time.”

Her husband Max, who is also her company’s chief executive officer added, “It’s true. We couldn’t have done this in any other city. When you’re born and bred in New York, you can’t imagine doing it anywhere else either.”

Seeing bigger brands’ commitment to local factories is added reassurance, Assoulin said. “You’ll see Ralph Lauren pieces and Oscar de la Renta pieces go by. That’s a very strong sign of confidence for a young designer that you’re in the right place where they’re keeping that craft, that technique and level of expertise alive for you. I don’t think it could rest on the backs of small designers alone.”