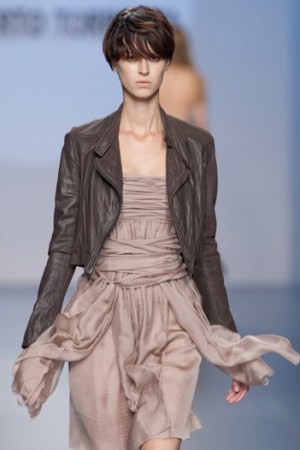 MADRID — Spanish designers at Cibeles Madrid Fashion Week came up short on edge, long on déjà vu — and commerce was clearly on their minds.

Strong-shouldered minidresses — wrapped and draped — flooded the runways alongside a bevy of Eighties references, graphic pattern mixes, tactile fabrics, transparencies and loads of black, blue, some tropical brights and peach.

Marking its 25th anniversary, the Cibeles catwalk shows that ran Sept. 18 to 22 in the Madrid fairgrounds featured 56 designers, 20 more than last September, including a batch of newcomers and the return of such iconic names as Adolfo Dominguez and Roberto Verino.

Fashion week here doesn’t draw an international crowd except for 21 editors from Asia, Eastern Europe, Portugal, Mexico and the U.S. invited by the Ministry of Commerce’s Spanish Institute of Foreign Trade. With a budget of $4.7 million, organizers confirmed, Cibeles is not a heavily financed event.

Dominguez got off to a bumpy start. The music failed, models walked in eerie silence, and Dominguez came out to apologize, saying music is “the language of God” and what finally came into play was not his and decidedly not what he had in mind. It was the first time the Galician-born Dominguez had been seen on a Madrid runway in a decade.

Verino sent out a mix of nostalgia and contemporary styling he called “lustful chic,” which translated into short and long dresses, mainly in black with sexy back treatments, transparencies and lingerie details. Exceptions to the somber palette were two flirty wrapped lemon yellow cocktail dresses in silk crepe.

Like other major designers here, including Sybilla and Dominguez, Verino, who is supported by his own industrial infrastructure in northwestern Spain, dropped out of Cibeles after years of fast-paced, thematic shows to steer the company’s retail expansion. The brand sells through 50 stores in Spain, 14 sales points in Mexico and has additional franchise agreements in Greece and Riga.

Agatha Ruiz de la Prada referenced Cibeles’ 50th edition by sending out 50 models in her signature M&M’s candy colors of orange, yellow, turquoise, lime and red. New this season were a few denim pieces from her just-launched jeans line, easy pattern-mixed dresses and separates, stripes of every ilk and width, cork platforms with glitter hearts and color-coordinated espadrilles by Castañer, and more gimmicks — a runway-long wired caterpillar effect, for example — than usual. For the first time in several years, the flamboyant designer will not show in Milan.

Amaya Arzuaga continued with architectural cuts and signature volume plays for stylized party clothes. The local press compared her collection to “origami and the movement of butterfly wings with a snail-like geometry.” The Madrid-based designer worked with swaths of pleated tulle and organic cottons in smoke gray, white and black.

José Castro’s second Madrid presentation featured high visual impact and parrot colors such as yellow, red and green, a series of strong-shouldered short dresses with bold prints, Swarovski crystals and elastic paillette sequins, a few peplum styles and snakeskin and feathers. A graduate of London’s Royal College of Art, the 38-year-old designer is one of the few Spanish designers to have shown in Paris.

Roberto Torretta kept it simple with a grouping of draped ladylike dresses and liquidy tops with suggestive décolletés, slimline pants and an unadorned two-piece suit and trench in silver glazed linen.

Off Cibeles, Carmen March tossed a pink Champagne show in a downtown alleyway linking her showroom and three-level store. March said she wanted her 25-piece collection to be “light and airy, like a lemon sorbet.” She presented streamlined minishifts, a tailored linen pantsuit, long slinky jersey dresses and cocktail suits with slightly bunched skirts in glittery fabrics. Peach was a featured color, also sand, gray and soft celeste blue .

March called the reaction to New York Fashion Week’s collective video presentation with fellow Madrid designers Ana Locking, Juanjo Oliva and Juan Duyos, “fantastic. I was very happy with the turnout [reportedly about 250 people]. I couldn’t have expected more for a first outing.”