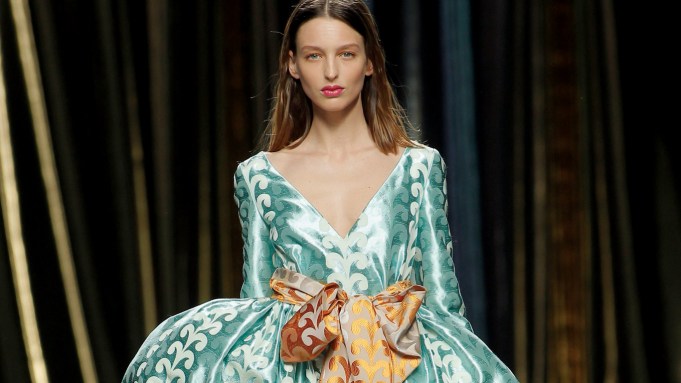 MADRID — Like the rest of the international fashion world, some established Spanish designers are beginning to consider consumer orientation.

For instance, at February’s Mercedes-Benz Fashion Week Madrid, held at the fairgrounds here, the roster lacked a prominent domestic player and veteran participant — Roberto Verino. The designer of men’s and women’s wear, who hails from the northern region of Galicia has shifted gears, he said, in order to focus on his principal target: the shopper.

“The decision to leave the Madrid catwalk from here on is based on the need to apply our energies to a specific concept, which is e-commerce,” he added. “We have a significant growth potential, especially online. We’re in France, Italy, Belgium and Holland and it’s time to work on our online initiatives with vigor and coherency. What difference does next winter mean to the consumer when he or she is looking to buy for spring? These are different times that require new ways of doing business. There is a need for immediacy.”

The Verino brand, which includes shoes, handbags and fragrances, had a 2014 turnover of 35.3 million euros (about $39 million) with a retail network of 177 sales points in Spain, Portugal and Mexico — 80 of which are corners in El Corte Inglés department store chain.

Simultaneously, the Spanish growth domestic product grew by 3.2 percent in 2015, its strongest showing since 2007 (the beginning of the economic crisis) and across-the-board domestic spending is “reactivating,” with a 5.1 percent increase in textile and apparel sales last year, according to Acotex, a clothing retail lobby group headquartered in Madrid. With dates once again running concurrent with the London fall runway shows, foreign buyers were in short supply at fashion week, according to a spokeswoman for IFEMA, organizer of the Spanish capital’s fashion events. Nonetheless, IFEMA clocked roughly 55,000 visitors — including consumers, bloggers, press, fashion groupies and designers’ guests — during the five-day event, she said.

“Spanish designers are working harder than ever, maybe because the market is picking up or because young design here is coming in strongly,” said one local industry source. “Fashion week was nice and positive but it’s still a platform that is not well-defined. Outsiders don’t know what they’re going to see. Is it couture or ready-to-wear, and is it available in stores? This kind of definition is still in the air; it’s all mixed up and because of it, we don’t really see lots of buyers yet, either domestic or international.”

The 63rd edition of Madrid Fashion Week featured 42 designers — the same as last September — including 11 newcomers under the Samsung Ego banner. In general, they sent out Seventies references, mini-length dresses and skirts and one-piece dressing; velvet, metallics, layers and sultry eveningwear.

Undoubtedly garnering maximum attention was Felipe Varela, 47-year-old couturier know here as a dressmaker to Queen Letizia of Spain for over a decade. It was a comeback of sorts; Varela, who is intensely private, was last seen on the Madrid catwalk in 2002. He sent out a straightforward message based on a slew of minidresses, silky and lingerielike, under chinchilla, mink or fox jackets and vests. There was heavy hand-beading, lace, a little sheer and shapely front-slit evening gowns — all in black, gray, white and red.

Agatha Ruiz de la Prada opened her show with a robot, and came up with “a rock-punk-Mod-pop melting pot,” according to program notes, including lots of mix-and-match casual knits and separates in signature brights: red, orange and berry; logo prints, stripes and traditional heart motifs; a few simple sheath dresses and shiny metallic, some looks more successful than others. The multitasking designer — who is said to have upwards of 50 licensees from cellphones to house paint — has added three new lines to her growing roster: stationary, chairs and house-cleaning products.

Ana Locking always has a maverick message, says designer Ana González. For the coming season, her collection, dubbed “Antihero,” is based on “the anonymous hero, a secondary man, who stumbles and falls but gets back up and begins again,” she said, as if to explain why bomber jackets — a major theme — and handbags hung down the back like parachutes. There were mini lengths and long wrap skirts, embroidered florals, loads of sequins and Donald Duck (the quintessential antihero) motifs on dresses and sweatshirts. Colors ranged from military green and soft turquoise to black, foggy gray and white in mohair, tweed, wool and cotton. González sells to China, Kuwait, the Czech Republic and Indonesia. In the U.S., she recently inked four new accounts in Brooklyn and the Hamptons. The label also showed for the second consecutive season at the Intercontinental Hotel in Paris.

Once again, Madrid-based label Alvarno by cocreative directors Arnaud Maillard and Alvaro Castejón garnered critical praise for attitude and high energy in their fall collection. The duo referenced Austrian painter Gustav Klimt and his stunning “Woman in Gold” with capes and structured outerwear, asymmetric dresses, pants and trapeze skirts in mix-and-match patterns and contrasting material combinations such as a print-lined napa bomber jacket with chiffon. Complex silhouettes with razor-sharp cuts featured hand-painted gold detailing, eagle motifs, signature zippers and embroideries. The designers mixed Neoprene with tweed and crystal trims, while key colors were black and gold, along with sapphire blue, burgundy and purple.

Founded in 2009, the Alvarno brand opened its first store last year on Madrid’s tony Calle Hermosilla. According to a spokeswoman, retailers and clients from the Middle East, Asia and Miami attended the show. Besides their work for Alvarno, Maillard and Castejón head up the design team for the Paris couture house Azzaro.

With a coherent statement mostly for men and a few women’s styles, Etxeberría sent out a slick series of long-length overcoats in fox fur and leather with tech fabric mixes, pieced-together patterns and patch pockets. The palette zeroed in on earth tones, gray and sand while women were cocooned in multicolored feathers and top-to-toe white.

The Muñoz twins, Aitor and Iñaki, co-owners of Ailanto, a Catalan women’s brand with international accounts in the U.S., Japan and Taiwan, took as inspiration the landscape paintings of Canadian artist Lawren Harris. It was a singular take on femininity with exclusive signature geometric and botanical prints in autumn shades of forest green, ochre, stone and black. There were lots of saleable coats, jumpsuits, cropped pants, longer-length dresses and layered mix-and-match patterns.

Fronting an artisanal company with a bespoke product range, Teresa Helbig marked her 20th year in business. The Catalan designer sent out a recap of the Helbig woman — coats and separates in luxury textured wools and one-of-a-kind hand-worked fabrics, rompers, girlish minidresses and shorts (staples of the house), high-rise pants, plaids and velvet with intricate beading. She sells by appointment only from her showroom/atelier housed in a 1905 Modernist building in Barcelona’s shop-heavy Eixample neighborhood.

Angel Schlesser knows from tailored, quality clothes and for fall, he opted for the best of both — simple, clean shapes for outerwear, separates, jumpsuits and slender black evening gowns, always the Madrid-based designer’s strong point.