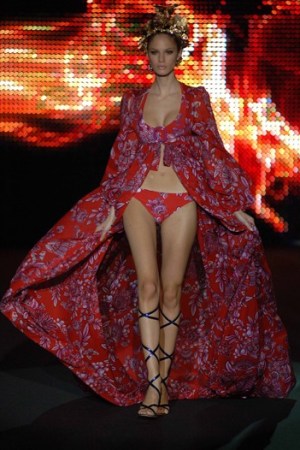 This story first appeared in the September 23, 2008 issue of WWD. Subscribe Today.

Cibeles Madrid Fashion Week (formerly Pasarela Cibeles) has a new name and a new home in the fairgrounds’ Hall 14 but the runway shows, held Sept. 15 to 19, continue to attract few foreign buyers.

“More than just a name change, it’s an ambitious makeover plan and Madrid’s new face in an effort to internationalize the fashion shows here,” explained Luis Eduardo Cortés, president of the organizer’s executive committee. He said designer subsidies for the September event increased 13 percent — to 3 million euros, or $4.3 million at current exchange.

Referring to the present economic turmoil and weak consumer spending in Spain, director Cuca Solana reasoned, “In moments of crisis, if you don’t make changes, you go under.”

With triple the space and two catwalks, the event brought in 40,000 visitors — a 20 percent increase over last February’s edition, organizers said, including 60 foreign journalists, scattered local retailers, special guests and a few celebrities.

Mainly a domestic women’s ready-to-wear platform with a few key designers traditionally spiking their collections with a men’s wear range, Cibeles Madrid Fashion Week featured 36 designers and a lively group of young talents who showcased their wares on and off the runway during the five-day run.

Some of the highlights were:

• Carmen March, whose references to Rawhide-Americana was one of the week’s snappiest collections with a barrage of pretty checks for jumpsuits, rompers, short dresses and mid-to-long swing skirts; sheer blouses; denim; ticking stripes worked into easy shirtdresses, and clean, oversize leather totes.

Cotton and linen fabrics are 100 percent organic, custom-made in Japan and assembled in her Madrid atelier, she said. In her sixth season at the Cibeles shows, 34-year-old March sells through her shop on Callejón de Puigcerdá, the Spanish capital’s hot retail alleyway.

• The front row at David Delfin was a celebrity happening with film director Pedro Almodóvar and his cronies — Rossy de Palma, Bibiana Fernandez, Miguel Bosé and Madrid’s power retailer Elena Benarroch. Less of a maverick this season (but what was with those surgical breathing tubes?), Delfin presented an endless series of one-piece outfits, silky rompers and microshorts in pink and black.

• José Miro sent out texture-conscious silhouettes like supershort dresses with peekaboo details in muted shades of eggshell, sand and stone; asymmetrical jumpsuits, and a knit poncho-dress.

For the first time in recent years, there was no trade fair running in tandem with Madrid Fashion Week.