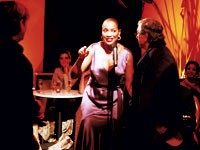 The cast read like a social registry, with Tinsley Mortimer, Somers Farkas, Gillian Hearst and newly born soap opera star Jennifer Creel lending their statuesque frames for the camera. They seemed right at home in Norris’ gilded dresses and the velvet booths of Salon, a new nightclub that was once a ballroom at the turn of the 20th century. The four-minute film will be used primarily as a look book, unless De Niro wants to use it to pursue a more public singing career.

Admiring the picturesque scene, a publicist called Fabian Basabe to assure him his wedding party there next week would be safe and sound, despite an unauthorized online posting of the details.

Champagne flutes in hand and Chopard jewels around their necks, they mingled and whispered, taking in De Niro’s Cole Porter tune. Radiant in a lavender silk gown, De Niro warmed up with each take, of which there were only three in the first go-round. Impressive even for her husband, tucked away in a corner booth, who nodded approvingly and smiled beneath his baseball hat.

The parents of director Andrew Le Pera agreed, flashing their son a thumbs-up sign. “It was hell yesterday — 15 hours,” Le Pera told them.

Maybe so, but the crew sailed through with what they called “Teamsters’ speed.” For Norris, the movement of the presentation was appealing, as well as each woman’s distinctively different style, whether it be Edwardian equestrian or Jean Harlowe-inspired chic.

“For me, it was sort of magical to dress so many types of women,” she said. “I want to go back there tonight, but it’s not there.”